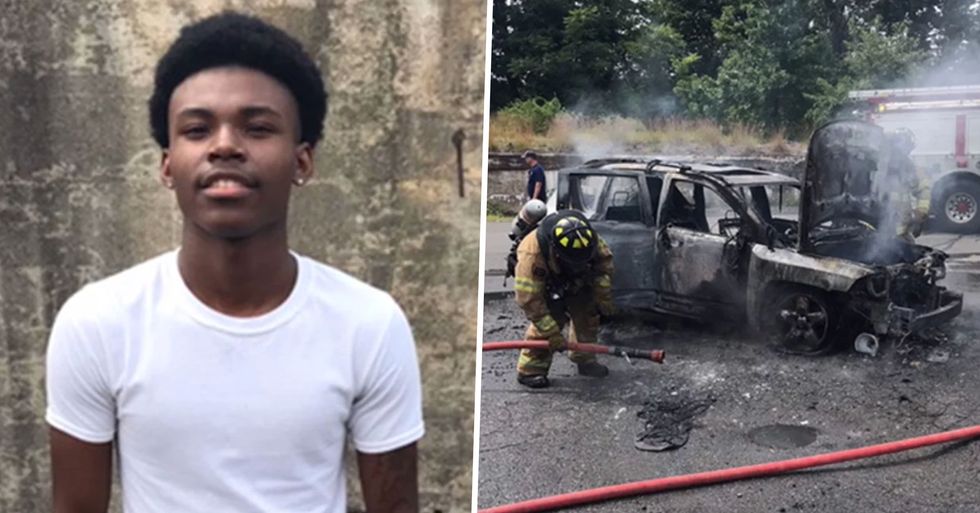 A teenager saved a mother and her 3 children by bravely pulling them out of a burning car.

Now, this is true heroism...

Heroes come in all shapes and sizes...

And it's true when they say that not all of them wear capes.

When we're faced with a disaster...

More than often, our life-saving instincts kick in and we will do whatever it takes to ensure others are okay.

But some people go that extra mile...

And they will literally risk their own lives to save others.

Now, this brings us to today's unbelievable story.

A teenager in Connecticut has been hailed as a hero after he saved a mother and her 3 children from a burning car.

Eighteen-year-old Justin Gavin was walking down the street on Wednesday when an SUV drove by him...

But he immediately noticed that the SUV was on fire.

He desperately tried to get the driver's attention, who seemed oblivious to the flames.

At that point, the department had received several calls about a car on fire with a woman trapped inside...

So Justin wasn't the only one who was concerned.

But without an officer on the scene, Justin took it upon himself to run to the vehicle and help the woman to escape by opening its door.

"I just felt like if I was in that situation, I would want somebody to help me out... I guess my instincts took over."

After rescuing the woman, Justin then noticed there were also 3 children inside the car...

Which was rapidly becoming engulfed in flames.

The flames didn't phase Justin, however.

"As the flames grew larger, Justin pulled all 3 of the kids from the car, including a 1-year-old baby in a car seat," Captain Michael DaSilva said in a video on the department's Facebook page.

The woman and all 3 of her children were ultimately saved from the uncontrollable flames.

"It kind of got scary because I didn't know whether I was going to be able to get everyone out in time," he told CNN, "And luckily, I did."

And his story has now been shared worldwide.

The coin is typically only given to officers who demonstrate an act of bravery.

"One of the things I do to recognize people’s heroic feats or excellent work, I provide them with what’s called a challenge coin," Fernando told Justin in the department's Facebook video. "It’s just to acknowledge this heroic act that you conducted today, and just a token of my appreciation for you being a great member of this community."

For more heroic stories, keep on scrolling to read about the tragic story of the teenager who died saving children from a treacherous river...