Once up in the air thrill-seeker Renee was the first tandem jumper off the plane. | 22 Words 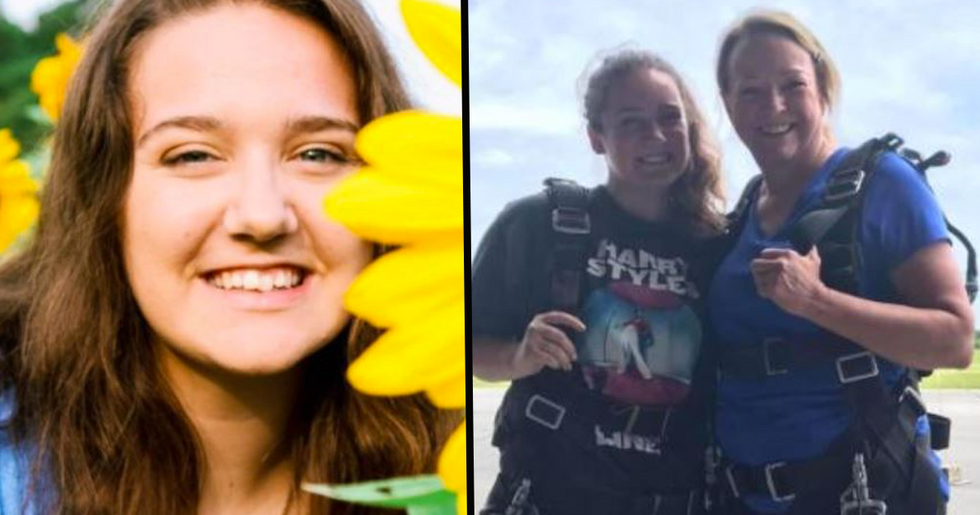 Sky diving is one of the crazy things, often on a bucket list, that a lot of people would never do.

The biggest fear is it going wrong, and whilst it is extremely uncommon, but can sadly happen.

However, devastating, one girl and her instructor have tragically lost their lives after their parachute failed to open.

Keep scrolling for this tragic story.

We all have a list of experiences that we want to tick off of some sort.

And for others, thats marking memorable or celebratory moments.

Some opt for more scenic experiences.

Such as visiting Paris' Eiffel Tower or the famous canals of Venice.

Others are pretty adventurous- Activities such as skydiving and bungee jumping aren't off the cards.

One teenager, wanting to mark graduating high school, picked to do something that many of us would never.

But, what should have been an amazing celebratory experience...

Was instead a tragedy.

As her parachute and emergency parachute failed to open.

And it had devastating consequences.

Jeanna Triplicata, aged just eighteen had chosen to celebrate her graduation from high school by skydiving.

She and her family had gone to Skydive Atlanta in Thomaston on Sunday, July 12 for the experience which should have been one of the highlights of her life.

Doing the skydive alongside the teen was her 60-year-old grandmother, Renee Sands.

For both of them, it was the first time they were doing anything like this. And for Jeanna, it was only her second time in an aircraft.

Once up in the air thrill-seeker Renee was the first tandem jumper off the plane.

And for her, the jump went as it should.

And once she reached the ground, she couldn’t wait to catch up with Jeanna.

And to swap stories of their experiences and no doubt talk about incredible it was.

But Jeanna was taking a long time to come down.

Jeanna's dad, Joey Triplicata told CNN that her entire family including her parents, grandma, brother, sister and her sister’s friend were waiting for her on the ground.

As time passed and the family hadn't heard anything, some members began to panic.

But her father said that some told them that she must have landed in the field by the airport, which happens sometimes. So the family obviously rushed over.

On their way, Triplicata said, "We had heard somebody say that they saw cop lights."

And that was when they knew that something was wrong.

Her father explained to CNN, that as they approached the field a couple of sheriff's deputies were there.

He said, "He tells us that it doesn't look good and that's when we lost it."

Jeanna and her 35-year-old experienced instructor Nick Esposito died after the parachute malfunctioned.

The pair died on scene Upson County Sheriff Dan Kilgore said in a statement provided to CNN. He also added, "Upon exiting the aircraft, the primary parachute failed to open properly and went into a spin," Kilgore said in the statement. The emergency parachute deployed at a very low altitude but it never fully opened."

The day should have been an incredible experience for the family, but instead was one of the worst days.

"She wanted to just see how things look up in the air that high. She had never experienced that. It was a lot of first times for her and it was supposed to be a great, great day and it turned out to be the worst day of our lives."

"I hate that this tragedy is the reason why people are going to learn more about her and her life. The tragedy has happened and at this point, we just want Jeanna to be remembered as the person she was, which was a wonderful young lady."

Trey Holladay, Skydive Atlanta owner said in a statement, "Our community is devastated for both our team member and the student and their respective families."

"We are all stunned and truly at a loss for words as we are a close-knit family. We have spoken with the next of kin and all are asking for privacy while we process and grieve."

Her family is hoping that the authorities will investigate what happened.

He stated, "I hope and pray that we will eventually know what happened. I want this never to happen again… so a parent, husband, a wife, a daughter will never have to go through this again."

A GoFundMe page has been set up and the money raised "will be used to pay for her final farewell and support for her family during their very long painful grieving process."

You can donate to the page, here.