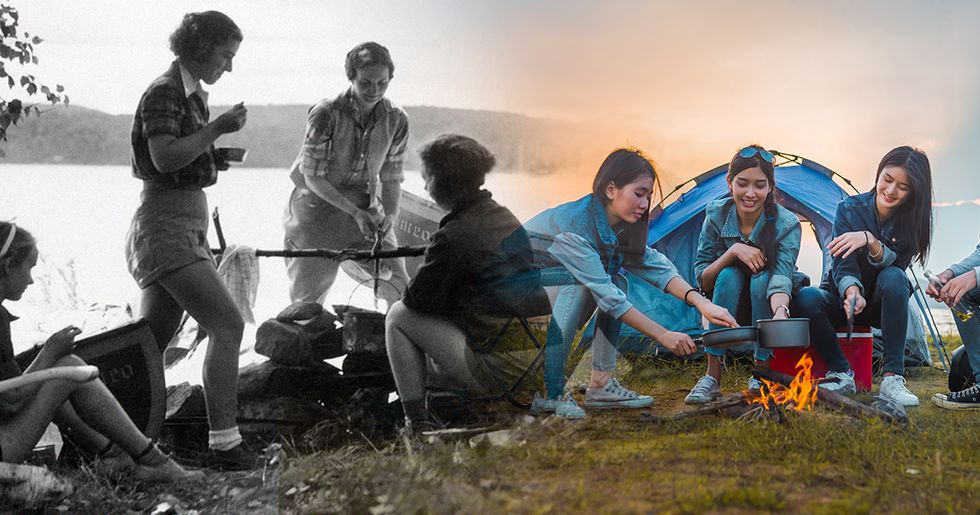 From camping and carnivals to glamping and music festivals, summer sure looks different today than it did even ten years ago. But we unearthed some of the coolest photos of summer in the '50s and '60s to show you exactly what's changed (and what hasn't) in seventy years of some of America's oldest summertime traditions.

Some things have gotten better, and some things have definitely gotten worse. We've upgraded from tents made out of tarps to comfy "tiny houses" being towed by pickup trucks with running water. We've gone from archery lessons to playing Angry Birds on our iPads.

But at its heart, summer vacation has stayed the same. A time to get outside for a few extra hours a day and relax. Get your mind off of some of your stresses, whether that be schoolwork of work-work, and get some me-time. The only difference is how we spend that time.

Let's start with this glorious photo from 1955.

Three College students getting ready for their shifts as counselors at Yosemite where they're being employed for the summer. It just feels so quintessentially 1950s.

I love that kids were taken to camp en masse by trains, instead of massive SUVs like they are today.

Although I suppose busses are still pretty popular these days.

Say goodbye, kids! You won't see your parents for the next week, or maybe ever again once that homesickness kicks in on day three.

Suddenly, little screen monsters have taken over our lives.

I don't know why this trend, in particular, is so interesting to me. Maybe it's just because trains are less popular in general these days.

She's already homesick and she hasn't even left the station.

I can relate... One year my parents sent me to "extended camp" while they went on vacation, and I thought I was going to be there for forever.

"On a sidewalk, a young boy plays with a toy gun as another watches him, and both wait for transportation to summer camp."

Well, this is definitely something we wouldn't see today. Please don't bring guns -- real or fake -- to summer camp.

Sometimes it feels like kids are always on their phones.

Sometimes they're climbing up on rooftops...

These girls are doing their morning arm circles before starting their day, which is hilarious.

I honestly can't imagine going to a summer camp that threw us out in tents. Camping, yes. Summer camp, no. I don't know why.

Just imagine that instead of reading comic books like these kids are in 1967...

The kids in 2019 are looking at Thanos memes and dead Iron Man in memoriams.

Or they're doing this...

Listen, we ALL spend too much time on our phones. Kids and adults alike.

But back to the past. I can literally hear the whistling.

These teenagers at a Navy Camp are going on a butterfly hunt.

Oh shit they caught one.

They hurt the bugs.

The brutality shown to these butterflies will never be forgiven.

Honestly, the haircut and clothes on this girl could make me believe this is 2019.

But it's the 1930s! She's making a scarf or something else useless on a loom near the lake.

At least campfires are still the same.

Hopefully, they're all telling stories about the boyfriends that they definitely have back home. Or was that just a thing that boys did?

These girls are dressed a little differently than their '30s, '40s and '50s counterparts!

The end of camp talent show is gonna be lit.

And by lit I mean, jump into the campfire because the music is so bad. But at least they're having fun!

Here are some campers and counselors from Camp Kinder Ring in 2019.

Honestly, it looks like they're having a great time!

These '50s girls play guitar to entertain each other.

Picking up the guitar has to be easier than trying to learn the trombone in a week.

"A camp counselor demonstrates knitting to a group of girls sitting on a bench outdoors, 1950s. One girl in the group practices hammering a nail instead."

Bless that one girl who's thinking, "I'm not interested in knitting, I just want to smash stuff." We've all been there.

Here are some girls learning about crystals at camp in 2019.

This is part of a teen mindfulness camp! Bet they didn't have those in the 1950s...

Even the boys get in on the jewelry making!

Who would have known toxic masculinity is only a thing of recent history?

I love that we would get letters from our parents at camp.

We were only gone for a week or two, and yet it was so important that we got our mail.

And sent our postcards!

Our parents needed a full breakdown of everything that happened every day at camp.

Now we can just send a text!

No camp is complete without a lake, river, or pond.

Because then how would you wake up at 5am for the annual Polar Bear Plunge?

A canoe seems much more inviting than just jumping straight in.

But honestly, I haven't seen a canoe in ages. When did we all decide we were switching to kayaks, and why?

A slip-n-slide, which honestly is kind of an upgrade.

Did anyone else feel immense pride when it was your turn for flagpole duty?

Maybe this was just my camp, but we had to wake up before sunrise to raise the flag. And being selected was a really weird honor. It meant that you were cooler than all the other campers and you could get your food first at dinner.

Let's turn our attention to this camp in Wales. Because it's freaking nuts.

Here are some kids wrestling in 1934.

This one is in England, but that's basically just Wales' older brother.

It honestly looks like just a bunch of boys running around causing havoc so their days at school are calmer.

At least this little British kid is seated.

Prior to this photo being taken, he was probably chasing a counselor around with a flaming arrow or something equally insane.

At least us Americans had weird things like this.

Honestly, whose dad hastily threw this together before camp started, and what is it? An excuse to get injured? Maybe.

This is my favorite.

I went to summer camp during peak Lord of the Rings and there was nothing I wanted to do more than become an expert archer.

"Members of the National Capital Ballet Dancers dressed as wood nymphs for a dance rehearsal at their summer camp in 1925."

First of all, this is way too elaborate. Second of all, our end of summer camp talent show was full of dumb pre-teens trying to tell their best yo-mama jokes. And I was one of them. I wish I were kidding.

But honestly, this was always the best night.

It had that sad mix of "we're going home," with the excitement of being able to win bragging rights one last time. The last night was always the best night.

No matter what year it is, summer for teenagers is all about having fun with friends.

I wonder what summer in 2050 will look like?! Keep scrolling to see more of what teens are like today. I think the kids call it "extra."