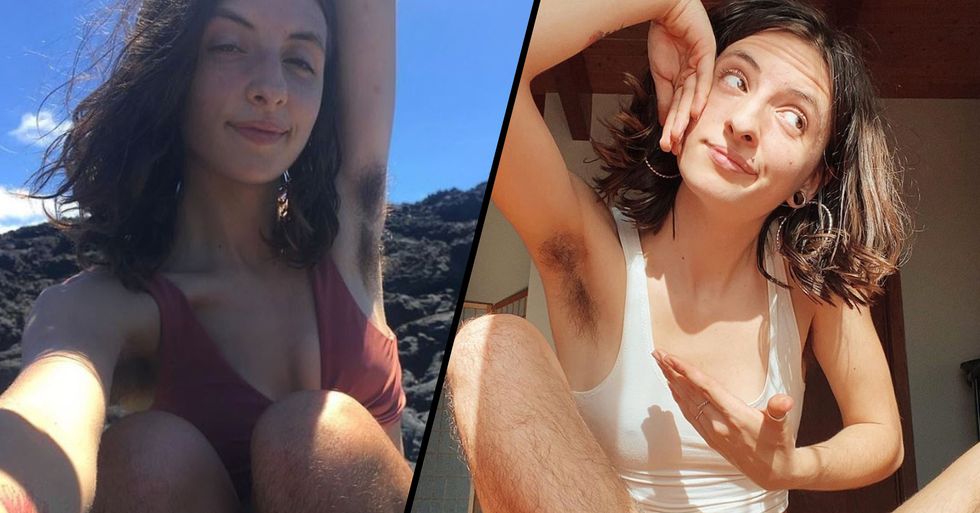 We can all relate to the fact that there is an immense amount of pressure put on us on a daily basis to look immaculate.

Shaving our legs, underarms and bikini lines seems to be the done thing, but for some people, it most certainly isn't.

One young woman from Nevada has decided to completely stop shaving her body hair, and it is the best thing she has ever done.

So many women dedicate a lot of time to shaving their body hair.

In today's society, we are surrounded by beautifully waxed women in the media who appear they have never grown a single hair on their body.

These unrealistically smooth goddesses on our screens have set a very high standard...

And us women find it almost impossible to constantly look this immaculate without a lot of hard work.

And the human body, regardless of gender, is going to naturally grow hair... whether we like it or not.

Too many men and women feel insecure amidst the high beauty standards of our society...

And it's time that we start embracing our natural and beautiful selves.

One woman from Nevada decided to do just this.

This is Macey Duff, and she is nineteen-years-old who currently lives in Hawaii.

Macey started shaving at the age of ten...

"For what reason? Just because all the women around me did it, being taught it was what women should do," she said in an interview.

Macey felt she had to maintain the standards of society...

And she spent 6 years feeling too ashamed to let any of her body hair grow.

She developed a very negative attitude towards her own body hair...

"I would shave any time hair began to grow; I was fearful of anyone even slightly glancing at my armpits, legs and bikini line if I had any visible stubble," Macey explained. "I struggled with accepting myself."

Her obsession with being immaculate was unhealthy.

"With every cut and razor burn from the repetitive motion of swiping away, I was silently despising myself for not being who they wanted me to be – I was angry and frustrated with these conditions."

Her twin sister, Ally, spotted a woman in a one-piece bathing suit showing off thick leg and armpit hair.

Macey recalled, "I felt empowered just hearing about it, although I didn’t witness it personally. I saw a woman on Insta soon after and she had a photo of herself featuring her leg hair that was dark and apparent."

"My world shook when I witnessed a woman with body hair for the first time. I could not even describe the relief I felt knowing that there were women out there defying the standards placed for us to appeal to the public eye as ‘beautiful’ and ‘sexy’ – even ‘worthy’."

And from this moment of inspiration, Macey and her twin sister decided to stop shaving completely.

But she admitted that initially, the thought was scary and it was daunting at the thought of what others would think.

It was a little bit uncomfortable at first...

"I felt inspired and soon experimented with growing out my own body hair. I love it. It was frightening to say the least," she said. "Lifting my armpits in public at first was scary. The stubble was uncomfortable during the first few weeks, yet I can hardly even remember that period because now my hair is long and soft."

It's a case of being patient...

"But I was able to get past that stage of prickly itchiness. With each new day my hair began to get softer. I grew a very personal connection for my own body. I felt this intense awareness because I no longer felt numb to the atmosphere around me," she explained.

She now feels more empowered than ever.

"I've not used a razor blade since," she explained.

But of course, Macey has received negative comments about her body hair...

"I have had people directly point at me and whisper over to the group/person they are with, gawking and laughing at me," Macey said. "I have had words like ‘you should’ve been thrown away in the trash’, ‘too ugly’ and ‘too disgusting’ to ever have a partner."

But she luckily has a very supportive family and friendship group...

"My family was very supportive, my two sisters and I all stopped shaving and my mother eventually was inspired to discontinue shaving her armpits... My twin sister and I even dyed our armpit hair for fun in the beginning months. Many friends were inspired and empowered by this, and some of them too stopped shaving."

This is the best thing that Macey has ever done for herself...

"I am empowered by the doors it has opened for me, into a happier, less stressful, and inspiring life. I have never known myself so intimately until I stopped shaving. I didn’t really know who I was until I stopped. It is a journey towards deep self-love," she went on to say.

Macey is the perfect example of why we should do right by our bodies...

And we shouldn't be inspired by the unrealistic images that are presented to us in the media on a daily basis. Keep scrolling to learn about the Instagram models who are leading the body positivity movement by example...