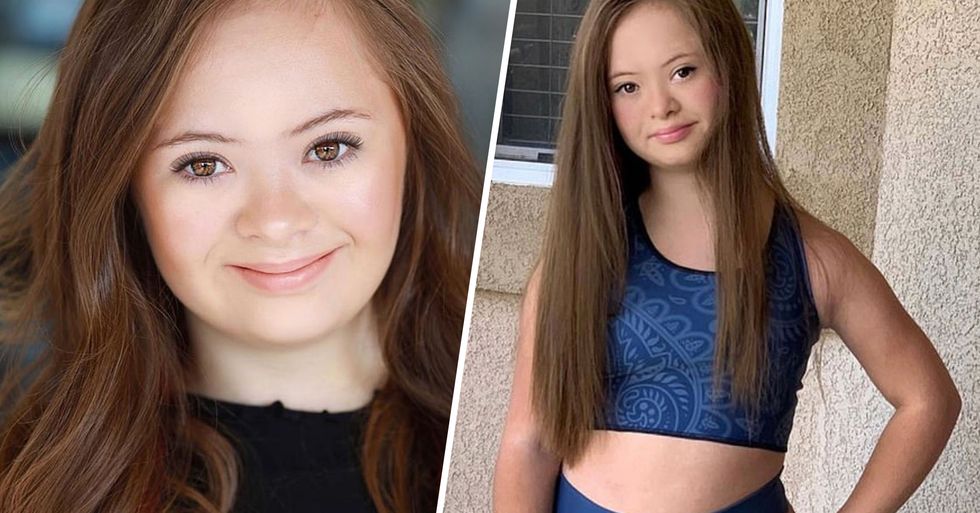 A few people inside the fashion industry have been making a push for inclusivity. And recently, that push is visibly paying off! We're seeing more and more people represented through fashion, in terms of body type, ethnicity, and more.

That progress is super important; we need to see more of the world reflected in fashion. So it's especially notable that a model with Down's Syndrome is making waves in the industry especially after doctors told her parents that her quality of life is not going to be positive.

Keep scrolling to see what she did to prove them wrong...

It's been there for a very long time: despite calls for change, the same kinds of models crop up over and over again. Instead of diversity, we see white models with one body type, one skin type, and complexion.

Time to change that.

People are asking to see models of varying skin tones, models of every body type, and beyond. And in some cases, those demands are finally being satisfied!

She has recently been making waves in the industry.

The teen has been signed by modeling agency Paloma Model Agency and flies around the nation for photoshoots and promotional events.

She's even been booked to give speeches.

Kennedy has become somewhat of a public figure in the country and that's because her story is so inspiring.

She's not had an easy journey.

When she was born, the doctors at the hospital warned her mother, Renee, that Kennedy might not have a good quality of life.

They also said it might be best to institutionalize her.

The doctors gave their predictions, telling her mom that her daughter might have to wear diapers, even as an adult.

She claimed that they pained a very "bleak picture" of what the future would look like.

But then something amazing happened...

The very next day, she came into contact with a midwife who took one look at her daughter and gushed about beautiful she was. The midwife also had a child with Down's Syndrome. This one little interaction gave her the confidence and hope.

However, Kennedy's battles were long from over.

She had to battle leukemia and also underwent a surgery to correct a spinal deformity that could have left her paralyzed as a child.

The surgery involved wearing a metal frame for 6 months.

This frame was screwed to her skull and even when she was in this condition, she managed to remain positive by watching dance videos online.

And once she recovered, she started taking dance classes.

"She was absolutely in her element, and we haven’t looked back since," her mom said.

This is all possible because Renee was determined to give Kennedy a better life.

According to Metro, her mom has worked hard trying to give her the best life possible.

And now, Kennedy has a successful career and relationship.

The teen has an impressive resume, after having modeled for American Girl, Justice Clothing, and Disney.

Look how beautiful she is!

And she has proved to all of us, that nothing is impossible.

Imagine defying all the odds and having a successful life and career even after health professionals predicted her downfall before she even made it to her teen years.

"She has brought so much joy and laughter into our lives..."

"[Kennedy] has grown into a gorgeous, funny young woman with the world at her feet," her family said. She is incredibly close with her siblings and is a breath of fresh air according to them.

Kennedy also has a boyfriend who she has been with for 3 years.

Matthew, nineteen, also has a genetic condition, but he didn't let that stop him from coming over and introducing himself to Kennedy with a good ol' pick up line.

It was pretty cheesy, but hey, it worked!

According to Renee, he placed his phone in front of Kennedy and said: "I think my phone's broken because it's missing your number." Yes, Matthew! We love a bit of that confidence!

And it's been uphill ever since then.

"I couldn’t believe what a smooth talker he was but I loved how brave and funny he was. I knew then he and Kennedy would be great friends, but at the time, Kennedy said she didn’t understand what Matthew was talking about."

Renee had to then explain that Matthew liked her!

Kennedy couldn't believe it! She was extremely thrilled and the couple started Facetiming and they even attended the homecoming dance together too!

The teen and her mother are determined to raise more awareness about the quality of life for those affected by Down's Syndrome.

Her mom said this:

"She and I co-run her Instagram where her followers are made up of lots of different walks of life. It’s been so neat to see the different backgrounds they come from, the support they give her and the questions they ask simply because they want to understand."

But ultimately, she just wants her daughter to be happy.

"I have no doubt she will continue to grow into an independent, strong, amazing adult whether she is acting, modeling, going to college, public speaking or finds her passion elsewhere in the workplace. I just hope she continues to live her best life no matter what." If you want to read another heartwarming story, keep scrolling.