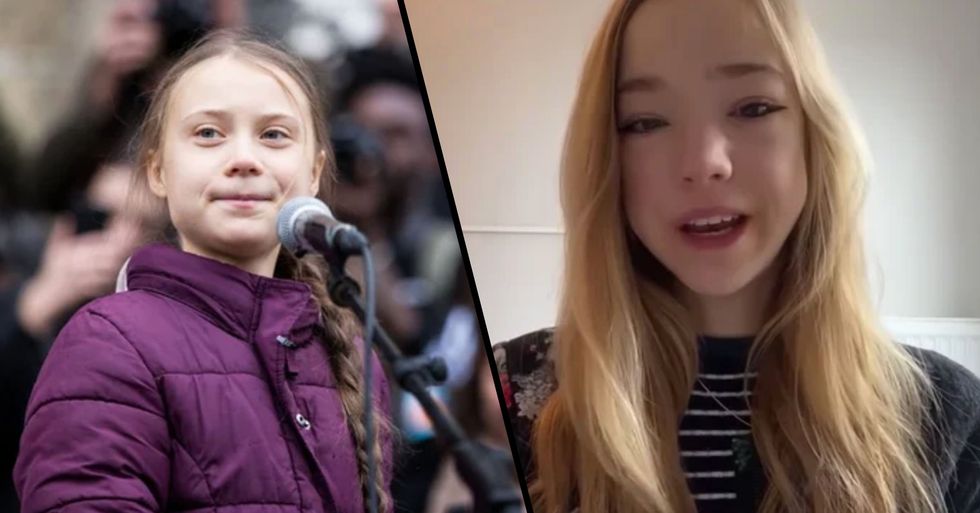 Watch out, Greta Thunberg, there's a new teenage activist on the block.

Naomi Seibt is the latest protester to make headlines, but for slightly different reasons to her Swedish counterpart - She believes that climate change is a hoax, and wants to promote "climate realism".

We've all heard of Greta Thunberg.

The sixteen-year-old environmentalist has made waves in the climate change movement in the last couple of years.

Starting one day in August 2018, a then fifteen-year-old Greta decided to skip school to sit outside Sweden's Parliament in Stockholm with the simple sign, “Skolstrejk För Klimatet" - translating to “School Strike for Climate."

Within a year, Greta's message had spread like wildfire...

Greta attended numerous marches and protests all over the world and was even invited to the UN Climate Conference in New York, which she traveled to on a zero-emissions boat.

The activist blasted world leaders and politicians for their lack of action regarding climate change. "How dare you," she said. "I shouldn't be up here. I should be back in school on the other side of the ocean, yet you all come to us young people for hope. How dare you?"

Greta has become the face of the youth climate change movement.

But, despite Greta's clear message...

There are some people who have been inspired in other ways.

Following Greta's viral success, Naomi has been inspired to fight for what she believes in...

Which is that climate change is not real.

The nineteen-year-old admits that she once believed that the world was amidst a global crisis...

And would frequently rally behind environmentalist policies and the uprising of youth climate activism.

The teenager now works for The Heartland Institute, an American think tank that publishes conservative and libertarian content.

In her new role, she preaches about "climate alarmism"...

An expression that is used by global warming skeptics to describe scientists and commentators who stress the catastrophic effects of global warming and climate change.

And she wants to spread her message to the world, just as Greta has done with hers.

"I have good news for you. The world is not ending because of climate change," Seibt declared in a YouTube video for the Heartland Institute. "People are being force-fed a very dystopian agenda of climate alarmism that tells us that we as humans are destroying the planet and that we, the young people especially, have no future."

She believes that there is a "lot of fear-mongering going on"...

And claims that she has done her own research into the matter. "I do not believe that the climate is changing because of manmade CO2 emissions. And if it was, I don't believe that would have such a detrimental effect," Seibt told Insider.

The teen is working hard on spreading her message...

And she encourages others to do their own research into the matter. "This mainstream narrative of fear-mongering and climate alarmism is holding us hostage in our own brains," Seibt said in another video for Heartland. "Don't let an agenda that is trying to depict you as an energy-sucking leech on the planet get into your brain and take away all of your passionate spirit."

But she doesn't want to be seen as "anti-Greta".

"I'm not this evil opposite of Greta — she might be a really nice girl and I would love to talk to her someday," she explained.

And she doesn't want to be known as a "climate change denier".

In an interview, she explained that “especially as a German, it is so rude to refer to someone as a climate denier because obviously there is a connection to the term ‘holocaust denier’, which carries a lot of weight in Germany." Makes sense.

You can watch one of The Heartland's controversial videos here...

And decide for yourself whose team you're on. But for most of us, climate change is real, and it's happening at an alarming rate. And one man thinks he has the solution - cannibalism. Keep scrolling for the full story...