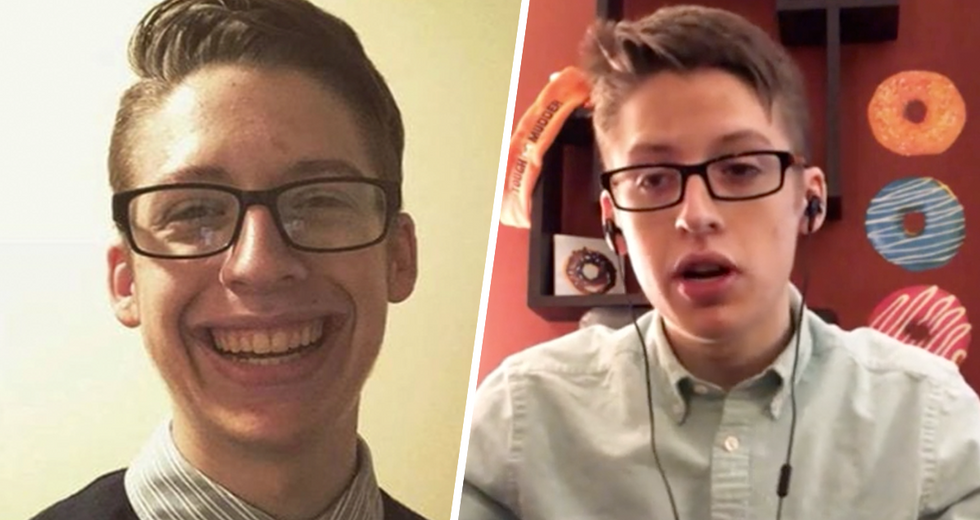 Welcome to 2019 the year that things go from weird to completely bizarre. In this week's version of "could, this get any more 2019" we have a story about a teen rebelling in the most mature way we could possibly think of – health care. While that may seem completely un-rebellious, if you grew up with anti-vax parents it's the ultimate act of rebellion.

Yeah, you read that right. We've finally reached the point where those unvaccinated kids are growing up and making their own decisions. While some of those kids might agree with their parents, we're about to introduce you to one interesting young man who did his own research, came to his own conclusions, and now wants to make a different choice.

And while we're on the topic of vaccines, this is your periodic reminder that there is literally no scientific data supporting the idea that vaccines cause autism so vaccinate your kids!

Let's start with the beginnings of the anti-vaccine movement.

In 1998 a doctor named Andrew Wakefield released a paper that connected the MMR (mumps, measles, and rubella) vaccine with autism. The concept went viral (pun intended) and led to a decrease in vaccinations.

Hold up – do vaccines cause autism?

The only problem with Wakefield's article is that it wasn't factual. Numerous studies have tried to replicate his findings and none of them have been able to.

Oh, and that Wakefield guy? He's not such a great dude.

Perhaps the worst part of the whole thing is that in 2010 Wakefield was banned from practicing medicine in England because of the unethical practices he used in his studies. Not only that but just a year later evidence arose that showed his data was fraudulent.

So why is the anti-vax movement so popular?

A few things happened between Andrew Wakefield and today that propelled the anti-vaccine position into the spotlight. Jenny McCarthy said her son's autism was because of vaccines, and she began creating anti-vaccine groups. Parents became concerned over the presence of thimerosal in vaccines. And autism rates rose.

But why are we talking about this now?

If you do the math, Wakefield's original paper came out just over 20 years ago. That means it's been nearly 20 years since the first crop of kids grew up without their vaccines thanks to his "research." These kids are coming into their young adulthood, and it's no surprise that they have some thoughts about vaccines.

Oh, and also because diseases like the measles are starting to resurface.

Thanks, anti-vaxxers! Most of the diseases we vaccinate against were completely or close to eradicated. But just this year we've had outbreaks of measles. Delightful.

So imagine you're just turning 18, you're not vaccinated, and dangerous diseases are starting to return. What would you do?

This is Ethan Lindenberger.

Ethan's mother takes a strong anti-vaccination stance. She's been convinced that they cause autism and brain damage. That's why Ethan grew up unvaccinated.

Ethan takes a pretty different approach to vaccines from his mother though.

"My parents think vaccines are some kind of government scheme. It's stupid and I've had countless arguments over the topic. But, because of their beliefs I've never been vaccinated for anything, god knows how I'm still alive."

That's a lot of chutzpah kid.

Ethan tried to talk to his mother.

After learning about vaccines from teachers and online research, he shared a CDC article stating that vaccines don't cause autism.

"That's what they want you to think." Oof.

Ethan was not impressed.

"I was just blown away that you know, the largest health organization in the entire world would be written off with a kind of conspiracy theory-like statement like that," he says.

Here's where it gets exciting.

Ethan just turned 18. Why is that important? It's the age at which our young man can start making health decisions for himself. And boy is he going to. Happy birthday, Ethan!

Rules about vaccines vary by state.

When someone turns 18 they are 100% in control of their medical decisions. But for kids growing up with anti-vax parents, the guidelines aren't consistent. Some states allow kids 12 and up to receive the Hepatitis B vaccine or the HPV vaccine. Others require a parent's consent.

Even with the lack of consistent information, Ethan made sure he was educated.

Not only did he research vaccines himself...

Ethan shares "When I started looking into it myself, it became very apparent that there was a lot more evidence in defense of vaccinations, in their favor."

He also learned about the best places to be vaccinated.

Sure, he went to Reddit for advice, but after posting in November he received thousands of suggestions and found a clinic he liked.

So Ethan performed his first act of adult rebellion.

He got vaccinated! What an awesome birthday present.

It's the gift that keeps giving.

Of course, it's important for young adults like Lindenberger to realize that vaccines aren't a one and done deal. He will need to go in for shots three times over six months. Yowza.

How does mom feel about this?

Unfortunately for Ethan, his mother was not too happy about the situation. She says “It was like him spitting on me, saying ‘You don’t know anything, I don’t trust you with anything. You don’t know what you’re talking about. You did make a bad decision and I’m gonna go fix it.’" Oof. That's one heck of a guilt trip.

Parents, listen up! Just because your kid comes to a different conclusion about an important matter from the one you did, that doesn't make it about you.

Parents just don't get it.

We're all for this kind of rebellion.

While the choice to vaccinate a child is ultimately up to the parent, it's nice to see how much support Ethan is receiving for going against the grain. All the science supports it.

Not only is Lindenberger keeping himself safe, he's protecting other people.

It's called herd immunity, and it's incredibly important for vulnerable people.

Every person who gets vaccinated protects people who can't.

If enough people get vaccinated, diseases don't spread. That means people who medically can't get vaccinated (I'm looking at you cancer patients) are safe.

There's a surprising number of these kids out there, researching for themselves and finding out that vaccines are actually incredibly important.

Ethan is even taking it a step further and educating his siblings.

After talking with them, he's found that his 16-year-old brother “wants to get vaccinated the moment he turns 18," while his 14-year-old sister “fully, whole-heartedly agrees with my mom."

Of course, parents are also talking to their kids.

Ethan's mom,  Jill Wheeler shares: “It has opened my eyes to say ‘I better educate them now. Not wait until they’re 18.’ But I need to start educating my 16-year-old, and my 14-year-old now, saying this is why I don’t believe in it."

Even if it's caused family backlash...

We still support you Ethan.

Isn't it fun to worry about fatal illnesses?