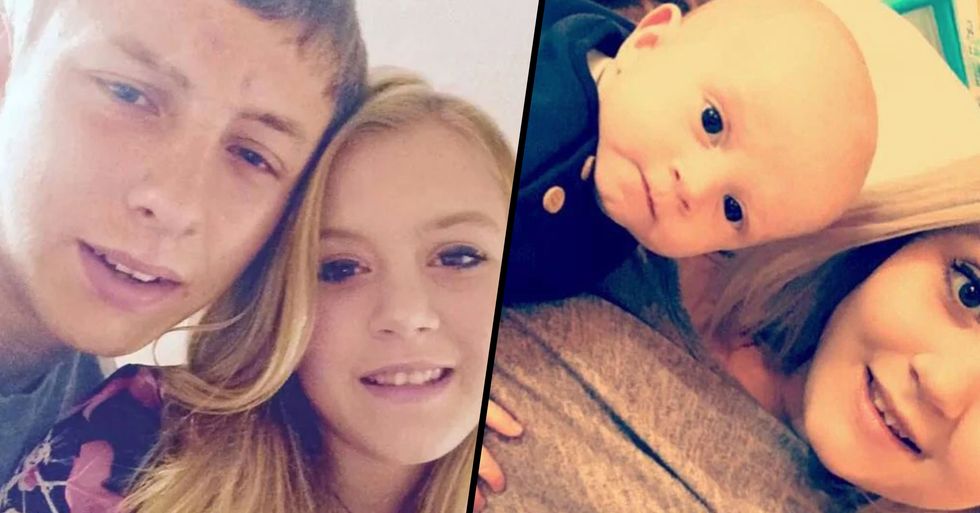 AIt's never a pleasant experience being rushed into hospital... especially when you're in a lot of pain.

But one young woman experienced the shock of her life when she was taken to hospital with "appendicitis" and she left with a newborn baby instead.

Visiting the hospital is never a fun trip...

But, of course, when a person is in a lot of pain and they are concerned about their health, a trip to the hospital is of the utmost importance.

The majority of hospital patients leave feeling refreshed and at ease...

But not everyone leaves with what they were expecting.

This was certainly the case for Courtney Evans...

Courtney, who is now twenty-one-years-old, was rushed to hospital back in 2016, when she was seventeen, after complaining of severe stomach pains.

Courtney was oblivious as to what was about to happen...

The young woman, who is from Northamptonshire in the U.K, woke up on the morning of September 24th, 2016, with severe "period pains."

She complained to her partner, Bryn.

Courtney said in an interview, "When I woke up it felt like period pains, I just felt like I was having a bad stomach. I was on and off sleep as it was early hours in the morning waking me up. I woke up my partner, and said, 'I'm in a lot of pain now'."

Bryn didn't know what to do, so he took Courtney to his mom's house.

But when the doctors had a look at her...

They discovered that she was, indeed, thirty-four weeks pregnant.

Courtney had noticed a small amount of weight gain...

But it was never enough for her to believe she was pregnant. "I'm a bit bigger anyway so it wasn't just on my stomach, you wouldn't look at me and think I was pregnant, it was very weird. Another doctor came to look at me and felt my stomach and did a scan, they looked at me and said, 'that's your baby'. I remember saying 'are you joking?'."

We can only imagine how overwhelming this must have been for the teenager.

"They took me into a separate room on my own and did a few tests and then they took me down to the labor ward. All they could see was his heartbeat and I had to have injections in my back for his lungs. They had his incubator waiting outside when I gave birth," she explained.

Because of the shock, Courtney spent 4 days in hospital but she and her new baby were both in good health.

It took Courtney a few hours to adjust to her new role as a mom.

"They put him on me and I couldn't hold him at first. It wasn't that I didn't love him, but I was in so much shock. I just needed a minute after giving birth to the child I didn't know I had. So when everyone was going 'here's your baby boy', I was just thinking, 'Oh god, I don't know what to do'," she explained.

Unlike the majority of new parents, the young couple were not prepared... at all.

"I was in a lot of shock, we didn't even have one diaper, and I was living with my parents at this point. My mom and dad had to go out and buy everything," she said. "Usually you have nine months to prepare but we had no time. It's mad looking back thinking 'how didn't I know?' but I can understand why I didn't. They say if you even wee too much it can cancel the pill out, it can be anything."

Even though Courtney was using contraceptives...

It is a commonly known fact that contraception isn't always 100 percent effective.

Even though Leo's arrival was initially a huge shock for the couple...

"I wouldn't change it for the world now, he's my little best friend," Courtney said.

Courtney's mom helped her a lot with the first few weeks...

"I've never been around newborns in my family. My partner dealt with it a lot better than I did as I was in a lot more shock than he was," she explained. "He held him and fed him and changed him straight away, but he's been brought up with little brothers. I'd never dealt with a baby in my life whereas he had."

But, of course, she soon took to her new role.

"I've got a house on my own now and we've lived here for 2 years, but the first year of his life we lived there and I couldn't have done it without them [mom and dad]. Everybody told me I took to it really well, the first couple of weeks is just a blur to me looking back... I took every day as it came really - his feeds and baths - my mum has done it with me and my brother before, so she was telling me everything to do. She was helping me to hold his head in the bath and telling me how to feed him, everything like that."

Even though little Leo was "the best thing that's ever happened to her"...

Courtney is now on a new contraception method to prevent any other "little surprises." Courtney said, "I've been on the injections since I've had him and that seems to work for me, but different things work for different people."

Courtney's story goes to show that anyone can take on parenthood, whether you're ready for it or not!

Make sure to keep scrolling to learn about the smiling baby who got through 2 heart surgeries in his first few months...