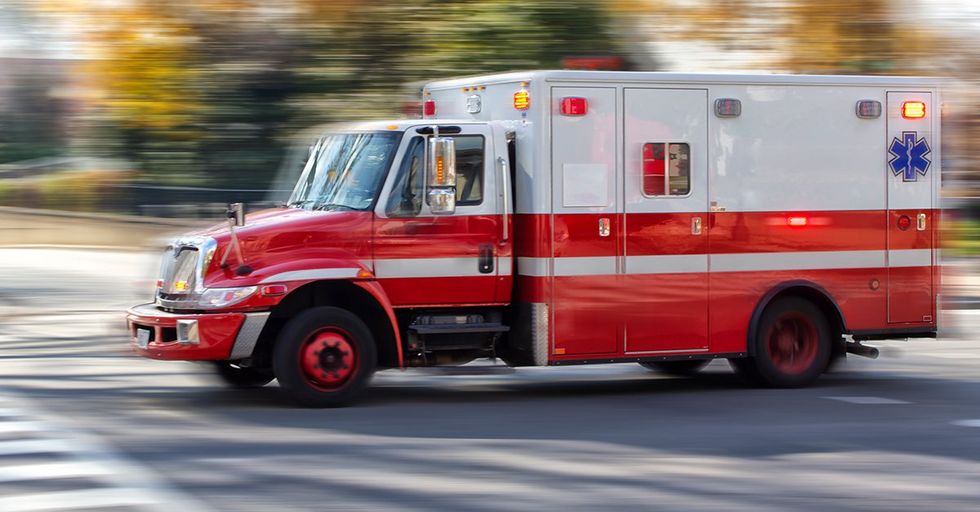 Sometimes you just need a feel-good story to brighten up your day. Because really, ours is a big world with plenty of good people living in it. And even though you might need a reminder of that from time to time...well, that's what stories like this are for.

One Indiana teen recently did an amazing thing. She spotted a man in trouble by the side of the road and immediately stopped to help. Thanks to her compassion and quick thinking, that man is alive today! So keep reading for the full, heartwarming story of a man in need and a teenager who rose to the occasion magnificently. You'll love what happened after the man's recovery, too!

Lexi Lindsey was having an ordinary day.

The high school senior was in a car, on her way to a Justin Timberlake concert in Indianapolis.

But then she saw something.

While driving down Indiana's State Road 37, Lexi saw a man staggering to the side of the road and waving his arms for help.

Then the man collapsed--still partially in the highway lane.

And by that point, Lexi had told the driver to let her out and began running over to help. “I screamed, ‘Stop the car!’" she told the Bedford Times-Mail.

As she ran, she was already dialing 911. She also pulled him fully onto the side of the road; an impressive feat as she was much smaller than he. “He was a pretty big guy," Lexi said.

The man's name was Brian Putt.

Brian Putt is a married father of two, a U.S. Navy veteran, and currently a worker at the Naval Surface Warfare Center Crane.

Brian was suffering from heart arrhythmia.

He had an implanted defibrillator, which had begun shocking his heart when Lexi ran over to help.

Luckily, Brian was able to tell her about the internal cardiac defibrillator and what was happening to him.

Other motorists were stopping.

They wanted to help, and a nearby construction worker began cautioning oncoming drivers to make sure none got too close to Lexi and Brian. But none of the people there had medical training.

Except for Lexi, that is!

That's because she'd been taking a Health Careers class in order to learn more about possible career paths in health care. However, the class also included CPR training, Stop the Bleed instruction and basic first air.

What she did next likely saved his life.

Because she was armed with that knowledge, Lexi didn't panic. Instead, she was able to figure out the best way to keep Brian alive until paramedics arrived.

“He was wearing a FitBit and I could see that his heart rate was extremely high," Lexi said. “I was ready to do CPR if I had to."

Brian began having a seizure.

But Lexi handled it. “I turned him on his side to keep his airway clear," she said.

Then the seizure passed.

Lexi began talking to Brian (though she didn't have his name at the time) in a calming manner. “He told me he had a heart attack in 2018 and that he had been feeling funky all day. … We called his wife to let her know what was going on," she said.

Thankfully, the ambulance made a swift arrival.

“He told me and the EMT told me that I saved his life," Lexi said. How amazing was she?!

As she went back on her way, she began processing what had just happened.

“I cried later from the stress," Lexi said. “I’m so glad I knew what to do. If I hadn’t had the class, I wouldn’t have known what to do."

Lindsey also told her Health Careers teacher what had happened.

“I love that she had the frame of mind to do what she did," her teacher, Heidi Myers, said. “She had the calm presence of mind and skills to take care of that man until help arrived."

“Even if our students don’t go into a health career, these classes introduce them to life skills. Because Lexi had taken the class, she was able to talk to him, tell him to take slow, deep breaths, which was very important," said Terri Briscoe.

The thing is, he was taken away without Lexi learning his name.

And for a little while, all she could do was hope that the man she saved was doing okay.

Then, she got an amazing surprise.

This week, Brian Putt came to her Health Careers classroom carrying a bouquet of flowers. Lexi recognized him immediately and burst into tears.

She never thought she would see him again.

But Brian had also wondered about the young lady who had stopped to help him and learned about Lexi through coworkers local to the area, who'd read a newspaper story about the ordeal.

He had come by to thank her for what she did, not only for him but on behalf of his wife, two daughters, friends, and family.

For Lexi, it was pretty emotional too.

“I’m just glad you’re OK," she told him. She had been wondering, but with no way to find out for sure.

Brian spoke both with her and the class a bit.

“After reading the article, I can’t imagine what that day was like for you," he told Lexi. “I’m guessing you were sitting in the car, singing ‘Bye, Bye, Bye’ and ‘Bringing Sexy Back’ … my daughter would do the exact same thing. When in the blink of an eye your life gets altered. That’s the way life works. You’re going down a path and it gets altered."

And he praised Lexi's actions.

“What made you stop? It’s something called character. What is that? It’s doing the right thing when no one else will," Brian told the students. “I was disoriented from the shocks of the defibrillator, but as soon as I saw the car pull up, I had a sense of calm and I knew I’d be all right."

Brian also had a message for the class.

"Anyone in this room could be a hero," he told them. "You don’t have to save a life, if you see an elderly person in the store, help them with groceries."

Brian began having heart arrhythmia a year ago.

“What that is, is basically your brain is telling your heart to do some crazy things," he explained. After that was when doctors implanted him with the defibrillator.

Then he went over the events of early April.

“For a year, everything went perfectly," he continued. The first time his heart had acted up again was on that highway, and in the hospital, he'd had a procedure called an ablation.

All in all, he should be fine now.

And Lindsey's calm handling of the situation definitely made an impression. “I’ve seen grown men in the Navy break down in stressful situations," he said.

And Brian had one more thing for Lexi.

The dolphin pin (a pin with two dolphins flanking a submarine) is a major award for members of the U.S. Navy sub fleet. “For 20 years, I was a submarine guy. The proudest day of my submarine career was when I earned my dolphins," Brian said.

He showed the class his dolphin pin. “special these, you earn them. I was awarded them Oct. 19, 1993." Then, he presented it to Lexi. "You earned them." Share this incredible story with your friends!