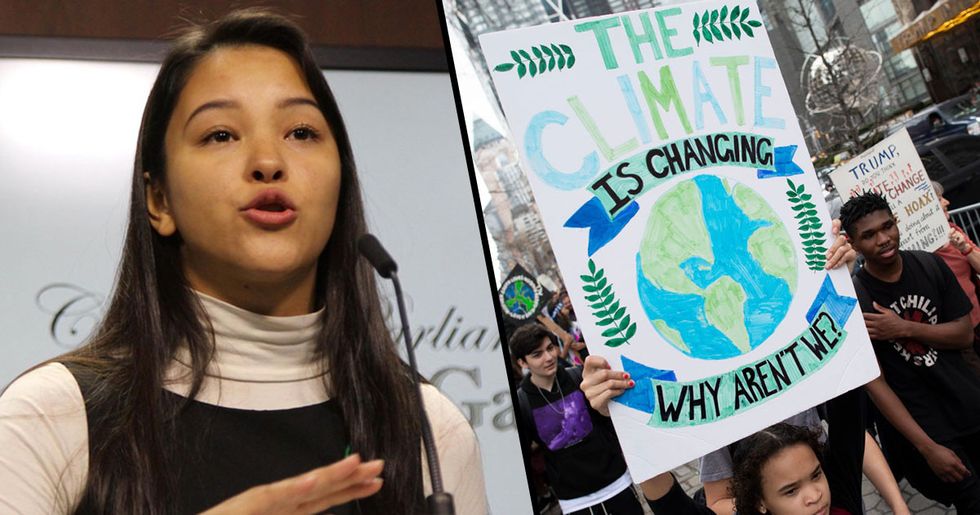 Climate change is no joke.

Stories of the effects of climate change which are steadily damaging our planet have been a hot topic in the news in recent years. Despite a number of officials across the globe taking steps in the right direction to tackle these problems, enough still isn't being done.

A group of teenagers have decided that enough is enough by pledging not to have children until their government takes climate change seriously. Keep scrolling to find out more...

Our Earth is essentially a greenhouse...

Earth depends solely on energy coming from the sun as half the light reaching Earth's atmosphere passes through the air and clouds to the surface, where it is absorbed and then radiated upward in the form of infrared heat.

The Earth is warming up...

According to NASA, scientists attribute the global warming trend that has been observed since the mid-twentieth century to the human expansion of the "greenhouse effect" - warming that occurs when the atmosphere traps heat radiating from Earth toward space.

Human action has lead to this...

Over the last century, the burning of fossil fuels like coal and oil has increased the concentration of atmospheric carbon dioxide, resulting in higher temperatures around the globe and ultimately destroying hundreds of eco-systems.

Many countries have come together in an attempt to battle climate change...

The Paris Agreement was built upon the convention to bring all nations into a common cause to undertake ambitious efforts to combat climate change and adapt to its irreversible effects.

President Trump, in typical Trump fashion, pulled out of the agreement.

Meaning that the United States was one of the only major nations to refuse to take part in the agreement, which will ultimately help to save our planet.

People were not happy about Trump's decision...

The president claimed that the Paris Agreement would "damage U.S. economy with the loss of jobs and vastly diminished economic production in key sectors." But shouldn't President Trump be eager to be a part of the agreement when the U.S. is the biggest carbon polluter in history?

One teenager was brave enough to stand up to the president...

Swedish climate activist, Greta Thunberg, delivered an urgent speech to Congress in Washington earlier this week, telling politicians to "wake up and face facts." "The U.S. is the world’s number one producer of oil. It is also the only nation to signal its intention to leave the Paris climate agreement because it was ‘a bad deal,'" she also said.

The biggest crisis humanity has ever faced...

"This is, above all, an emergency, and not just any emergency. This is the biggest crisis humanity has ever faced and we need to treat it accordingly... Stop telling people ‘everything will be fine’... Stop pretending you, your business idea, your political party or plan will solve everything," Thunberg continued to preach.

She urged Congress to "listen to the scientists."

Thunberg isn't the only youngster to speak out about climate change...

The movement asks people to hold off from having children until the government face up to the facts of climate change.

Speaking to Insider, Lim said: "I have always, always wanted to be a mom, for as long as I can remember." "But I will not bring a child into a world where they will not be safe. I would like to see the government develop a comprehensive plan to stay below 1.5 degrees of warming."

Her plan refers to a United Nations report that said the Earth has warmed 1 degree Celsius since the nineteenth century.

The report looks at the consequences of it were to warm 1.5 or 2 degrees Celsius.

Lim isn't just thinking about her own generation...

She also wants to see a plan put in place to help people who will be affected by climate change, including displaced people and people losing work in industries like agriculture, fishing, oil, and gas.

Youngsters tend to believe in their governments...

"When you're young, you believe your government will fix things, and so I joined the green team and we worked on recycling and I figured that everything would be okay," she went on to say. "But that trust in your leaders erodes over time."

Lim realized that she wasn't the only one who was scared about these issues.

She said that her friends are also losing hope. "I launched the pledge because I wanted other people to understand how the fear of climate is so unquestioned in my generation. It's something everybody feels. Where in my parent's or grandparent's generation, believing in climate change is often a matter of opinion and not survival," she said.

The movement kicked off on Parliament Hill in Ottawa on Monday morning...

Speaking to Vice Canada, Lim spoke of how she saw "massive changes" in her parents when they learned about her pledge.

People who haven't yet suffered from disasters caused by climate change need to be prepared for what may come...

"For the first time, the impact of climate change became real to them. You read about hurricane stories and heatwaves, but the massive, most catastrophic events haven't touched us yet in Canada. There's flooding but it hasn't really affected my immediate family. But this hurts; this is something tangible," she said.

According to Insider, more than a third of American Millenials think that climate change should be a factor in a couple's decision about whether to start having children or not.

Rep. Alexandria Ocasio-Cortez made headlines when she suggested that people were concerned about having children because of climate change...

"Our planet is going to hit disaster if we don't turn this ship around ... there's a scientific consensus that the lives of children are going to be very difficult," she said via Instagram live. "And even if you don't have kids, there are still children here in the world, and we have a moral obligation to leave a better world for them."

Will the government take notice of this movement?

Only time will tell,  but it is looking pretty unlikely that President Trump will be shifting his opinion on this crucial matter any time soon. Keep scrolling to read about that time when Donald Trump claimed that climate change was a myth because, and I quote, "it was cold outside"...