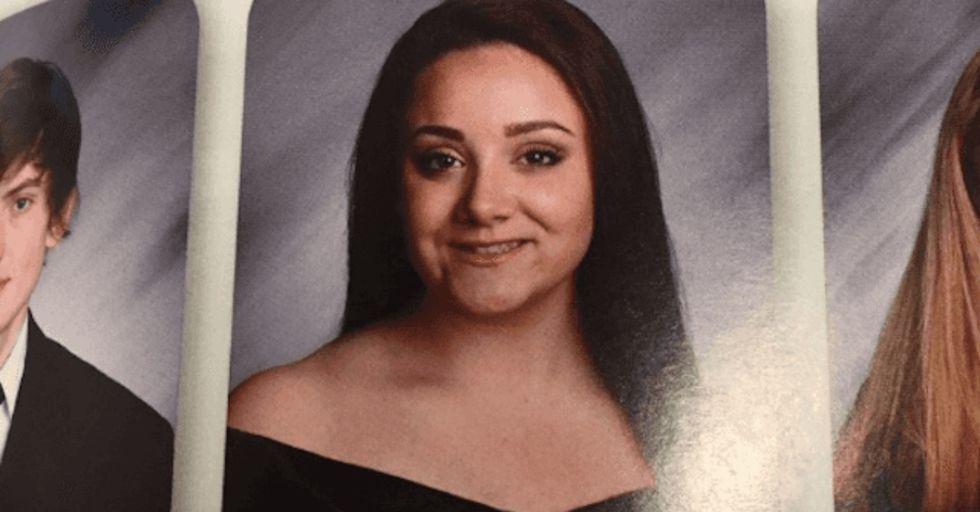 Much has been said about the double standard and questionable enforcement of school dress codes this year, so here is one more story to add to that list — with a twist.

Victoria DiPaolo, a senior at West Milford High School in New Jersey, had had enough of her school's conservative dress code, and decided to use the yearbook as one final way to fire back at the administration's seemingly hypocritical policy.

As we've seen with the rise of social media, funny yearbook quotes have a way of getting around.

More often than not, the jokes are just funny little throwaways.

As well they should be. It's not like these kids are preparing an inauguration speech or anything. Why not have some fun with it?

However, the yearbook quotes can occasionally touch on social issues.

But the still do so with a pretty great sense of humor. Most people are just happy to be done with school and don't want to go on any crusades, so they keep things light.

To the point of "social issues," we all know that school dress codes have been a hot topic recently.

Many students, especially female ones, view the dress codes as sexist and, at the very least, a giant hassle.

One girl decided to kill two birds with one stone on her yearbook page.

She offered a wry and clever commentary on her outfit and in doing so, one on dress codes and their ridiculousness as well. Take a look on the next page to see the magical post!

“I’m sorry, did my shoulders distract you from reading this quote?" DiPaolo’s quote reads underneath her senior photo.

The jab was at the school's dress code which prohibits “halters, half-shirts, shorts, or sweaters and blouses that expose breasts or stomachs," according to Yahoo! Style. So what was Tori's motivation? “I chose my senior quote because I found it ironic that the classic robes we take pictures in technically violated dress code," she told The Huffington Post. “Really, I just wanted to get a few laughs." "While my school, as well as most others, have dress codes that apply to boys and girls it’s usually only girls that get dress code violation," she continued. "My school’s dress code prohibits boys from wearing muscle shirts but they do all the time and don’t get in trouble yet, when my bra strap accidentally slips I have to miss class time to go change.

"I just think dress codes need to be enforced on both genders if you’re going to choose to have one. But really, people not being allowed to wear tank tops is ridiculous, no one is distracted by shoulders and that’s really where I got the inspiration for my quote."

But the reception DiPaolo has received from the quote has mostly been positive - including from her teachers. "After making this my quote most of my classmates laughed and complimented me. A lot of people also posted it on their social media," she told Yahoo! Style. “One of my teachers actually came up to me to tell me she loved my quote and thought it was hilarious. Most teachers have laughed at it. The general consensus at my school — unless you’re the principal — is that the dress code is ridiculous so people have loved the quote so far."

It's funny, but there's an important element of truth to her post.

Calling girls "distractions" for the way they dress is really no better than objectifying them in other ways. It's all counter-productive.

Lots of other people are speaking out, but they're not doing so in such fun ways.

They see it as a serious issue that needs to be addressed. That's no time for humor or laughs, in their opinion. It's a reasonable stance.

Retailers and websites are jumping on board with the protests, but many feel it's too little, too late.

Girls have been living this unpleasant reality for a very long time. They're speaking up, and people are FINALLY starting to listen to the grievances. As for the yearbook quotes, well, they're getting sharper than ever. The next page will instill faith in future generations.

Some kids shy away from social issues for the cheap laugh.

Others find humor in self-deprecation, which is understandable.

No one's at their best in high school, so we might as well have some fun with it, right? This kid sure did, and someone did the right thing by editing out his name!

As we mentioned before, when social issues do surface, it's normally in absurd ways.

A Honey Boo Boo quote? I guess that's your academic legacy! (It is pretty funny though, and if this is his way of coming out, more power to him!)

Then, finally, we've just got the rebels. Not the "dress code rebels making a point." Just...the rebels.

I'm not sure what the future holds for this guy, but I'm sure he's not going to take bad fortune lying down. Let's hope that "no" doesn't come up too much in this guy's future. He looks like he could use a break.

With all that in mind, let's send out the graduating class with a band and the best of our luck!

Whether or not they've managed to get a witty or provocative yearbook post, they made it through high school, and that's a pretty amazing achievement all on its own.