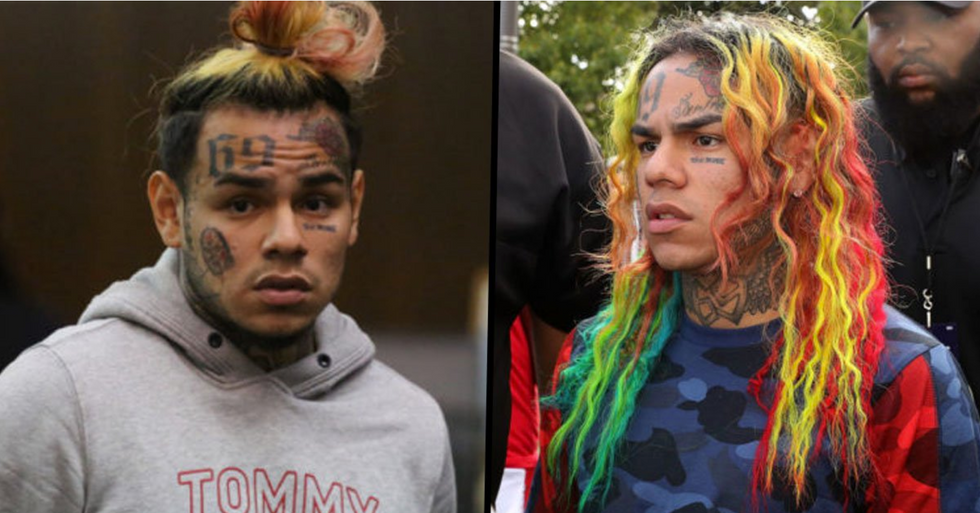 In January, Daniel Hernandez, or Tekashi 6ix9ine, as we more commonly know him, pleaded guilty to charges involving racketeering, illegal firearms possession, and aiding in attempted murder as part of the violent Trey Nine gang.

The "KEKE" hitmaker has been helping with the investigation into other members of the organization and has testified against his once fellow gang members and even identified individuals by pointing them out in the packed courtroom.

The latest development in his testimony was that fellow rappers, Cardi B and Jim Jones, were also members of the notorious Trey Nine Gang.

Hernandez sure seems to want to get free of his forty-year sentence, whatever the cost.

And it seems he may have been successful, as insiders claim he may be out as soon as 2020.

But, in January this year, he suddenly changed his tune.

The twenty-three-year-old rapper must be getting even more worried about whether he will be let off for his crimes. Yesterday's admission that Cardi B was a part of the gang reeks of desperation.

Cardi B might have shouted her mouth off about being a member in the past...

But she seems to have changed her tune. So what's changed?

Cardi B is riding on a wave of success.

Since her breakout in 2016, Cardi career has gone from strength to strength. The former stripper has come along way and had to fight tooth and nail to get where she is today. Now, in 2019, the star has cemented herself as one of the most highly successful female artists on the Billboard Charts. Cardi has also settled down a bit... now a mother, to Kulture Kiari Cephus, perhaps her priorities have changed. After announcing that she had broken up with long-term-boyfriend and fellow rapper, Offset, in December 2018, fans were devastated. However, after showing up at The Grammys together in February, it seemed they were back on.

Only good memories from now on...

Cardi B tweeted yesterday after the 6ix9ine's allegations seeming to say that she only wants to make good memories now.

Who knows who Takeshi 6ix9ine will claim was part of the Trey Nine Bloods Gang next? My money is on Megan Markle!

But it seems Hernandez's indiscretions may have paid off.

Since he gave evidence against Ellison and Mack, both of these criminals have been convicted.

The fact higher-up gang members have been convicted is good news for Hernandez.

As insiders have now revealed the star could be out of prison as early as 2020. As the case's star witness, his odds have significantly improved.

Hernandez hopes to get a 5K1 letter from the US Attorney.

This document would give the judge the right to reconsider earlier sentencing based on new developments in the case - possibly even taking Hernandez under the mandatory minimum sentence for his crimes.

Although, this may turn out to be a mixed blessing.

Hernandez is at least safe in prison. Once out, who knows what sort of punishment he could face on the streets?

Whether this snitching was a smart decision on Hernandez's part remains to be seen.

Although he has skilfully avoided a sentence which meant the rest of his life in prison. If you want to read more gang-related content, keep scrolling to hear all about the gang leader who escaped prison disguised as his teenage daughter. Heck, maybe Takeshi 6ix9ine could take some pointers!