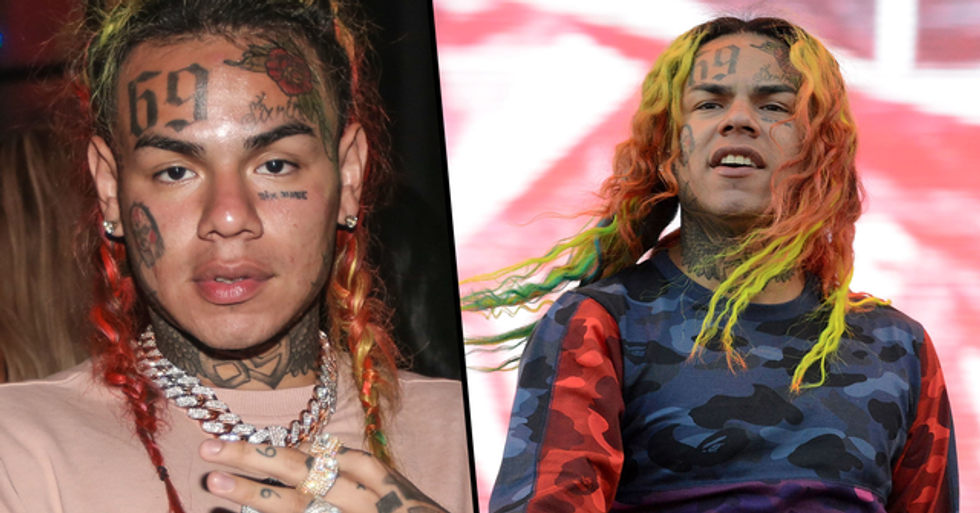 A photoshop wizard has given us a glimpse into what the controversial rapper, Tekashi 6ix9ine, could look like without his facial tattoos and multi-colored hair... And the finished result has shocked us all.

If there's one thing Tekashi 6ix9ine is known for, it is his rather eccentric aesthetic.

While some will know him for his music, and others for his controversial snitching, everyone will recognize the rapper for his heavily tattooed face and rainbow-colored hair. But what does he look like behind all the tattoos? Keep scrolling to find out...

But, out of nowhere, the rapper was suddenly released from prison just 3 weeks ago.

On May 8th, Tekashi released his new track, "Gooba", complete with a grotesque music video... And it has already surpassed 214 million views on YouTube.

It's clear to see that a little prison time has affected Tekashi's attitude...

And nor has it his eccentric style. The rapper's hair is as luminous as ever, and it is making us all wonder the same thing...

What would he look like without all the tattoos and hair dye?

It's pretty hard to imagine, isn't it? But now, one man has made this next-to-impossible vision a reality.

By completely removing all of his facial tattoos and hair dye. YouTuber, Mitchell Wiggs, enjoys photoshopped a wide array of tattooed celebs such as Post Malone, and this week, his latest project is Tekashi.

He painstakingly removed every single tattoo...

Starting with the creepy Jigsaw figurine on his cheek.

And then goes the infamous "69" forehead tat...

If you didn't think the rapper had too many facial tattoos before, you certainly will now.

Once erasing the tattoos, Mitchell then moves onto the hair.

He selects the multicolored top knot and fully erases it, before replacing it with... Drumroll, please...

The forehead and incredible hairline of Ricky Martin.

Anyway, Mitchell spends some time blending the skin tones together...

Until Tekashi has a convincingly normal head of hair.

And the finished result is remarkable.

He's quite handsome under all those tattoos, isn't he?

For a little comparison...

Without the tattoos and rainbow hair, Tekashi looks completely unrecognizable.

But for more of Mitchell's incredible photoshop work, keep scrolling to see how he transformed Post Malone...