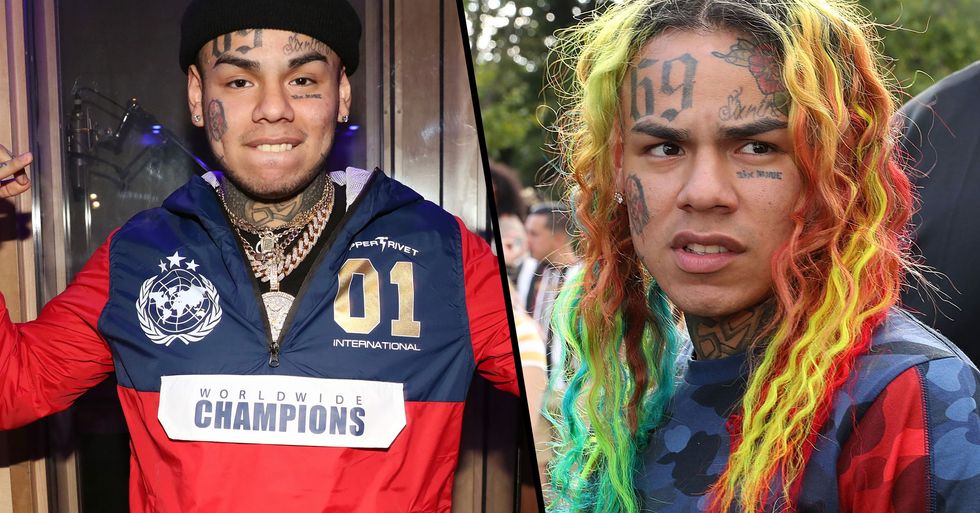 In December 2019, Daniel Hernandez, or Tekashi 6ix9ine, as we more commonly know him, pleaded guilty to charges facing him.

But the pandemic has been Hernandez's saving grace.

Keep scrolling to read how the star was released just 4 months after he was sentenced to two years in prison - plus his big plans now he's out again.

The rapid rise and sudden fall of Tekashi 6ix9ine...

He turned to selling drugs to make ends meet...

And this was ultimately when Hernandez's "Tekashi 6ix9ine" persona was born.

And Tekashi was allegedly a member of this gang...

And he agreed to cooperate with federal prosecutors in their investigation...

Altogether, he spent nearly 2 hours on the stand - wearing blue prison scrubs, a white undershirt, and still rocking his rainbow-colored hair, styled in pigtails. In a courtroom potentially filled with current or former Nine Trey members, he testified that he became a member on November 2017, and participated in violent crimes ... including shootings, assaults, and drug trafficking.

And many publicly disapproved, both of Tekashi's actions and his snitching... Because you know what they say! Snitches get stitches.

It's safe to say that Tekashi entered some seriously dangerous waters...

Anthony "Harv" Ellison and Aljermiah Mack were convicted back in October 2019.

Hernandez was originally facing a minimum of forty-seven years in prison.

But, since ratting out his fellow gang members, it was possible that the rapper could be released from prison as early as this year.

This is absolutely nothing for the crimes that Hernandez has committed...

And it turns out that he won't even be serving his full sentence.

The disgraced rapper was set to be released on the 2nd of August of this year, according to reports.

Of course, this is a drastic change from his original sentence...

But throughout the trial, the twenty-three-year-old cooperated with the authorities and helped inform on other gang members... meaning he got a much easier sentence.

But he has been released way earlier than August.

Why? Well, it's thanks, in no small part, to the coronavirus pandemic sweeping through the world right now.

The star has been released.

And if you're wondering what he'll be doing next, well, we have an answer.

Complex spoke with Tekashi’s attorney Dawn Florio, who confirmed the star would be back to making music ASAP.

"Yes, he can release music."

"What he’s gonna do is he already has that advance for 10K Projects. So he has to put out a Spanish album and an English album. So that’s what he’s going to do."

"We were actually trying to figure out the logistics of how that’s going to work."

"It’s more difficult because of the coronavirus because you don’t want strange people coming in to set up a studio where he’s going to be."

"He already got an advance for all those millions of dollars. So he’s gotta put out those two albums as soon as possible. I can confirm that from Bob."

We have to say, we're kind of interested to see what he comes out with ... Want more gang justice? Scroll on ...