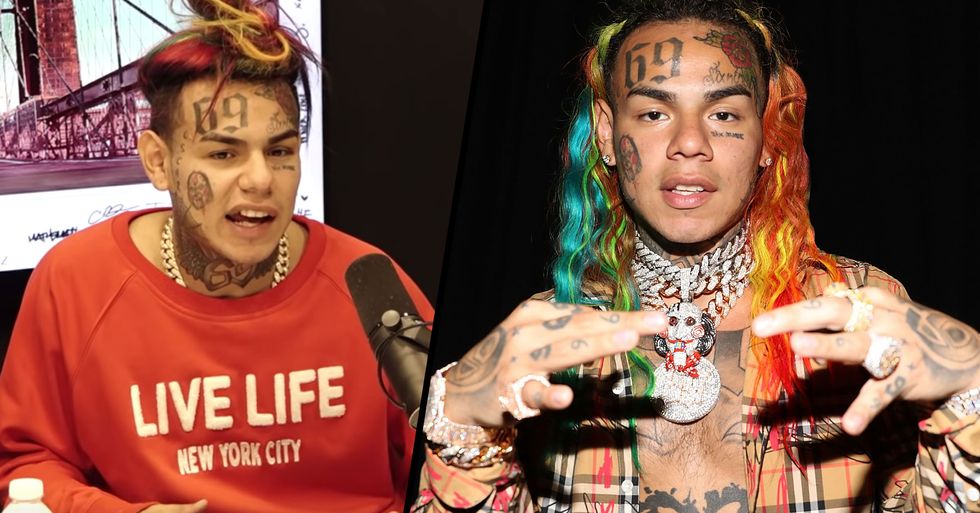 Just days after his premature release from jail, notorious rapper and gang member, Tekashi 6ix9ine, has been making some rather cheeky comments on social media.

Keep scrolling for the full story, and to hear what he said regarding the government's plea for pandemic snitches...

But, out of nowhere, the rapper was suddenly released from prison just last week.

The star has been released.

The convicted felon is now serving his sentence from the comfort of his own home.

And, since his release, he has been incredibly active on social media, with him today posting a smiling photograph of himself with the caption, "FINALLY FREEEEE" with a crying emoji, a love heart, and a prayer symbol.

And he has wasted no time in poking fun at his situation.

The rapper left a cheeky comment on an Instagram post about Los Angeles Mayor, Eric Garcetti, offering rewards for those who ‘snitch’ on businesses breaking the city’s strict stay-at-home order.

Last week, Garcetti came down hard on businesses not abiding by the stay-at-home orders currently in place...

And he encouraged members of the public to report these businesses to officials, saying: "You know the old expression about snitches. Well, in this case, snitches get rewards."

Well, he was just asking for the world's most famous snitch to get involved, wasn't he?

And Tekashi wasted no time in replying to his rather unconventional remark.

"Coming to the rescue."

Making reference to his own turbulent history with snitching, the rapper's comment came with the most perfect and hilarious timing.

His remark was left on the popular Instagram news page, The Shade Room...

Who instantly shared a screenshot of the interaction with the caption: "A comment made by #Tekashi69’s account was left in #TheShadeRoom just days after he was released from prison."

"Y’all can’t lie, the man funny as hell" one user wrote, while another commented, "Damn he quick lmfao."

Others were a little concerned by the positive response to his remark and reminded people that he is indeed a convicted felon who has done an awful lot of bad things. "The unfortunate thing is. His humor gonna [sic] win the hearts over. And snitching will be accepted nationwide."

Though in this instance, snitching may be okay.

If you see any businesses going against the lockdown regulations, snitch away to your heart's content... Even you, Tekashi. For more on the criminal world, keep scrolling to read about the gang member who escaped jail in the most peculiar disguise...