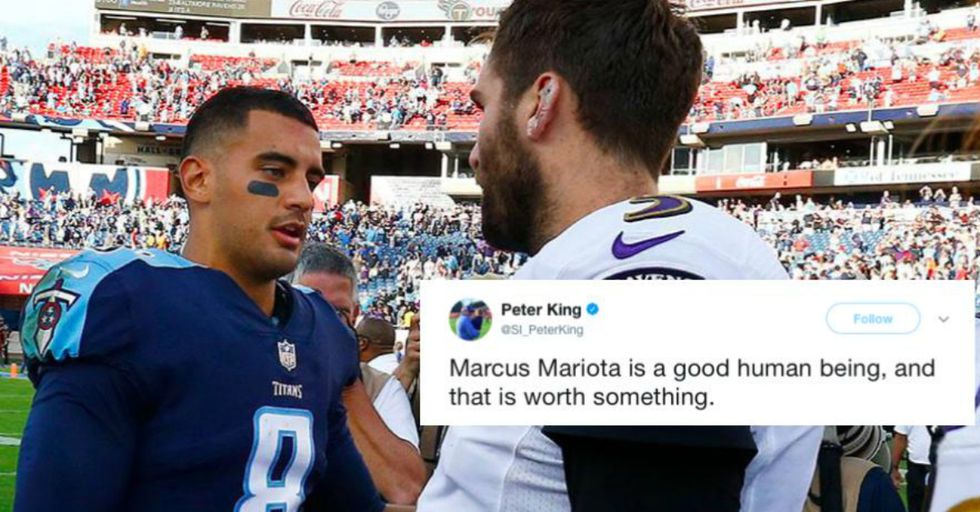 Tennessee Titans' quarterback Marcus Mariota has had somewhat of an up-and-down year, according to Sam Cooper of Yahoo Sports.

According to Cooper, Mariota has been with Tennessee for three seasons, and was selected No. 2 overall in 2015. We're assuming that this has something to do with the draft, but we're not sure, so we're just going to say it's the draft and keep moving.
In any event, Cooper says:

Mariota has had a career-high 14 interceptions and just 10 touchdown passes on the year. Eight of those interceptions have come in his last four games, which is not great timing as the 8-5 Titans are battling with the Jacksonville Jaguars (9-4) for the AFC South crown.

This apparently amounts to an up-and-down performance. After the Titans were served a "12-7 loss to the Arizona Cardinals, with Mariota completing 16 of 31 passes for just 159 yards and two interceptions," (a bad game only exacerbated by his sprained knee), he was understandably in a bit of a funk during his post-game news conference.

When asked by a reporter, "You seem more downtrodden than I've seen you after some losses over your career, why does this one kind of hurt more? Or am I just reading into it?" Mariota had a quick response.
"No, I'm just pissed off, that's all," Mariota said. "We just lost." Now, we've never met Mariota before, nor do we know how he normally acts, but for us, this did not seem like a very sassy answer. It just seemed like a (somewhat) polite young man who was disappointed in his team's performance.

One person, however, did not feel the same. Mariota's mother was apparently watching the news conference, and she was not pleased with what she saw. She picked up the phone and gave him a thorough talking to.
Whatever she said must have had Mariota's ears ringing because the penitent player swiftly took to the cameras to apologize making a statement during his media availability on Wednesday to the beat reporters on the scene.

Watch @Titans QB Marcus Mariota apologize to the media for being short with us after the game on Sunday #titanon2… https://t.co/w92B6WCSGj
— Cal Baxter (@Cal Baxter)1513214215.0

"Real quick, I want to say I am sorry for the way handled the press conference," Mariota said. "I know not everybody that was there is here. But I was rude and inappropriate, and I just want to say I apologize for it."
Mariota also explained that his mother was responsible for the prompt apology. "It’s funny, because I got an earful from my mom," he said. "That’s how I was raised and I appreciate you guys for understanding." Aww...
We have to say, in these days of constant news of concussions and presidents engaging in Twitter wars with athletes, it's heartening to see that there are some players who remain humble with their feet firmly on the ground. Here's to Mariota and his mom. We're not football fans, but if we were, we'd start watching the Tennessee Titans just for this.