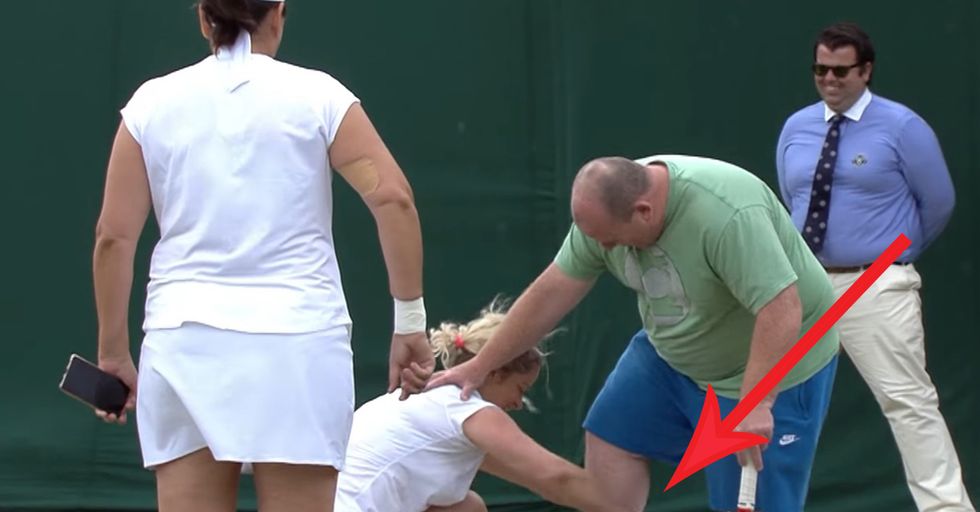 Wimbledon is a tournament known for its prestige, where serious athletes seriously compete for a serious title. But every once in a while, something hilarious (and amazing) happens.

During a friendly doubles match at Wimbledon on Friday, things got a bit off the rails when a spectator shouted for Kim Clijsters, former world number one, to do a “body serve."

So she challenged the backseat coach to pick up a racket and face the serve himself.

The spectator, Chris Quinn, was more than game, taking to the court with the ladies to prove he could handle the world’s best.

"Kim had said to the audience, 'will I serve left or right?' and I said 'body serve', and the next thing you know, she responded to my shout-out by saying, 'do you think you can handle my serve?'" He told the BBC.

This highly unregulated ladies doubles match now included a man from the audience. But there was one rule Clijsters clearly wasn’t willing to break.

The sacred rule of tennis fashion.

Noticing he wasn’t wearing the regulation all-white outfit, Clijsters went back to her kit and found him an extra skort. (A skort is a skirt with shorts conveniently built-in.)

Quinn wasn’t the least bit intimidated by the last minute costume change though. "I wasn't leaving the court until I got to play against Kim Clijsters so did I pull them up? Absolutely and I'd do it again."

He managed to wriggle into the athlete’s gear shockingly quickly, a sight that sent the entire stadium into a fit of laughter.

Even Clijsters was rolling on the ground laughing! With everyone in regulation gear, the game (unofficially) proceeded. How'd he do?

As captain of his local tennis club, Quinn was able to pull off a respectable first try at returning Clijsters' serve.

But in the end, it was clear who the professional was. And though he lost the point, the match stayed friendly even after the stands had cleared.

Quinn reached out to her on Twitter after the game to thank her for the experience.

And he even received a friendly response from the woman his daughters idolize.

The whole thing was quite a spectacle, but Quinn was excited and ready to do anything.

"Before she was about to serve to me, she runs over to her bag, pulls out what I thought was a pair of shorts, but as she got closer I realised it was a skort," he laughed.

She even let him keep the skort, probably realizing it would never be the same after what Quinn put it through...

Besides, he has some big plans for his new little piece of sports history.

While Quinn was happy for the souvenir, he’s doing what any savvy sports fan would, and is auctioning off the one-of-a-kind item online.

But he doesn’t plan to keep the proceeds. In fact, he's doing something quite noble with the money.

Instead of keeping the profits, Quinn decided to donate them to charity.

The Gavin Glynn Foundation is a local Irish charity dedicated to helping families of children with cancer afford the travel necessary to get the care they need.

People applauded Quinn for being such a good sport about it all, and then ending it with a good cause.

We could all stand to be a little bit more like Chris Quinn.

Besides, as this mouthy spectator puts it, the memories of his Wimbeldon debut are more than enough.

"Life is too short to not say 'yes' to things like that."

"It's not every day you can say you've shared headlines with Roger Federer on the Wimbledon page, that's one off my bucket list."

You have to appreciate a man with such weirdly specific bucket list items.

And I wish him luck on what I can only assume comes next: