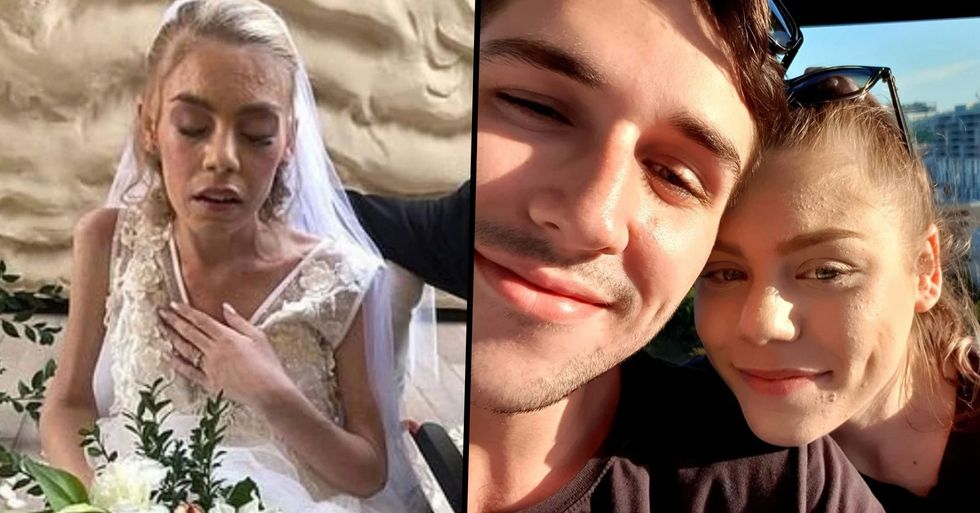 Sadly, after putting up a courageous fight, a terminally ill bride lost her battle with cancer, just days after getting married.

Her husband has given an emotional tribute to his "best friend..."

Ashleigh Simrajh first became aware of a "bump" on her leg last year.

Concerned, the twenty-three-year-old, from Queensland, Australia, went to the doctors where she was dismissed and told it was merely a harmless "wart."

However, one year later...

Ashleigh was given the tragic news that the "wart" was infact a melanoma that had spread around her body.

Because, as you will all know, cancer is by far one of the most devastating illnesses a person can have.

Cancer is the result of the uncontrolled growth of abnormal cells in the body...

And develops when the body's normal control mechanism stops working. Instead of old cells dying like they're supposed to, they instead mutate, forming new, abnormal cells.

The treatment is grueling.

So, of course, whenever someone is diagnosed with the disease...

It is so important for them to live their life to the fullest.

Now, Ashleigh was due to wed her love of her life, Jason Hale...

So, when she was told that she had mere days left to live last month, she knew that the ceremony had to be moved forward.

She decided to host the special moment at her favorite place, SeaWorld...

So she could be surrounded by animals as she and Jason exchanged their vows.

It was an incredibly emotional day.

Fifty of her closest friends and family members attended the ceremony and watched as Ashleigh finally married the love of her life.

However, her family still needs answers.

Despite Ashleigh having a magical wedding, the fact remains that her doctors and medical professionals failed her, and her life is to be cut drastically short as a result.

"She now has lung cancer, liver cancer, cancer in her chest, and only days to live," he told the MailOnline.

He believes that his daughter's life could have been saved if she had been diagnosed correctly...

"She believed them and continued her life as if nothing was wrong. If it had been diagnosed when she first went to see them she wouldn't be where she is now."

The family has since set up a GoFundMe page...

In a bid to raise money in order to make the closing stages of Ashleigh's life as enjoyable as possible, though she is now having to stay at home with a dedicated nurse. The description reads: "We are going to make her last few weeks the best with a marriage and anything else that will make her happy. Ashleigh has only has a few weeks they tell us left [sic] so we are trying to make it the best we can for her and make sure she gets the wedding that every girl dreams of."

"She is just an amazing young lady who deserved better than what she has to face."

The fundraiser has since raised over $18,000 - you can visit the page here. We wish Ashleigh and her family all the best.

Just days after the wedding, Ashleigh was taken to hospital, only to return home to live out her final days surrounded by family...

"She is comfortable and pain-free, slept the entire night, she sleeps sitting up surrounded by pillows as she can’t lay down due to the fluid around her lungs," her father wrote on the GoFundMe page on Saturday.

"This young lady is a fighter she is fighting so hard," he continued.

"Ashleigh's message regarding melanoma and incompetent doctors has literally reached millions of people and she has definitely saved lives which is what she is trying to do."

Sadly, not long after, Ashleigh lost her battle...

Tributes came flowing in for Ashleigh and her family, with people showing support for her husband, Jason Hale.

Jason confirmed the devastating news in a heartbreaking tribute on Tuesday morning...

He described her as "the most beautiful woman I could've ever imagined being with."

"'Words cannot describe the pain I'm feeling right now, I'm absolutely devastated and my heart is completely shattered," Mr Hale wrote. "You were so brave and strong and I know that you tried your absolute best fighting this battle, you couldn't have tried any harder than you did. I'm so proud of you babe."

He thanked Ashleigh for every moment they've been able to spend together...

"Thank you for loving me so much and making me feel like I was on top of the world, It's what any man hopes for and dreams of. "From very early on you had a special place in my heart and that special place will always be there for you and only you. "We had so much planned out! We pictured having kids traveling the world and most importantly growing old together! "We would've done so much more than that too, as any loving couple does."

"I think growing old with you was something I wanted to do the most. Not much else mattered to me than to just be there with you for my whole life. "Knowing that these things won't ever happen rips me apart inside. I'll never stop thinking about them."

He ended the emotional post with him hoping they would find each other once again "very soon."

"I really don't know what I'm going to do without you now. I'm so lost and feel completely empty inside. It doesn't even feel real to me that you're gone, it just feels like I'm in this horrible dream which I can't escape," Mr Hale wrote. "I needed you in my life. You were my best friend" "I don't know whereabouts you are now, but I hope I can find you again very soon." "For now my precious angel, fly high."

"PLEASE keep sharing her story and saving lives all Ash wants is no one else to have to go through what she has gone through," Ashleigh's father wrote.

Our hearts go out to Ashleigh's family and friends.