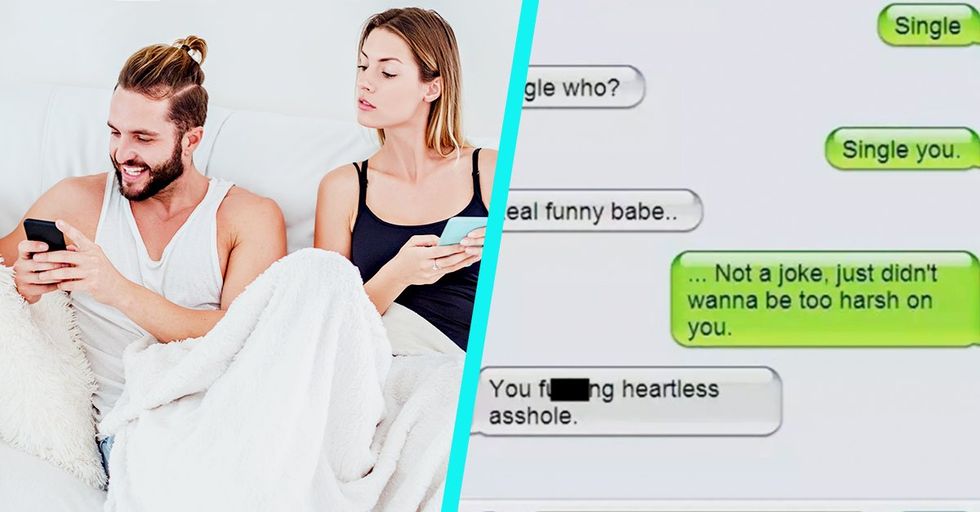 60 Insane Breakup Texts You Need to Read to Believe

Breakups are rarely easy, but a few are downright ridiculous. Breaking up via text message is generally considered a faux-pas if you’re trying to be considerate about the breakup, but that didn’t stop these people. From brutally honest texts to misunderstandings of disastrous proportions, these text messages highlight the full awkward (and often hurtful) potential of breaking up over Messenger.

Here are some of the worst conceivable breakup situations, all conducted over text messages.

This guy accidentally said exactly what his then-girlfriend wanted to hear. Would this be good or bad autocorrect?

Let’s be real here…that is PRETTY MUCH why break-ups happen.

At least they can both still agree on one thing...

This person made their relationship...disappear!

And then there are times when magic tricks don't quite work the way they're supposed to.

This person devolved from regular texts to nothing but emojis.

You know what they say about pictures being worth a thousand words. Or, in this case, they're worth roughly one sentence.

This one is for Batman fans.

This person copied a breakup speech from Batman, almost word for word. Well, at least it's articulate.
Humor is often used as a tool for deflection…or, perhaps, ending relationships?

Self-esteem is a beautiful thing.

Break-ups may be tough, but maintaining self-love can go a long way towards easing the pain.

Why would someone ask this?

This one isn't even a romantic breakup, just a super awkward parting of the ways.

It's never fun when everyone else knows about something major before you do.
There's nothing like a hilarious autocorrect error to soften the blow of your breakup text.

This person went about their breakup in all the wrong ways.

Maybe don’t ask for your soon-to-be ex’s help in breaking up with them.
Brutal honesty might not always be the best policy.
Rude AND Grammatically incorrect.
A legitimate disagreement.
Sugar-coating a situation won’t always work in your favor.

All in all, it's a pretty terrible way to find out your husband is cheating.

This person's ex wasn't quite getting the message.

Sometimes the message doesn’t always sink in right away.
This person tried to make a few pop culture references in their breakup…with mixed results.

And now for the ultimate breakup… between middle schoolers.

This epic breakup was shared over Twitter, and we've got to hand it to the young lady: she definitely won this round.

This text-breakup came in the form of an ultimatum:

As long as the Xbox is okay...

Someone had their priorities in order (same, though).

Not technically a breakup (probably); this text exchange is just smooth.

Huh, never heard of this town before…

We're guessing this wasn't the acronym and phrase they were expecting.

Sure, definitely the hair.

This text is a really elaborate attempt to disguise something insulting as something courteous.

The entitlement is physically painful with this guy.

Those texts officially have too many individual letters removed or substituted to be considered proper 'words.'

Worst case of mistaken identity, ever.

Through disappointment, two friends found each other.

This is the start of a beautiful friendship!

May they rest in peace.

Now THAT is a rough way to hear about impending divorce.

Well, maintaining your health is of the utmost importance...

Blunt, yet clever enough that you can't help but chuckle.

This person is extremely unwilling to admit defeat.

Wow, to give someone false hope and then snatch it away...that's cold.

The evidence is overwheming. People, don't leave your significant others in Walmart.

This isn't a text, per se, just funny.

At least you could say that sending your ex a hot pizza pie is better than giving some "cold comfort" instead!

But really? You're gonna save the breakup for a text prompting you to "make a wish"? Yikes.

This is why they always say that honesty is the better policy, Andy!

This is a really weird thing to send your ex.

Okay, I can't say that I know ANYONE who tries to get romantic attention by sending Sims screenshots.

Some people just can't resist slipping back into the DMs to give their exes a hard time.

This is hardly poetic.

Having the person you're about to break up with type out part of the rhyme just seems unnecessarily rude!

You feel like breaking up with someone and all of a sudden you're a comedian? Nah.

Texting your ex to remind them how much you don't like them? Huh, what's the opposite of 'romantic'?

Sometimes you learn more than you meant to.

Everything is out in the open, now...even if it happened in a pretty unpleasant way.

Congrats on the engagement!

Honestly, though...that's a pretty great gift to get from an annoying ex.

That's definitely a creative way to tell someone to back off!

Don't get your exes mixed up!

...The relationship can't have been that memorable if they're accidentally texting someone else they dated instead!

Again, what makes people think that breaking up with a joke is smart?

But also, please tell me this breakup was between two bodybuilders or something, and that joke was totally tailored to their mutual interests.

Don't be rude to the cat.

"Your swearing is very unladylike"? Okay, that's just asking to be cursed out by your now-ex girlfriend.

When you just can't forget your ex...in a bad way.

But hey, while you're there, may as well as for help, right?

...Well, hopefully, it was received. Otherwise, someone's getting set on fire!

Still plenty of awkward, though! Brand new in school and already rubbing people the wrong way.

And either a very awkward exchange followed...or nothing at all!

Could you just break up with someone normally? Sure. But could you compose a biting poem about their infidelity? Also yes.