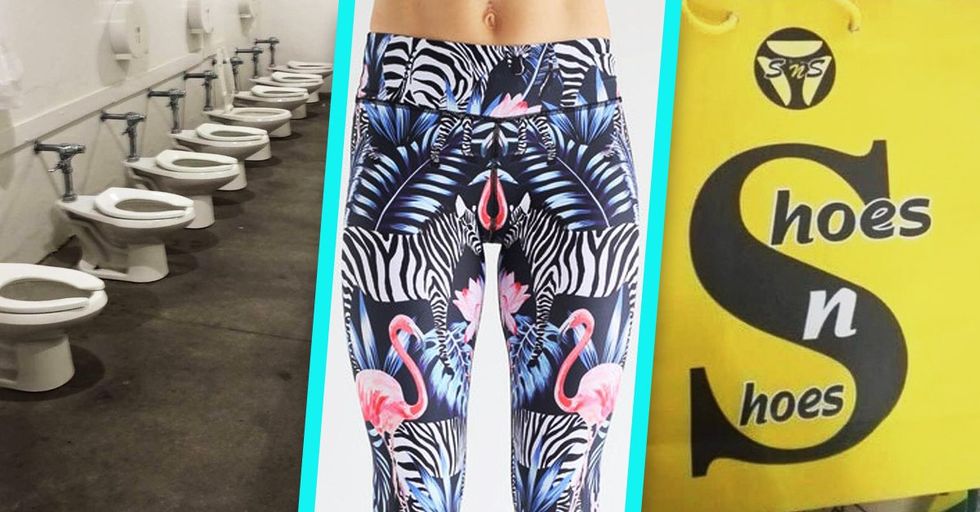 30 Terrible Design Decisions That Will Make You Hilariously Uncomfortable

Design should be unnoticeable. It's supposed to be simple and unobtrusive, to showcase a product without advertising its packaging. What it's not supposed to do is embarrass – or even worse – offend.

These 30 design fails obviously didn't get the memo.

Westminister bridge is a London icon. First built in 1750, it stands over the Thames River and links Lambeth on the east side and Westminster on the West. It's basically a London institution.
So please explain why the little decorative accents inside it look like penises? Sure, you could say they look like clovers, or those little card symbols, but nope – once the sun hits, you definitely get a glimpse of Westminster in all its penile glory.

Everyone loves flamingos. They're pink, they can stand on one leg, and they make the best lawn ornaments.
These flamingoes are ornamental, but someone put them in the wrong place. The wrongest place ever. Solid nope.

Have you ever wanted to relieve yourself in full view of – oh, around ten other people? Boy, have we got a bathroom for you.
It's slick, it's modern, it has no doors... or walls... or pretty much anything in the way of creating privacy. You're welcome.

Have you ever heard of silhouette dresses? They have a pretty basic concept, they're supposed to make you look thinner by having dark panels on the sides and light panels in the middle.
This silhouette dress failed so hard it should have never been allowed out of the design floor. Good god, there are children on the streets!

Usually, clothing companies want their models to have long legs. They often do a little creative stretching in photoshop, and for the most part, we're with it.
This god-forsaken abomination, however, is definitely not something we endorse. How many people did it take to greenlight this? The horror. The horror...

The message was simple - Shoes n Shoes. Can't get something that simple wrong, right?
As it turns out, you certainly can, which is why we got left with a very confusing message... Next time, don't try to get fancy.

Don't you just love it when a company advertises something, but then does the exact different thing?
This company purports to sell sliding doors, so why are their doors stationary? Honest question.

9. Just begging for a smart-aleck answer

You ever see design that just dares people to do stupid things? Like this quiz – clearly, it's set up to prompt a specific type of answer.
Honestly, the kid got it right. Next time, set up the quiz differently.

11. The exact opposite of what it says

This product claims that you don't have to take your hands off the wheel, so why is the man in the picture doing exactly that?
Maybe, when advertising something, make sure the person in the ad is not doing the exact opposite of what the ad is claiming. Just a thought.

12. When you don't think through your company name

Do you know what a shart is? It's basically when you poop lightly while farting.
We get that the company's name is S Hart Construction, but maybe they should have talked to their design person about how they wanted it displayed. You know, before he or she came up with a sharty design.

Salt shakers are a basic necessity. They're everywhere, and they're supposed to be unobtrusive.
This is the exact opposite of unobtrusive. In fact, this is what we call suggestive. This right here is a smooth nope.

Have you ever wanted to slide out the big blue back-end of an ambiguously Simpson-like figure?
Well, have you? You're welcome...

Landline phones may be on the fast fade to obsoletion now, but basically everyone who's ever seen one knows they don't have a texting function.
So why in the name of creation would you use them as a header image for an article about why he's NOT texting you?! It's pretty obvious why – the damn phone can't text!

Remember the song, "Don't worry, be happy?" It basically became a huge anthem back in the day.
People have placed the lyrics all over t-shirts, placards, license plates, and now, this button. The designers of this button, however, seem to be confused about the lyrics. "Don't be happy – worry," is definitely not how the song goes.

Boy, that spidey suit – it sure is the very essence of modesty. Modesty incarnate, in fact. Why?
Because we certainly didn't know it kept Spiderman's spidey bits from hanging out like this. The more you know...

We've all heard those stories of people finding tiny cameras in public bathrooms. Every year it seems voyeurs find more and more advanced ways to spy on people.
This public restroom, however, does the job for them. No more peeking under stalls, or trying to install cameras when no one's around. All you have to do is look around, and you'll see everything you ever wanted to see.

After using the bathroom, getting toilet paper should be simple. All you should have to do is reach a little bit.
In this bathroom, you have to combine the flexibility of Elastigirl with the brainpower of Megamind just to figure out where the toilet paper is and how to reach it.

Flower print dresses should be light, airy. They definitely shouldn't make you look like you had a very unfortunate accident in the bathroom.
This flower print dress obviously did not get the memo. It looks like diarrhea exploded all over it, a definite no.

We all know the story of Noah's ark. In preparation for the flood, Noah sent animals into the ark, two by two, so they could repopulate the world later.
We all also know that male lions have manes. How are these lions going to repopulate the world? How???

In the past few years, numerous scandals have erupted relating to the sexual assault and molestation of young boys in Catholic schools and churches. In fact, when people think Catholic school boy nowadays, the first thing that comes to mind is said scandals.
So why in the name of everything that's holy would anyone put the door handle of the Catholic school bus in that exact spot? Just why?

Hard hats are supposed to protect you, right? They're supposed to get you in the mindset of being safe and prepared on a work sit.
That being said, we have a couple of questions. 1. Why is a child on a work site? 2. Why is he hammering a nail? 3. Who thought this was a good idea?

And no picture epitomizes this sentiment more than this. Look closely, notice anything strange?
If you said door-handle boobs, you would be correct. We'll say this again – placement is important.

Disney is supposed to be reassuring. Disney nightlights, particularly, are supposed to help kids sleep at night.
Does this look reassuring to you? Well does it?

27. Someone did not think things through

When printing words on a shirt, particularly glossy ones, it's best to monitor how they show up in different kinds of light.
This shirt has two different messages – the intended one, and the one that'll get you awkward stares all up and down the street.

When creating packaging with children on it, it's always best to consider it multiple times from multiple angles to prevent such horrifically awkward problems as this.
This is just uncomfortable. Who did this?

What does this look like? Think about it really hard.
Now erase it from your mind. No one needs this image in their head. No one.

30. Contributing to the delinquency of a minor

This ad is supposed to be showing that wine glasses are unbreakable – even in the slipperiest of hands. This ad failed.
This ad failed so badly, we're pretty sure it's depicting what amounts to a misdemeanor, which is what serving alcohol to a child is. Do better, people, do better...