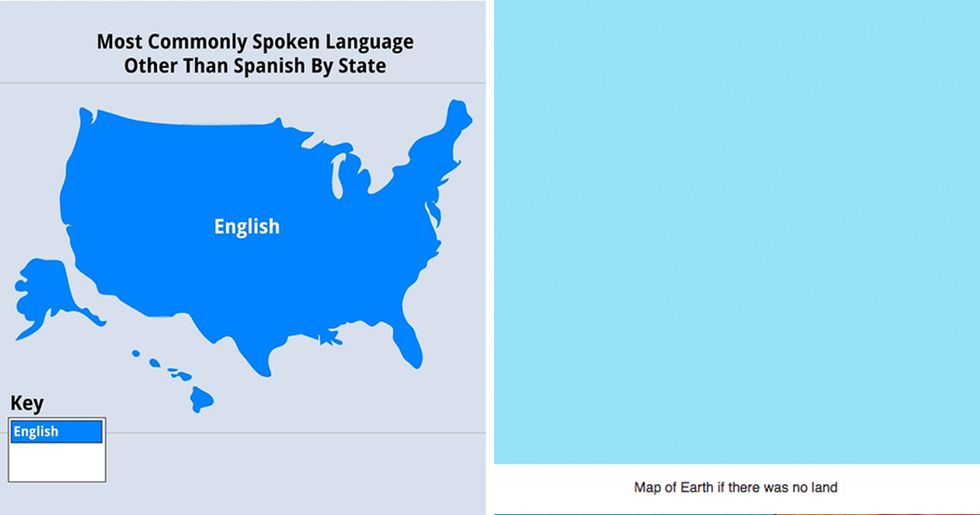 Terrible Maps That Will Make You See the World Differently

Maps are very important. They tell us where things are. Sometimes they tell us elevations, country borders, and other useful things. I would even venture to say that the maps' main purpose is to be useful. To be guides for those who need them. Even though physical maps aren't as ubiquitous as they once were, people still use maps every single day (even if the word "maps" is preceded by "Apple" or "Google").

There is no denying the importance of maps. So, it is hilarious and weird and unnerving when you see a map that serves no purpose at all. That is what this list is. A bunch of useless maps. Some of them are funny. Some of them are absurd. Some of them do offer information, except that information is entirely useless. These maps are all different; the only thing they have in common is that they are super funny.

The map from Dora the Explorer is one of the most famous maps.

In this GIF, he appears to be going through some sort of existential crisis. Probably because maps like the following ones exist.

Most common language in U.S.

I suppose this is a useful map for people who don't know what language most people in the U.S. speak, i.e. newborn babies and cats.

This is exactly what the United States would look like if all the states were in different places. I told you they'd be useless.

I bet you didn't know how many Switzerland puzzle pieces fit into Brazil before right now. You're welcome.

Map of the Earth if there was no land

Well, yup. That about sums it up.

OK, so this is really fun. There are a lot of good ones, but Pee Pee Township might take the cake.

Electricity consumption in Europe in 1507

Get it? Because there was no electricity in 1507.

Pubs in the UK

This is insane– in a good way.

Map of the U.S. if every state was out of proportion

This is possibly the most useless map on the list. That's why it's my favorite.

Most popular words in dating profiles

Less than 0.1% of the world population lives in the blue area

I want to know about that 0.09 percent of people who do live in the middle of the ocean. What's their secret?

This is a pretty accurate map. There aren't very many popes in the world.

This is probably the most useful map on the list. You have to go to New York for real pizza.

Most-Used Word in Each State

Read the words. It pretty much disproves all those "most-used words" maps. Maybe this is a useful map.

Well, "per capita" means per person, so there really is one person per person in Europe. And, I guess, everywhere.

The world is a cat

Poor Australia. It's the plaything of a giant cat.

Hey, we don't know what's out there. Don't rule out the existence of space bears.

Space without the space

Speaking of space, this might be what it would look like if there was no space. There is no reason for this to exist, but now it does.

I suppose this is useful because it does highlight French-speaking countries. The inclusion of Kim Kardashian's crying face is just a bonus.

The U.S.A. according to British people

I love maps like these because they tend to be amongst the most accurate maps out there. It's all true.

They don't know my life. This map could be very useful to me. I could be writing a dissertation about the location of Australian sheep in 1920. I'm not, but I could be.

So, I don't know if you were aware of this, but there are a lot of churches in Poland. Like, a lot of them.

Map of the Earth if it was a bear

I don't know why this map was made, but I endorse its existence. I love bears!

All sides are north. Everything is north. When you're the southernmost tip of the Earth, every direction is north.

This is strange, but I feel like it's totally accurate. It was a garbage can my whole life when I grew up in New York, but now that I'm in Southern California I hear "trash can" so much more.

Killer whales are everywhere! Except for the lakes and rivers, which is a good thing.

Most common answers about what state people are in

This makes sense. When you ask most people in Kansas what state they're in, they'll say Kansas. Share this with a fellow map enthusiast!