Restaurant Patrons So Awful, We Can't Believe They Exist in Real Life | 22 Words 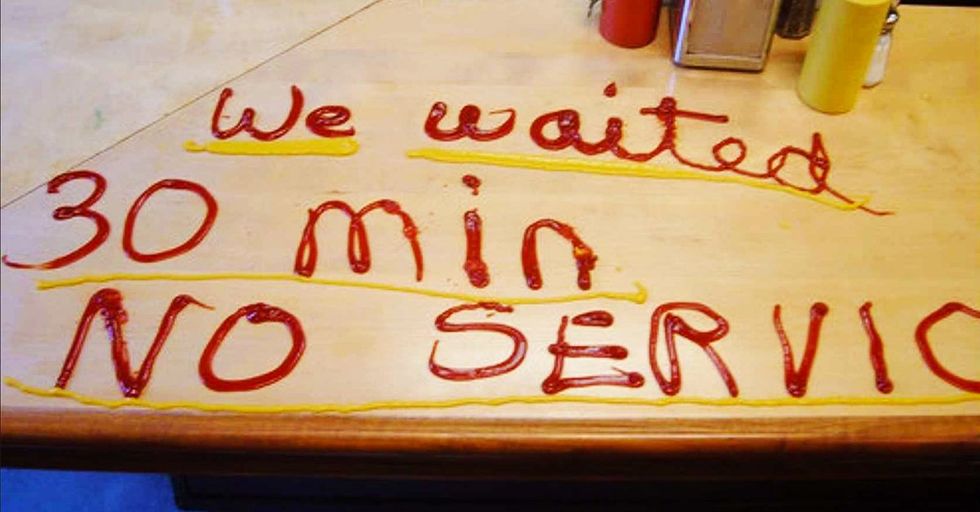 Restaurant Patrons So Awful, We Can't Believe They Exist in Real Life

Anyone who has been part of the service industry knows that it can be grueling. Sure, there are (thankfully) always kind people in the world, but a difficult one can ruin your day faster than a blink.

The golden rule would have us all treating others as we’d like to be treated, but these people definitely didn’t get the message.

28 separate checks later… -@slparker2493 Sometimes you and your friends need a check split, but please never split it this much. We have money-sharing apps!

This is like ‘waiter, there’s a fly in my soup,’ except more annoying.

I had a table come in the other day pull the "hair in my food" bit. Problem was the hair was blonde and none of the workers (including me) had blonde hair. His girlfriend (who was with him) had blonde hair, though. My manager and I both knew what they were pulling. But of course, you can't accuse a customer of planting evidence. -angel-acid

This story takes the rowdy bachelorette stereotype to new lows.

I worked in a cafe when I was younger (17/18) and usually did weekends to supplement my income while doing my apprenticeship. One Sunday I'm cleaning up and straightening things when they show up. A hen party of middle-aged women clearly suffering the morning after the night before. In the beginning, I was happy since I now had a table to look after and keep myself busy with but as it went on it went downhill and I wanted them gone. Apart from trying to order things not on the menu they also:

This isn’t how paying a check works!

I have never seen this in my entire life. -@SarahNicoleStub

Not actually “terrible," just a really weird way to leave a tip:

Behold the money-cocktail. On the next page, one food service worker's Twitter uncovered the most dastardly of bandits.

Do some people just really want to see their servers sweep?

This is how you place an order.

The customer’s special dressing request is somehow too descriptive and yet couple probably use a little more clarification.

You’ve been struck by a smooth criminal.

Well, they say the customer is always right.

Birthday watermelon! Why haven’t we all thought of this before?

But not this criticism, because it isn't actually constructive at all. Next up, take a look at some of the most frustrating ways to leave a tip that you could imagine.

And by actually tipping, we don’t mean this:

If you’ve ever wondered how petty people can be, look no further.

There are definitely better ways to lodge a complaint.

Although you *can* speak to the manager, you probably shouldn’t unless the request makes sense.

Last night at 9 pm a guy walks in and asks can you seat my party of 11 at 11 pm. We close at 10 pm. I tell him "absolutely not due to us closing at 10." He asks for the manager. I get the manager and go help catch dishes cause I'm laughing so hard. -u/samantha5464

There’s picky, and then there are these people.

Why even go out, though??? -server_life What's the worst instance of a dine-and-dash you've ever heard of? We think we've one that food service workers everywhere will recognize.

Yeah, that’s not really a good enough reason to dine and dash, but go off I guess.

Leaving a table looking like this is enough to make a server cry.

What were they doing to the spaghetti?!

This person tried holding tips hostage to change the menu.

Because if there’s any way to force Ruby Tuesday into restoring creamed cauliflower to their menu, it’s by holding out on one lone server. Solid reasoning!

How to soften the blow on a bad tip:

Is it almost worse that they’re being coy about it?

What sort of compensation is appropriate for face-punches?

Sure, let’s go with a 68% tip. That should cover the damages! Coming up, one customer's love life gets hilariously overcomplicated, and another comes up with one of the most random 'tips' you can imagine.

When a customer drags you into their tumultuous love-life, chaos ensues.

Good service is the goal, but some things can only be achieved with a miracle.

“MAKE HIM REGRET BEING BORN" -this Pad Thai buyer, apparently.

It may have been the spiciest Pad Thai in existence.

In this one, the customer isn’t even being rude to the servers.

Most people would agree it’s better to let those other people eat in peace.

Funny catchphrase, wasted on this…

Seriously, I want to laugh, but not while someone is being a jerk to their server.

This is a strange attempt at rising to fame.

Tipping someone your mixtape seems pretty ineffective going both ways here. The server would probably prefer an actual monetary tip, and the mixtape’s owner would be better off submitting it to a record label. Oh, well! Think those are bad? Check out these restaurants that refuse to use plates!