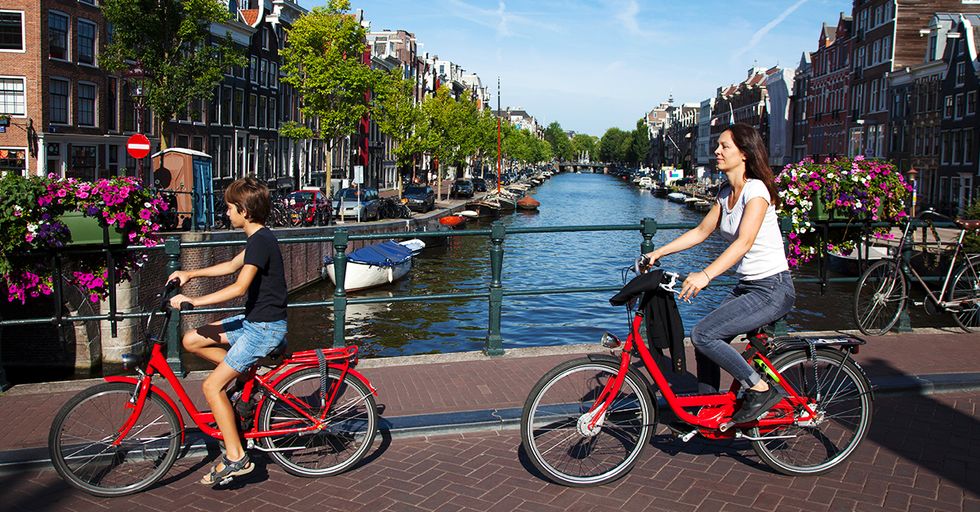 We've all traveled somewhere, even if it's just a different city in the U.S., and made an embarrassing tourist mistake.

But we've also seen tourists come to our cities and stick out like a sore thumb.

Whether you are the local or you are the traveler, we all know some serious tourist faux pas that 'cause you to stick out like a sore thumb.

Trust us, you are going to want to read these to save yourself some serious embarrassment.

Madrid redefines "late lunch". The normal lunch time in Spain is usually around 2 or 3 pm. It's best to follow the crowds and enjoy lunch when everyone else does, even if it feels a little later than usual.

No Haggling in Tehran, Iran

Supermarkets in Tehran are so used to people bargaining prices that they have raised the overall cost to stop the haggling. Grab your goodies and get going. No use in haggling, you'll probably end up paying more.

No Camouflage in Cairo, Egypt

I think camouflage should be banned everywhere. But locals in Cairo see camouflage as you not blending in, but basically a big red flag that you are a tourist. Don't wear it while traveling, it will make you stand out more than blend in.

Helmets Are A No-No in Amsterdam, Netherlands

I am all for safety but apparently, safety shows weakness in Amsterdam and it means you aren't a local. Tourists stick out if they wear helmets while traveling around the beautiful city that is known for being bicycle friendly.

Being Super White in Rome, Italy

I mean there's really no way to change this but, if you have white skin and fair hair, Italians will know you are a tourist. One local said, "We often understand they’re tourists by their pale glow."

Being Super Tan in Seattle, Washington

Quite the opposite of Rome, if you show up in Seattle with a sweet tan, people will know you do not come from the rainy city. You might get a lot of compliments about your radiant skin but you will also get the question, "You aren't from around here, are you?"

Flip-flops are not a thing in the land down under. The proper term is "thongs" which makes me cringe a little. But I don't want to embarrass myself in front of the Aussies so I guess I will be saying thongs.

If you're a local in Boston, you have zero time to watch that magician on the street. Tourists usually aren't in a rush so they can toss a few coins at the breakdancing Spider-Man. Everybody else is trying to cram onto the subway and get to where they are going.

Being Nice in Johannesburg, South Africa

It's not that locals aren't nice, they just aren't chatty nice, if you know what I mean. One local said, "Not only do we not have the patience for it, but we’re also wary of the safety risk of stopping to talk to some random person on the street." Basically, keep the chitchat to a minimum.

Feeding the Squirrels in Alberta, Canada

Canadians respect their wildlife and know that feeding them is more harmful than helpful. If they see you handing out nuts to the squirrels or popcorns to the birds, you'll officially label yourself as a tourist.

Locals, apparently, wouldn't be caught dead hanging out in one of the busiest parts of the city, I wonder why? Tourists, meanwhile, will spend a good chunk of their time snapping photos in the iconic Times Square.

A full English breakfast is also known as a fry-up and if you are caught with one, just know everyone can tell you aren't from here. It's a dead give away. Order some tea and a bagel or something. Keep it classy.

Wearing a Suit as Business Attire in San Francisco

Apparently suits are so not a thing in San Francisco. If you wear one to an interview people will know you're an outsider. Most men wear business casual clothes.

Pronouncing the "G" in Edinburgh, Scotland

Wow, am I glad I know this one now. I feel like this would be really embarrassing. Apparently it's pronounced like "Edinburra", according to the locals. I'll have to practice this one a couple times before I take my dream vacation to Scotland.

If you've got a shiny car, it usually means you're in New Hampshire on the weekends, just visiting your second home and are not planning on staying long.

Throwing Out Your Gum in Singapore

Gum is illegal in Singapore and citizens are known for following rules so if you're seen smacking some gum and throwing it on the ground, you might get some nasty looks.

Visiting Navy Pier in the Summer in Chicago, Illinois

Summers in Chicago are amazing, attracting visitors from all over. But if you find yourself at the Navy Pier in the sunny season, you'll be among many other tourists and all the locals might roll their eyes because they came to see it in the fall before it was crowded.

Whistling indoors is just a no-no. Russians believe whistling is like blowing your money away, so you will definitely get some strange looks because you're that tourist who is blowing all their cash in a foreign country.

Using an Umbrella in Portland, Oregon

All locals just accept the rain. Maybe they'll have a raincoat, but it's mostly their persistence and bravery that keeps them dry. They don't wait for the rain to let up, they just keep their heads down and get from place to place, with wet shoulders and sneakers.

Just don't do it. It sounds wrong, it makes the locals cringe and there's just no reason to.

Leaving a Large Tip in London

Everything might be better in London. Restaurant staff earn a reasonable wage, so large tips aren't normal or expected. Servers don't rely on tips as much as they do in the United States. A large tip will probably make for a happy server, but they will know you aren't from around here.

No matter how many beers you have or how drunk you are, you never waste a drop of that liquid gold in Dublin. If you walk around the bar and spill your drink, you will look like a fool. Handle your liquor folks, or the Irish will know you're a tourist.

Locals hate this and they really hate those tee shirts where Alan is carrying the baby. That joke about Caesar's Palace is also so old. Just let it die.

Respecting road signs and stoplights in Mexico City may seem like the appropriate thing to do, but it may make you stand out or get you ran over. One local said "you see confused tourists being pushed by the locals because we just can’t wait to cross even if the stoplight turned green 2 seconds after."

"The surest way to identify a visitor to the islands (our polite word for 'tourist') is their mispronunciation (or avoidance) of place names," says one local. With names like: Pāʻia, Honoapiʻilani Highway, Māʻalaea and Kāʻanapali, it's easy to see why visitors avoid any attempt at pronunciation. It is fun to try though.

With frigid weather and slippery sidewalks, if you're wearing anything other than snow boots, you aren't from around these woods. Nice shoes get ruined and won't keep your feet warm, Canadians know that. Strap up your boots and throw on your Canadian Goose parka to stay warm and blend in.

Bringing Up Fargo in Minneapolis, Minnesota

They get it; this is where Fargo was filmed. It was a long time ago. It's okay to let it go. Also, calling the city the Minneapolis-St. Paul area is a faux pas. Just call it what it is: the Twin Cities.

Pretending To Be Rocky in Philadelphia

The entrance to the Philadelphia Museum of Art has 72 steps and if you are caught running up them with your fists in the air, you have labeled yourself as a tourist. It is so tempting to channel your inner Sylvester Stallone and climb these steps with valor and speed, but no local in their right mind will waste their energy.

They are everywhere, people. Deer are like the pigeons of New York City; plentiful and always in your way. If you see someone sticking their head out of the car to snap a pic, they are definitely a tourist.

Biking on the Sidewalk in Toronto

Just don't do it! It's not safe for anyone and the locals will probably hate you.

Wearing Anything That Says "Paris" in Paris

This one is pretty obvious but also very common. Wearing those fake University hoodies in Paris is a dead giveaway, or anything with an Eiffel Tower on it is just a no-no. Save those cheesy shirts for your hometown.

Not Wearing a Helmet in Surabaya, Indonesia

In some places, not wearing a helmet is cool or may make you seem like a local. but not in Surabaya. Safety is very important and locals know it's not worth the risk to not wear a helmet.

They know, they know: Rio is a beach city. But if you are walking around in just a bikini or swim trunks, the locals will know you are trying to adhere to the beach vibes but it will actually make you stand out as a tourist.

Locals respect the laws and stay away from the sea lions. Tourists run up and try to get as close as they can and take pictures. Let the creatures be, they're just trying to get some sun like the rest of us.

It is common courtesy to take your shoes off when you enter someones' home in Bangkok. Wearing your shoes indoors is seen as unclean and out of the ordinary.

Getting Stuck Behind City Buses in Atlanta

The Marta buses in Atlanta are famous for making very frequent stops. Locals know to never trail behind them and if you get stuck behind one, they will drive on by, knowing that you're a sucker tourist who just got stuck behind a giant bus.

Going On a Shopping Spree in Hong Kong

Buying in bulk in Hong Kong will definitely make you stand out. Prices are usually cheaper and you can get good name brand items at their malls, but locals would never walk out of the malls with handfuls of shopping bags.

Driving in a Straight Line in Lebanon

Potholes are quite common on the streets of Lebanon, so many locals know to avoid them by switching lanes often. They kind of make up their own lanes and their own rules, so tourists, take caution and get ready for a pretty twisted road experience.

Eating in Public in Uganda

Eating in public, eating while standing or eating while walking on the streets is a giant red flag that you are a tourist. Most Ugandans sit in designated eating areas to enjoy their food, not try to eat it on the go. It's proper manners to eat while sitting in a common eating place.

If this didn't give you the travel bug in a weird way, I don't know what will. Now you have the knowledge to show up and act like a true local, wherever you go! Share this with your fellow travel lovers and pass on the wisdom.