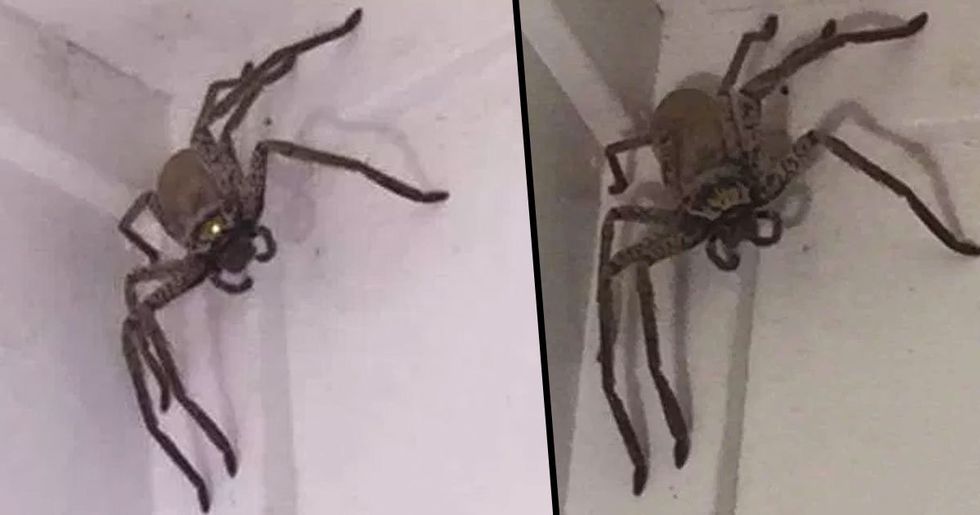 Of all the wonderful places on our amazing planet, there's nowhere more terrifying than Australia. Not because of the people (who we're sure are lovely) but because of the animal inhabitants. Honestly, whenever you hear about some terrifying creature from the animal kingdom, you can bet the story takes place in the land down under. And this latest story is no exception.

We've all been guilty of freaking out over a rogue bug in our home. A many-legged invader just feels intrusive and creepy, right. But Australia isn't a place to do things by halves - and when a spider creeps into their homes, you can bet it's not your average eight-legged joe.

One woman's Facebook post has gone viral after she begged for help upon discovering a gigantic Huntsman spider in her home. And, let's just say, this could be the biggest spider I've ever seen. Keep reading to see the critter, though be warned: It may make you never want to visit Australia.

Of all human phobias, fear of spiders must be up there with the most common.

While it's not quite known why so many people are afraid of the eight-legged creatures, arachnophobia is likely triggered by our instinctual memories of poisonous insects.

It's generally accepted that the fear is irrational.

Although there are spiders out there which are venomous, it's exceptionally rare for a human to be killed or even injured by a spider. The worst they normally do is give you a fright.

And there are even some out there that want to stand up for spiders.

Hey, they rarely do any harm - and without them, we'd be overrun with other insects. So maybe spiders are okay, after all?

Because there's one breed of spider which always seems to be making headlines for highly terrifying reasons - the huntsman.

There are a few reasons they're quite so scary.

The main one being their incredible size. Male huntsman spiders are able to reach between ten and twelve inches in diameter. Yikes.

And they have been known to eat creatures bigger than themselves...

Though their diet consists mainly of insects, huntsman have been known to snack on larger creatures, such as reptiles and small birds.

There was the time a huntsman ate a dead mouse...

The world was repulsed a couple of years ago when footage emerged of a huntsman spider dragging a mouse carcass across the wall of one unfortunate soul's house. This incident obviously happened in Queensland, Australia.

And there was the possum incident...

Another monstrous Hunstman was seen devouring a Pygmy possum in Tasmania, Australia (duh...).

Terrified vacationers spotted the creature during its midnight snack.

And to make things even worse, it was casually feasting on its prey on the wall of their hotel room. Australia? It's a no from me.

Though huntsman spiders aren't as dangerous as they look.

Contrary to prior belief, these formidable looking creatures are actually harmless.

Huntsman spiders famously use their venom to immobilize prey, but this doesn't seemingly have any effects on humans. Though a bite from one of these critters can be painful, they aren't deadly. Though maybe don't pop one in your mouth.

The creatures are known to invade people's homes in Australia, but are innocently looking for food and shelter. Having lived in Australia myself, I can vouch for the fact that a huntsman will pop up to say hello around once a week. Not fun, guys.

So the people of Australia have grown to expect their eight-legged visitors.

Australian's are famously weathered people when it comes to dealing with creepy crawlies. But there are still some spiders so terrifying that even the Aussies can't deal with them.

One woman in Queensland has encountered a terrifyingly huge huntsman.

So terrifying, in fact, that she couldn't find a container big enough to capture it with.

She came home to the grizzly discovery last week.

Laree Clarke, from Townsville in Queensland, turned to social media for advice on how to move the formidable critter.

The creepy-crawly was an unmissable addition to her house.

She begged other Facebook users: "Is there anyone that could remove this from my house?? Now!??? I don’t have a container that big!" You know things are bad when even your Tupperware containers are too small.

The creature was apparently bigger than her hand.

She continued, "When I went near it with the phone light it came at me raising it fangs and legs. Hell nahhhh!" Hell NAW.

One Facebook user told her to ‘kill it with fire’ while another suggested she ask the spider to ‘pay rent.’ Though the fire approach seemed to be the most popular, with several people suggested this somewhat dramatic tactic: "Probably easier to burn your house down at this point."

Though some people did offer some helpful advice.

Maybe not all Australians are arsonists after all! One woman wrote: ‘I encourage you not to take the Mt Isa approach which is deodorant and a lighter as you can burn the house down and make the news.’

Though the spider was eventually removed.

And no one died, miraculously. Laree reported later on that the huntsman had been captured and safely released back into the wild... Probably to just break and enter into someone else's home. Thankfully, this spider was found in the woman's house and not in her car. An American woman made headlines earlier this year when she literally crashed her car into a river... All because a spider crawled into her lap. Embarrassing, I know.