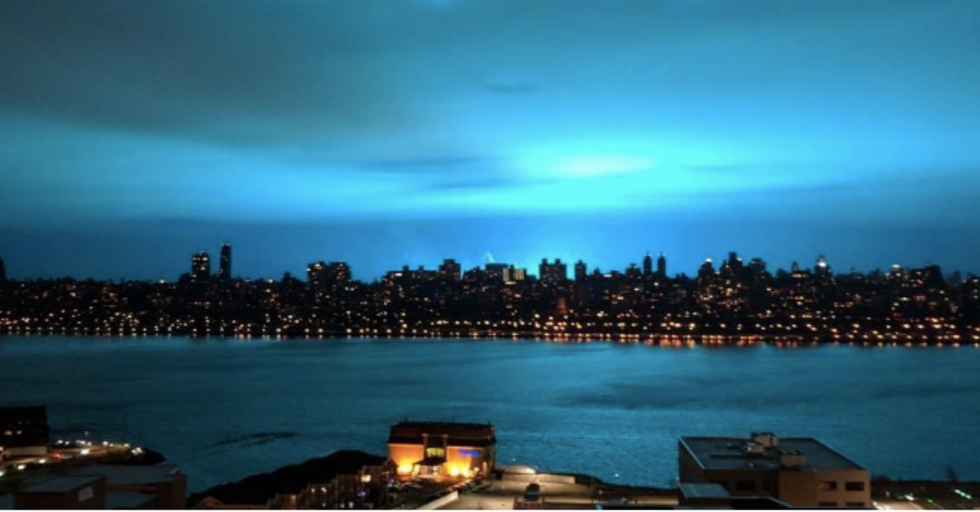 On Thursday, December 27, the sky over Queens lit up a bright, flashing blue. Thankfully, the truth is out there.

So, what actually happened was an electric emergency at a Queens Con Edison substation. New York officials are still investigating the event, but we at least have the basics figured out. Basically, an explosion caused a big ball of light to hover over Queens. Confusion over the event has given way to concern, relief– and yeah, lots of alien jokes.

We've got the full story below. Check out what happened, and how people are reacting to it. Because everyone, from the mayor of New York to Twitter comedians, had something to say!

And when it first went off, the inhabitants of Queens had no idea what was happening.

According to the NYPD, a transformer exploded at the Con Ed utility company’s facility in Astoria shortly after 9 p.m.

What would you do in a situation like that?

In fact, LaGuardia Airport temporarily suspended its operations. However, the airport was back up and running by 11 p.m. (2 hours later).

It was pretty scary, in the moment.

It's easy to imagine that light being mistaken for a bomb, instilling the fear that New York may have been under attack.

Did something just happen at Con Edison? All the lights went out and then came back and there is a blue light and s… https://t.co/kA6aktesLE
— Frederick Joseph (@Frederick Joseph)1545963679.0

Look how powerful that light is– and all the smoke surrounding it!

Here's an even closer look at the fireball:

The light radiating from Con Ed's explosion is positively blinding!

The blue fireball dissipated as suddenly as it appeared.

One second, Queens was bathed in an eerie blue glow. The next, everything snapped back into darkness.

The NYPD reported no injuries, thankfully.

Confirming incident in #Astoria was result of transformer explosion. No injuries, no fire, no evidence of extraterr… https://t.co/xJhTEfKIcn
— NYPD NEWS (@NYPD NEWS)1545970149.0

And, shortly after the incident, the source of all the trouble was identified– so the people of Queens could breathe a sigh of relief.

Now the question is how that electrical surge happened in the first place!

Some did not see the humor in the situation.

Everyone is making jokes but all of us in Astoria and Queens were outside thinking we were all getting bombed. 😕 #Queens
— Frederick Joseph (@Frederick Joseph)1545964182.0

Which is fair: blue fireballs are definitely cause for worry, in any scenario.

But others responded to the drama with some choice jokes.

Hey, you know what they say about humor as a coping mechanism.

A blue-lit NYC is the prime time for Ghostbusters references.

Yep, Zuul is coming. Who you gonna call?

Gozer the Gozarian making its appearance. Be on the lookout for a giant walking marshmallow man. #ghostbusters https://t.co/PW4fWEVVnG
— NickLoffer (@NickLoffer)1545963845.0

Pfft. I ain't afraid of no ghosts!

Think of this as a glimpse into an alternate universe.

We just found out what Twitter would have looked like if the Ghostbusters movies happened in real life.
— Rob Carlson (@Rob Carlson)1545964251.0

If the Ghostbusters movies were real, we'd be making ghostbusters jokes. Sounds legit!

Everybody stopped and stared.

everyone in New York right now, staring out their windows because they've clearly forgotten the plot of Independenc… https://t.co/3GbZUbx4H8
— LH (@LH)1545967215.0

Some people never learn. Will Smith was trying to warn us!

Others hoped this was the real-life equivalent of a radioactive spider bite.

Honestly, though, it'd be great to actually have a friendly neighborhood Spider-Man roaming NYC. Are we sure nobody there is feeling too much like an arachnid?

Anyway, this whole thing was probably just a cover-up.

One of the kids pointed out: “transformer explosion” is *exactly* the cover story they’d give after the climactic b… https://t.co/STNeFhncvE
— James Poniewozik (@James Poniewozik)1545964567.0

I can't believe the Avengers were duking it out with Thanos over there and we totally missed it!

In fact, 'Avengers' is a pretty popular theory.

That fireball definitely looked like the kind of alarming spectacle that the Avengers unintentionally cause in every movie.

It does say a transformer blew up. Of course some people would jump to the theory that a different kind of transformer detonated.

Or maybe this was an overblown baby shower.

And somehow it still turned out better than that guy who started a wildfire with his baby's gender reveal.

And some people went right for the alien invasion.

After all those action-horror movies, it had to happen some time, right?

All in all, people were pretty chill about the possibility of aliens.

Even going to far as to edit aliens into the footage themselves!

Well, the aliens won't have it easy.

Hah! Now they'll have to deal with the confusing public transport lines of NYC!

And the consensus is that peoples' reactions very much fit the 2018 mood.

It's already been a long and strange year. And now it looks like aliens are a thing, too. Yeah, sure, why not?

Maybe it was a religious event.

The epicenter of Catholicism is now Queens, NY, apparently.

It made for some interesting photo opportunities.

That lighting is not easily replicated, for sure.

The Citizen app was blowing up.

Just look at these comments, made in real time as the transformer exploded.

Conspiracy theories blew up, too.

It's always the government, isn't it? Just toss this event in with Area 51.

But the investigation in ongoing.