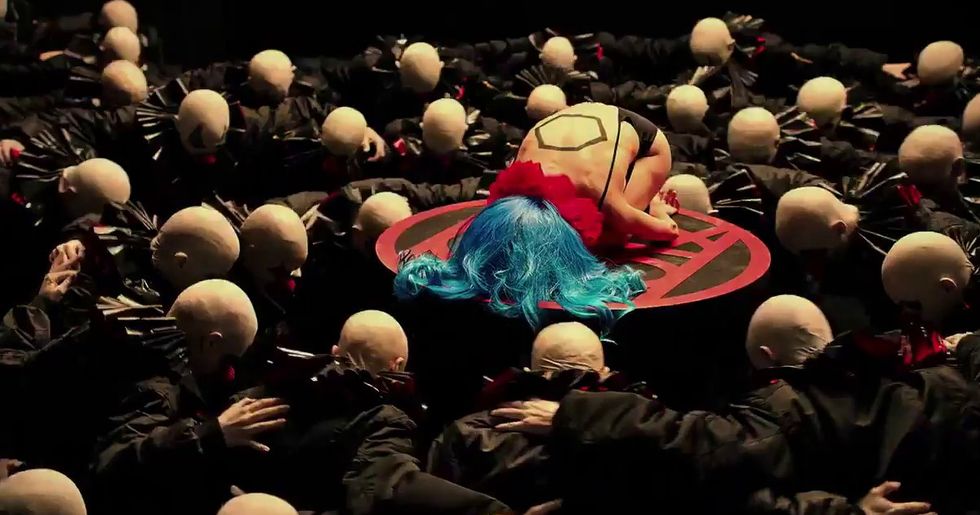 Sure, sometimes we all make mistakes. We buy the wrong size shoe, we step on someone’s foot, we buy our sister the red dress we thought she wanted but really she wanted the yellow one. It happens!

No one joins a cult by mistake. People are tricked and lied to. It’s not a mistake, it’s people falling victim to massive manipulators. There are so many cults that are still surviving in today’s world, and there are so many that people know nothing about! And they have been accused of some very serious things. It’s seriously so freaking scary.

We all know Tom Cruise as one of the many faces of Scientology, but does anyone actually really know what goes on behind those closed doors? No? Well, that’s not surprising, but that’s why you have us.

Read on to find out more about these, quite frankly, sickening cults, that are out to get everyone.

This cult is mostly after your money (but seriously, who isn't). They promote a spiritual and journey full of light (yeah, right), and then got caught for using the money for their own profit.

In France of 1976, people thought it was legit that humanity is not a concept or a debate, it's a physical thing that was created...by aliens. And that aliens are actually guiding us through bodies like Jesus. Yup. You read that right.

This cult is less interested in you and more of just what they can do in terms of all things illegal. Why do things the moral way when you can cut corners and go illegal? When did a little fraud hurt anyone?

After convincing people that she was God...yes, God...Ma Jaya convinced people to hand over their children for adoption (to get trained by her). At least they promote a good community?

So these guys think the end of the world is around every corner. So instead of enjoying every last second, why not throw away everything you enjoy and harden your life? Forget pleasure, it's all about pain for them, to prepare for the future.

Marshall Applewhite was a guy who believed that he had to carry out the Bible's prophecies. Except it got so out of hand that he and 38 of the people who believed in him committed suicide because they thought their souls would catch a ride on a spacecraft on their way to heaven.

From the outside? A normal Christian group. What was it really? Just some people promoting incest and having sex with children. Yeah. Stay away from them.

They just want to spread the word of God, and provide housing for those who are a part of their cult. Oh, also, they believe in child abuse and child labor. Just a quick FYI. They have a restaurant called the Yellow Deli.

Ever heard of Ryuho Okawa? Well, he thinks he is the reincarnation of Buddha, Jesus, and Yoda. Yup, Yoda. Oh, and he also gets his tips from dead people (including apparently, the very alive Barrack Obama).

Bernard Poolman was pretty sure he met Hitler and Jesus. And after he died, Sunette Spies was convincing people that like Poolman, she could portal and speak with the dead. But hey, at least they have a farm with some pretty horses.

Spankings, sexual abuse, and authoritarian rule are just some of the things people experience under this cult. And although we don't know what kind of labor they make people do, they make sure that you can stand for hours and at least lift 50 pounds when you sign up on their website.

They might have a nice name, but these guys are just basically Nazis. They believe the white race is the superior race, and that anyone who goes against that is basically trash.

The Apostles Of Infinite Love

Michel Collin was a big fan of the Virgin Mary. Except, much unlike her, he didn't appreciate her values. The cult has been accused of extortion, sexual abuse, and rape.

FLDS was made by men who were no longer allowed in the church. Through the years, they have promoted racism, incest, child marriage, child abuse and more. While the head of the cult was sent to prison, there are way too many people who believe in him.

Hikari No Wa And Aleph

In 1995, Aum Shinrikyo was responsible for the gas attack on a Tokyo subway. The cult split into two, with Aleph being the true successor. They are very interested in bringing about doomsday.

We all want our own adventures, and that can sometimes include fighting Satan. Well, don't wish too hard for it, because this cult believes that 144,000 people will be taken to a flying city to get ready to fight the Devil.

Congregation For The Light

From trying to predict Doomsday, to being flat-out racist, these cult members are pretty much some of the worst people out there. While they enjoy not paying taxes since they qualify as a religion, they are busy marrying old men to young girls.

Builders Of The Adytum

This is actually one of the lighter cults, who mostly just want you to buy their books. They promote a lot of magic instead of religion, which is not that harmful.

Church of God with Signs Following

This cult has taken the snake passage in the bible very seriously. They believe snakes are demons and do practices with them, and many have even died from fatal snake bites.

She believes she holds the inner light of God. Sounds great, right? Except she lives a very extravagant lifestyle, which we are pretty sure God would frown upon. She has also had trouble with the federal government.

When you are a part of this group, they make it very hard to leave. They not only buy weapons, but they use sleep deprivation against the people who want to leave.

This cult is a mix of different kinds of religions, but nevermind all of that. While they are busy trying to recruit people to follow their lifestyle, many members have been arrested for sexual assault on children.

Stewart Traill started this group because he believed that he knew the date of the second coming of Christ, and thus established a group in which people could live purely. However, power got to his head, and soon he made people stop talking to their family and friends, and had to live away from home.

Order Of The Solar Temple

A lot of people think the end of the world is near, but these people thought it wasn't war or God, but the environment that would take us (which, let's be honest, they are probably right). But when you join this cult, you don't come out. Cult members take their own lives or are murdered in ritual.

This cult will have you burying yourself in caves for months at a time, to avoid the end of the world. You may or may not die in the process, though. Although this happened back in 2008, the truth is, this can happen again at any time.

Cargo Cults Of The South Pacific

This cult is dedicated to a man named John Frum. The people hope that he will return to them with goods for them to survive, and his coming means they have survived something the rest of the world did not.

They thought they were living during the judgment days but were under fire for weapons violations. There was even a gun battle at their headquarters, and the FBI had to become involved, in a battle that left 76 people dead.

The preacher "Moon" had a movement that took off in a major way, and of course, it all had to do with religion. But when you are a part of this place, you can be certain you will be involved in mass weddings.

After a vision of Mother Mary, Clemente Dominguez Gomez declared himself Pope Gregory XVII. He told his followers to cut off ties with their families, and he was also involved in sexual abuse. Today, his followers prey on older people.

You know we had to put it in here. Sure, lots of people laugh about it, but it is serious business. It is responsible for putting people in labor camps, not letting them leave quietly, and even, some people say death.