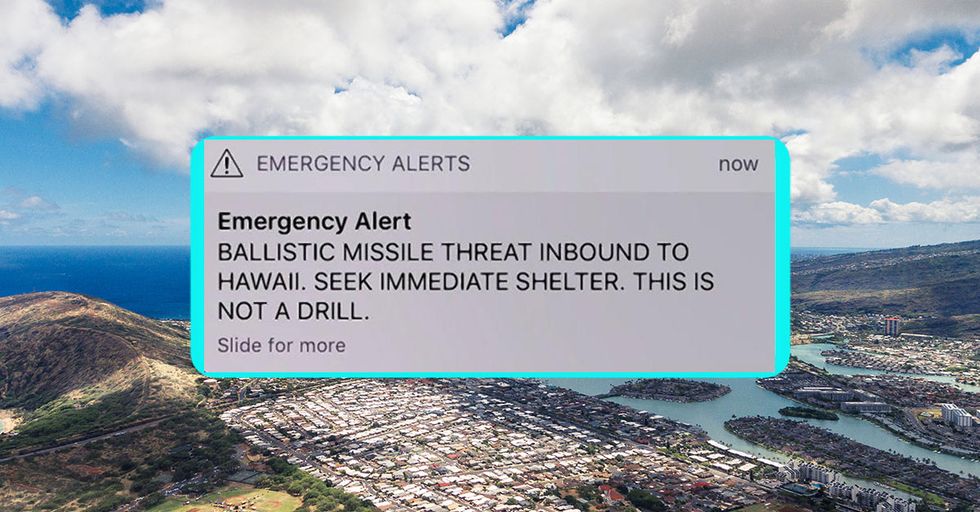 For 38 minutes on Saturday, Hawaii was sent into absolute terror and panic.

Hawaii residents and visitors were shocked and alarmed when they recieved a text notication that read, "EMERGENCY ALERT. BALLISTIC MISSLE THREAT INBOUND TO HAWAII. SEEK IMMEDIATE SHELTER. THIS IS NOT A DRILL."

Rightly so, people panicked. They called their loved ones, started weeping, ran to find any sort of shelter. It was like a horror movie had come to life, springing into action without giving anyone a chance to process.

Turns out, it was a horrible false alarm.

Apparently, it was all because someone pressed the wrong button.

According to BBC News, Hawaii's Governor David Ige explained that a staff member pressed the incorrect button, which sent out the terrifying alert. The alert was sent to phones, but also was on the radio and television.

The mistake took 38 minutes to fix.

38 minutes of pure horror for the residents and visitors of Hawaii. The panic spread quickly to loved ones in other states and countries. Twitter blew up, with people posting everything they were sent from their families in Hawaii.

The mistake was due to an employee of Hawaii's Emergency Management Agency.

It happened during a shift change. Evidently, the message was sent even despite a prompt on screen needing confirmation.

"There is no missile threat or danger to the state of Hawaii." Despite the correction, people were badly shaken up.

The state officials of Hawaii were extremely apologetic, realizing the gravity of their mistake.

In a basement under hotel. Barely any service. Can you send confirmed message over radio or tv https://t.co/qHLeQSecnd
— JJ Spaun (@JJ Spaun)1515868018.0

"I am sorry for the pain and confusion it caused. I, too, am extremely upset about this,"  Governor Ige said. "It was unacceptable that this went out in the first place but the fact that it took so long for them to put out that second message, to calm people, to allay their fears that this was a mistake, a false alarm is something that has to be fixed, corrected with people held accountable," Hawaii Congresswoman Tulsi Gabbard told ABC news.

Of course, President Trump has said nothing about the incident.

In fact, he was playing golf (shocker!) in Florida when the event happened. He's been criticized for not say anything.

Here's the thing: Hawaii has already been on edge regarding missile launches.

Why? Because of their proximity to North Korea. So getting an emergency text alert of an inbound missile is nothing short of harrowing.

It's absolutely mind boggling that this happened, but Hawaii is taking steps to make sure it doesn't happen again.

The New York Times said that a "cancellation template" will be designed to fix the problem. "Moving forward, we will focus on what steps need to be taken to prevent a similar incident from happening again," Ajit Pai, chairman of the Federal Communications Commission (FCC) said.

Hawaii State Rep. Matt LoPresti says in a shaky voice on CNN: "I was sitting in the bathtub with my children saying… https://t.co/2CpGdQaGk6
— BuzzFeed News (@BuzzFeed News)1515872373.0

The texts and phone calls that families sent to their loved ones are absolutely devastating. Thank goodness it was just a terrifying false alarm.

One video a user posted showed students rushing around on campus terrified.

Another said that people screamed and ran out of a restaurant upon learning of the message. The situation is deeply unfortunate, but we're just thankful everyone in Hawaii is safe.