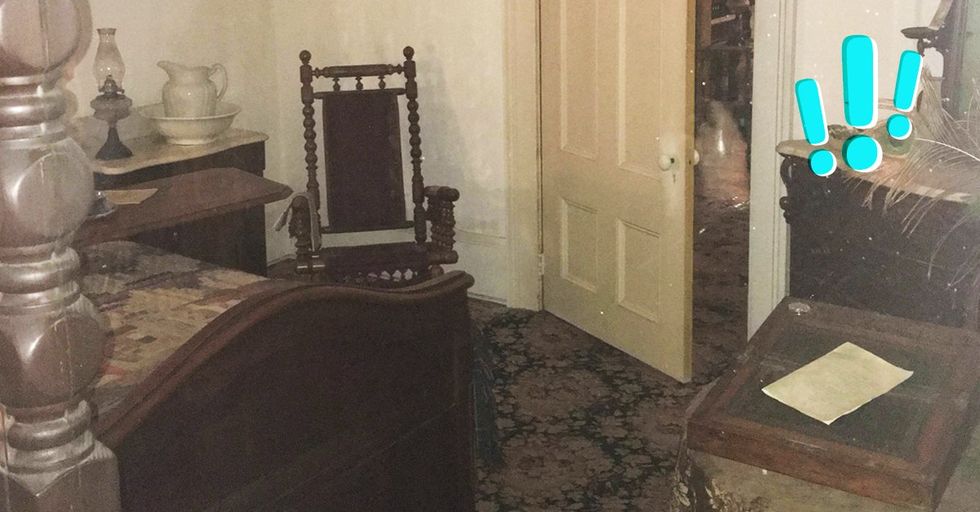 These 35 Creepy Photos of Ghosts Will Give You Nightmares

Questions of the paranormal have always fascinated enthusiasts and experts alike. Therefore, we collected the most chilling, ghostly photos.

Some pictures come from redditors who may have seen something extraordinary and others are famous among paranormal fans!

Whether you’re a skeptic or believer, check out these 20 creepy photos and see what you think after the fact.

What is on the window—or standing outside of it?

A picture from my blackberry a couple of years ago, my son was super scared of even taking a bath by himself because of “the ghost" (he was 10 at the time). -Bowman2112

Do you see a face in the reflection?

It was a snowy night in January, and I wanted to take a picture of the street from my window to show my grandma. I forgot to turn the flash off from my previous picture, and when I looked back at the pictures, I saw this. -pinkwaterlilys

The mystery of the dancing ghost girl!

This is the photo I show everyone when the subject of ghosts gets brought up. Taken in Yeater Hall at the University of Central Missouri. This is a known haunted location. -skymikez

My niece took these snaps in an old, abandoned mill in Western Australia. -nerdygamerdork From the east coast to west, check out the photos that people have snapped of possible spirits across the U.S. and beyond on the next page!

Who is that behind the door?

In April 2017 I went on a ghost tour of the Whaley House in San Diego.  I took many pictures while on the tour. Later on in the evening, I went through my photos to see if I caught anything. In the doorframe of this bedroom, there appears to be a figure looking at the camera. -Theshadebusiness

Only one person went up into that prison tower. -ohseven1098

Something appears to be hovering over this gravesite.

I never believed in the paranormal until I went to the Concordia Cemetery in El Paso, Texas last weekend. (This was taken by the children’s graves). -ChuckSawdy

This one looks a little like a White Lady.

Taken in Savannah, Georgia with an iPhone 5 or 6 years ago. There were two pictures. This is the first of the two. The second shows nothing. -Anonymous Redditor

Everyone loves a good bonfire!

Stokes state forest is haunted… -IvanYerkinov22 The next batch of photos fall into a different category: they're older, famous pictures whose contents will chill you to the bone! Check out some of the most well-known ghost photos on the next page.

The Corroboree Rock ghost was captured on film in 1959.

People have disagreed on who this looks like; Corroboree Rock is significant to local Aboriginal people, and some say the ghost resembles an Aboriginal woman. Others say it’s a woman in a nightgown or a priest.

The Boothill Ghost looks like he’s rising up through the ground!

A man took a picture of his friend at the Boothill Graveyard and discovered a second figure when the photo was developed. The ghostly man appears to either be kneeling, have no legs, or be rising up from the ground.

Here we have ‘Madonna of Bachelor’s Grove.’

via: The Black Vault

Bachelor’s Grove cemetery near Chicago is supposed to be one of the most haunted cemeteries in the U.S. The cemetery was reportedly empty when this photo was taken, and then when developed a woman in white could be seen sitting on a tombstone.

This photo comes from the haunted halls of Waverly Hills Sanatorium.

The sanatorium, an abandoned tuberculosis hospital from the early 1900s, is one of America’s most haunted buildings. Some believe that the figure in this photo is Mary Lee, a nurse who committed suicide in the hospital after being impregnated by a doctor.

A professional photographer caught this picture in England.

While doing some photography for an upcoming wedding, photographer Neil Sandbach caught this image of a child dressed in white—and it wasn’t the first time such a figure was seen around the farm. On the next page, see what is perhaps the most infamous of all ghost-photos!

This ghost was captured in an image as the building around it burned.

Taken at Wem town hall in Shropshire, England, as the hall in question caught fire, it was determined by some that the entity had to be spiritual, as a living person couldn’t withstand the heat in such proximity.

This ghostly photo was taken as the ghost in question’s funeral was taking place.

See that figure sitting in the chair? It is thought to be the ghost of Lord Combermere, who died after being hit by a horse-drawn carriage. His funeral was held a mere few miles away when this picture was taken at the Combermere Abbey Library.

The Phantom Monk of Newby was caught on camera in 1963.

This creepy and imposing figure was found in a picture taken by a Reverend at Skelton-cum-Newby Church of Christ the Consoler. Whatever is in the photo looks humanoid, is extremely tall, and appears to have some kind of mask or deformity on its face.

Experts from Kodak concluded that this photo hadn’t been tampered with.

The Tulip Staircase ghost was captured on camera in the Queen’s House section of the National Maritime Museum in Greenwich, England in 1966. This hasn’t been the only reported ghost sighting at the Queen’s House, either!

This image—arguably the most famous ghostly photo—was taken in 1936 at Raynham Hall, Norfolk, England. According to legend, the subject is Lady Dorothy Walpole, who died under mysterious circumstances in 1726. If you're a fan of all things paranormal and you enjoyed this story, share it with your ghost-loving friends. There are plenty of frights to go around!

They had an unwelcome peeper.

These pictures have not been altered whatsoever other than brightness changes so that you can see everybody (Or lack thereof) in full detail. Feel free to check it for doctoring or any reverse image search. These are personally the scariest photos I've seen on this subject but I have a tough time acknowledging that they actually contain my back (And dog). -SupportLocalShart

A ghost in a graveyard:

Now that story is mildly terrifying.

See the face behind the ladder?

Apparently a little girl died in front of the right window. Look in the bottom of the window. Also there other picture of this window by other sources where the face is captured but in different locations, so it isn't a physical object inside the house. -Imgur user

My friend was walking with a few friends and one of them said they saw someone in the school. Rather than approach (considering it was 10 pm) My friend just took a picture to show the police. An officer told her the building was vacant and the alarms were on. When my friend went back the figure wasn't there anymore. -jelloc

What do you see in this photo?

I see a man of around 60-70, mostly bald with salt/pepper hair. He has his left hand up and looks to be examining the wall. -Kaz81

Someone—or something—is sneaking through the background.

I spy with my little eye…

Can somebody look at this pic, and tell me if they see a man with his arms folded in the centre? It’s an old pic of an old abandoned mental institution near my house. Pic was taken in 1998. -ikaite

Something is in the window.

And it looks a bit like a woman, doesn’t it?

This ghost was caught on video (warning: the sound on this video is LOUD).

This apparition was caught by paranormal investigators Jim and Billy McClency on a live feed during hurricane Florence. -ghost guys go

When your dog starts barking at nothing, it’s a bit creepy.

What do you do when a ghost comes knocking at your door?

Even ghosts must want to pet a dog every now and again.

My brother is in the middle of the ocean on the Research Vessel Knorr. The crew is frequently visited by a ghost. Last night they finally got two pictures of it and he just emailed them to me. He said he was on the bridge and heard the screams! -robbace

She’s hiding behind the door.

Can you see this terrifying little visitor?

Spirit photographer William Mumler took this photograph of Mary Lincoln, and believed that the shadowy figure above her was her late husband, Abraham Lincoln.