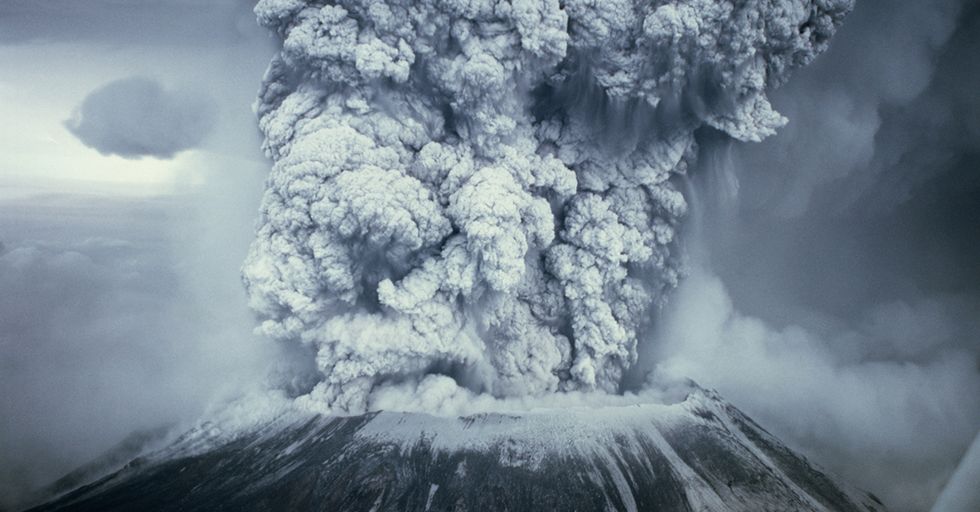 If you haven't already had a nightmare about the world ending, then today's your lucky (or unlucky) day.

There is such a weird fascination with how the world will end. Don't believe me? Just look at some Hollywood flicks. It's a pretty popular theme. Everyone has their own theory: fire, flood, giant meteor, aliens, global warming, a crazy president. There are many ways this could go down, but when we look to science, it seems like there are some theories that are more plausible.

Let's just say, I hope scientists are very wrong with their theories on what will happen in the coming years. But, the good news is that we will (hopefully) all be gone before anything were to happen.

Imgur user WannaWanga did some serious research to find all the possible fates of our planet*nervous laugh* and it is pretty disturbing and kind of fascinating.

The world is going to end one way or another, right? Now that we can all agree on that let's look to science to see all the ways our Earth could explode.

In10,000 years, we could be pretty deep in water. I'm talking 10-13 feet. If the Wilkes Subglacial Basin "ice plug" fails and collides with the East Atlantic Ice Sheet, we are going to need some floaties ASAP.

In 13,000 years, the Earth could be on its reversed axil, meaning that summer would be winter and winter would be summer. Which, would cause just absolute havoc for every living thing.

There's something called the Sahara Pump Theory that predicts some weird stuff happening to the Sahara Desert. In about 15,000 years, it is possible that the Sahara could have a drastic change in appearance. The precession of Earth's poles might move the North African Monsoon far enough north, changing the desert landscape into a tropical climate.

Meet Ross 248. You can call him Ross, destroyer of the universe. This red dwarf star will pass by in about 36,000 years, making it the closest star to the sun. This can cause some serious heat issues and intensity. Ross does not play games.

Powerful Niagara Falls will erode Lake Erie almost entirely, and in about 50,000 years, we could be back in another ice age. Two scientists, Berger and Loutre, said that the current interglacial period ends sending the Earth back into a glacial period of the current ice age. Grab your winter jackets people. It's about to get very cold.

A star called VY Canis Majoris will cause a hypergiant problem in 100,000 years when it explodes into a hypernova. This will make most constellations near it almost entirely unrecognizable and mess with the gasses in our atmosphere. Then Earth could have a massive supervolcanic eruption. It's a pretty terrible chain reaction that leads to ultimate death and destruction.

200,000 years ahead and we might be getting a little sweaty. More celestial bodies will be moving in space, causing some like the Big Dipper, to not exist at all. The prediction is that this will cause this cute little volcano named Loihi to rise above the surface of the Pacific Ocean and become an island and eventually erupt.

Another pretty ticked off star may have had its last straw. Meet Wolf–Rayet star WR 104, who is expected to explode in a supernova in about 300,000 years. It will probably show no mercy with its gamma-ray explosion and may take all life on earth.

There's just no avoiding this one. In about 500,000 years, we'll get smashed with an asteroid. At least it'll be quick.

One million years in the future, we will be drowning in magma. Earth will undergo a supervolcanic eruption. Glass will no longer exist on earth, and the only thing that will possibly be standing is Mt. Rushmore, so that's a plus.

The coral reef will need some serious time to recover from all the harm done by us humans. The estimated time for the restoration of coral reef ecosystems from ocean acidification is about 2 million years. The impact this will have on the earth is pretty significant.

The East African Rift valley will be flooded by the Red Sea, causing a geographical dilemma. In 10 million years, a new ocean basin will divide the continent of Africa and the African Plate. There will be a huge gap between pieces of land in Africa.

While Mars explodes, the San Andreas freak out.

Okay, so maybe Earth is doing alright in 50 million years, but don't get too comfortable. Phobos, a moon orbiting Mars, will most likely collide right back into Mars and the consequences for us Earth-dwellers is kind of crazy. The San Andreas Fault will cause Los Angeles and San Francisco to merge. Could you imagine the traffic? The Californian coast will begin to be subducted into the Aleutian Trench, which is near Alaska. Africa's collision with Eurasia closes the Mediterranean Basin and creates a mountain range similar to the Himalayas.

Pangea is back with a vengeance. In 250 million years, all of the continents might merge into one, yet again. History repeats itself, people! They are thinking about naming this new continent Novopangaea or Pangaea Ultima, which I think is very fitting.

600 million years in the future is looking a little dry. The Sun is going to cause some craziness. Its rising luminosity will disrupt the carbonate which will trap a lot of carbon dioxide in the ground. Then the volcanoes that are taking over our earth will pump all the carbon dioxide out, causing levels to be extremely low. If you remember anything from high school science class, you'll know that this will make photosynthesis impossible. Therefore, trees will be gone and most vegetation will be extinct.

Since photosynthesis is gone by now, 800 million years in the future, pretty much all life will be nonexistent. Two scientists, Peter D. Ward, and Donald Brownlee think that some ocean animals may be able to exist, but since oxygen levels in the water will be dangerously low, they'll probably be gone, too.

Did you just cringe at that word or was that just me? If you hate humidity or heat, then you for sure don't want to be alive one billion years in the future. The average temperature on earth will be 116 degrees due to a 10% increase in the Sun's luminosity. Better stock up on some sunscreen.

Atmosphere? Never heard of it

The liquid outer core of the earth will eventually freeze over causing Earth's magnetic field to shut down. Translation: it's going to get even hotter. In 2 billion years, the average temperature on Earth will be about 300 degrees.

The Earth could end simply due to some crappy odds. 3 million years in the future, we would have to place a bet. There's a one in 100,000 chance that Earth could fling into interstellar space and a one in 3 million chance that another star could capture us.

Our two good space friends, the Milky Way, and Andromeda Galaxy will eventually merge, creating a "Milkomeda." Sounds like a cute couple name, right? 4 billion years doesn't seem too long for them to wait for each other.

In 5 billion years, hydrogen will be unheard of. This means that the Sun will end up evolving into a red giant.

It's all going down here from now folks. In 7 billion years, the Earth will probably be covered in an ocean made of lava. The Earth and Moon will then get sucked into the Sun, just before the Sun turns into a red giant. It's not looking too bright for us.

Here's a different ending: we might freeze! In 8 billion years, temperatures might drop increasingly due to the Sun shrinking to about half of its current size. Someone call Elsa, it's time to build a snowman.

The Sun will be throwing some shade. In 14 billion years, the Sun could turn into a black dwarf, which would make it impossible for humans to see.

In 50 billion years, if the Earth and moon survive (keyword: if), then they will become tide-locked, which means gravity is holding these two together. They will only be showing one face to each other causing the lunar orbit to decay. The Earth's spin would increase and who knows what could happen then.

Expanding until we disappear

The universe will expand so wide that we will disappear beyond the cosmic light horizon. This could happen 100 billion years from now, so we aren't disappearing just yet.

In one trillion years, we could experience the Big Crunch. Stars will be close together, colliding and exploding, and it's just a big old mess. Temperatures will be about 180,000 degrees, meaning stars will no longer be able to handle their own hotness. Then they will slowly cook themselves until they explode. Then, all the black holes in the universe will merge into one giant black hole containing all the matter in the universe. Here comes the finale: the black hole will then devour the universe, including itself.

Stars are making no new friends. All the free hydrogen is gone, which would be used to form new stars. Any remaining stars exhaust their last bits of fuel and then slowly die. The Milky Way, which has a rough estimate of about 100 billion stars, would only have 100 stars left. Retweet if you cried a little.

You guys will really want to read the whole Wikipedia page on this thing. It is described as: "a self-aware entity that arises due to extremely rare random fluctuations out of a state of thermodynamic equilibrium." Basically, we'll be long gone before any of this happens. Yay!

Quantum tunneling, a pretty rare phenomenon, if given an isolated patch in a vacuum of space, could create a whole lot more problems. Due to inflation, all of this could create new Big Bangs and lots of new universes.

Who knew there were so many ways we would be saying goodbye to our beautiful Earth? I'm living in an actual nightmare. Good thing we are pretty far off from most of these things happening.

It's all quite overwhelming, we know, but what's the fun in keeping all this new information to yourself? Share this article with your friends to revel in the doom.