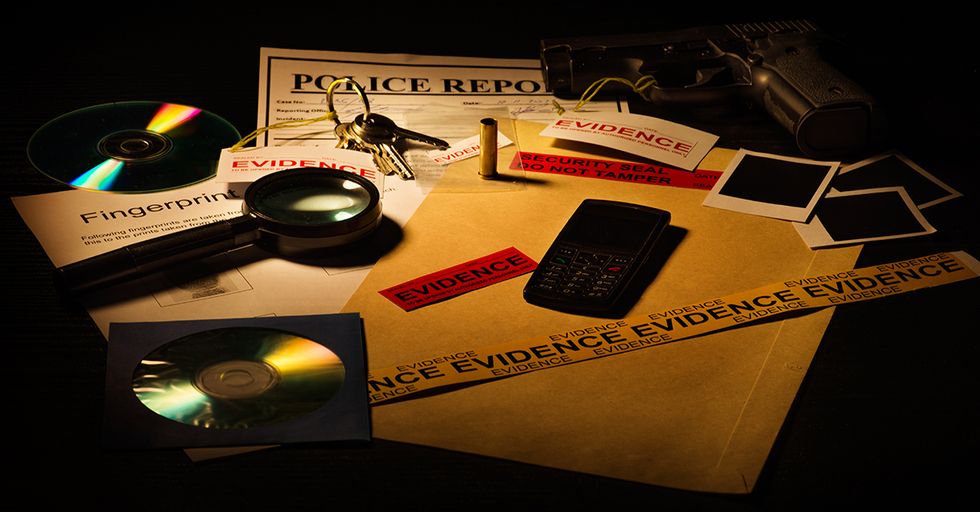 True crime is absolutely addicting. If you're a true crime addict, you know how easy it is to fall down the rabbit hole. Whether it be with podcasts, TV shows or books, there's something morbidly fascinating about true crime. But it's also really easy to scare yourself when indulging in the obsession. If you're like me, you can't stay away, but you also freak yourself out.

The only thing more terrifying than true crime is a true crime that hasn't been solved. The mystery that surrounds certain cases can be haunting and hard to stop thinking about.

Here are unsolved crimes that will haunt your dreams and send you spiraling down google, desperately seeking the answers. Read at your own risk! (But, let's be real, you're definitely going to read because you're as addicted as I am.) WHAT'S WRONG WITH US?

In the '70s, the West Coast was an extremely attractive place for serial killers, but one that got away was named "The Doodler." The doodler is believed to have killed anywhere from five to 14 men in San Francisco between January 1974 and September 1975. The Doodler specifically targeted gay men. He would stab them to death and leave their bodies in parks or beaches around the San Fransisco area.

The murders of Abigail Williams and Liberty German

On February 13, 2017, in Delphi, Indiana, middle school buddies Abigail Williams and Liberty German went hiking. The next day, their bodies were discovered near a creek. Liberty took an audio recording of her killer, and in the recording, the voice is heard saying, "down the hill." Absolutely horrifying.

The mystery of the Flannan Isles Lighthouse

In 1900, three men who worked in the lighthouse mysteriously disappeared and were never found. Talk about an eerie mystery.

This one is really creepy. In the '50s, a bunch of experienced hikers decided to take a trip and ski in the former Soviet Union. They were thought to have disappeared, but their bodies were found months after their trip. All nine were dead. One body was missing a tongue and both of their eyes. The investigation said that an "unknown compelling force" was the cause of the deaths. In 2013, the movie Devil's Pass was released and the plot drew inspiration from the incident.

Where did Gary Mathias go?

Strange disappearances are always super creepy. Mathias and four friends went to a basketball game in 1978. They were last seen alive at a convenience store. Mere days later, their car was discovered on an abandoned road and the bodies of the four friends were found months later. Gary Mathias' body was never found.

The case of the Grimes sisters.

The creepiest part about this case is that there is a disturbingly high amount of people who claim they saw the two sisters alive the night of the murder, and before the discovery of the bodies. The murder has never been solved, nor has there ever been any answer as to why people have seen the girls.

Okay, so maybe this isn't a crime, but it's still insanely weird. Back in 1876, it started to rain meat in Kentucky. Yes, you read that correctly. The incident was known as the "Kentucky Meat Shower." Okay, now back to horrific crimes.

The Hammersmith Nude Murders refer to the series of murders that took place in London. Nicknamed "Jack the Stripper," he is believed to have killed at least six women, abandoning their bodies without clothing.

The Black Dahlia murder is one of the most popular and sensationalized murders, and it has remained a gripping mystery to this day. Back in 1947, Elizabeth Short was found murdered and mutilated. She was sliced in half at the waist and drained of her blood.

The Boy in the Box

This one is super depressing. In 1957, a young boy's body was found in a box in Philadelphia. They were never able to identify him. He's known today as "American's Unknown Child."

Back between 1918 and 1919, many murders occurred in New Orleans. Victims were killed by the axes in which belonged to them. Very, very spooky.

In 1981, the Sharp family and a friend were murdered in cabins at the Keddie Resort, in California. Though murders remain a mystery, there have been two suspects. Internet bloggers have theorized that the horror film, The Strangers, was based on the Keddie murders.

The Smoke that Took the Children

In 1945 on Christmas Eve in West Virginia, the Sodder family home went up in flames. What's disturbing about this story is that decades later, the remains of the children still haven't been found.

The Murders at Bear Brook

Four unidentified female bodies were found in 1985 and 2000 in Bear Brook State Park, in Allenstown, New Hampshire. The victims are believed to have died sometime between 1977 and 1985.

An unidentified man was found deceased on the shores of Adelaide, South Australia. Poison traces were found in his body, and a note with the phrase tamám shud, meaning "ended" was found on him.

The murders at The Hinterkaifeck Farmstead

In 1922, six people were murdered at the Hinterkaifeck Farmstead in Germany; they were killed with a mattock. The case remains unsolved to this day.

In 1998, Amy Lynn Bradley went missing on a cruise ship. In 1999, a member of the US Navy reported that a woman in a brothel had claimed to be Bradley, and asked him to help her. She is still deemed as "missing."

In a terrifying case (between 1969 until 2011), it was reported that around 18 women had either disappeared or were murdered along Highway 16 in British Columbia while hitchhiking.

The Murder of Kyllikki Saari

In 1953 Finland, the body of teen Kyllikki Saari was found. Saari had been biking home from a prayer meeting. Her murder remains unsolved.

While on holiday in Portugal from the UK with her parents, 3-year-old Madeleine McCann disappeared from the hotel room where she was sleeping. The case was highly publicized and extremely popular on the internet.

The Murders at Lake Bodom

In Finland in June 1960, one boy and two teenage girls were found stabbed to death with rocks at Lake Bodom.

Occurring between the evening of June 9, 1912, and the morning of June 10, 1912, the six members of the Moore family and two guests were found bludgeoned to death in their house. All of the victims had head wounds from an axe.

If you live in Los Angeles, then you're familiar with this spooky story. The disappearance of Elisa Lam, whose body had been found in the water tank of the Cecil Hotel. Surveillance footage of Lam behaving oddly in the hotel elevator before her death led to a ton of conspiracy theories.

Who put Bella in the Wych Elm?

In 1943, a group of boys made a terrifying discovery when they found a woman's skeleton hidden in the trunk of wych-elm. Since the story broke, there's been strange graffiti in the area asking "Who put Bella in the wych-elm?" The skeleton remains unidentified.

Mr. Cruel is the name dubbed to the Australian serial rapist who attacked three girls in Melbourne, Victoria in the late '80s and early '90s.

In December 1999, Ashley Freeman and Lauria Bible disappeared in Welch, Oklahoma. The following day, the Freeman home was burned down, and Ashley's parents were killed. Both of her parents were shot in the head before their bodies were burned in the fire. In 2018, it was reported that Ronald "Ronnie" James Busick was arrested and charged with the four counts of first-degree murder.

In 1982 in Chicago, there was a series of poisoning deaths due to drug tampering. Tylenol had been laced with cyanide, and a total of seven people died as a result. There were subsequent copycat murders after that.

The Disappearance of Brian Shaffer

Shaffer was a medical student at Ohio State University. On Mach 31, 2006, Shaffer and friends went out to celebrate spring break. He parted ways with his friends, but a security camera near the bar recorded him speaking to two women around 2 a.m., and then he entered back into the bar. He has not been seen or heard from since.

You might want to sleep with the lights on tonight.