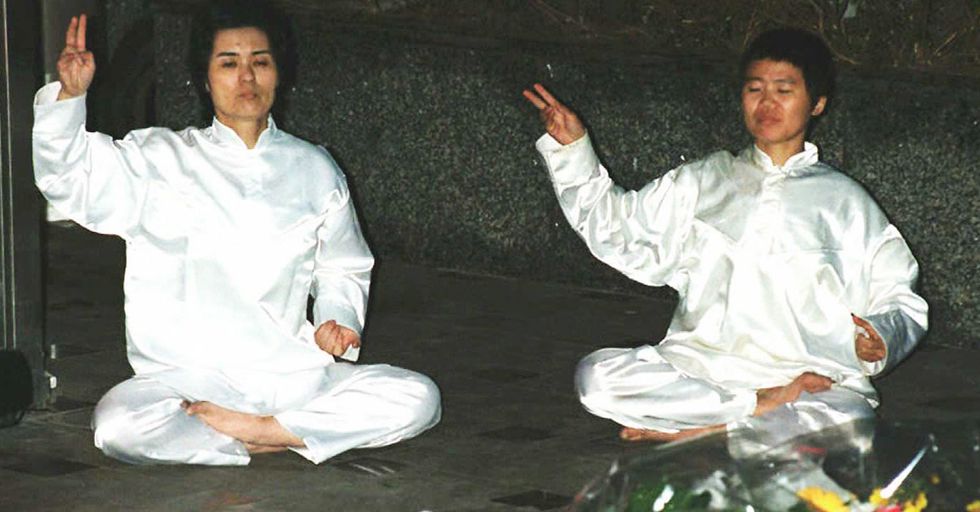 Wikipedia is a great place to learn about some not-so-great topics. It's a rabbit hole of weird stories, untold tales and mysteries that just don't make sense.

Here are some crazy cult stories that Wikipedia did their research on. Grab your blanket and keep the nightlight on because these are sure to give you the creeps.

These stories, all found on Wikipedia, feel like pages straight out of a horror novel. You might have heard of some, but others will be brand new and totally terrifying. Warning, some of these contain some pretty graphic content.

Edmund Creffield started this "love cult" in Corvallis, Oregon in 1903. He opened his own church called the Bride of Christ Church but others called their followers the Holy Rollers because they would spend hours rolling on the floor, crying and praying.

This cult attracted a lot of women, which was creepy because Edmund would just stay in his house for hours with a bunch of different women.

He got arrested for adultery then claimed he was Jesus Christ when he was released because he resurrected from jail.

Adolfo believed he could use his magic spells to grant protection and success to drug cartels. He sacrificed animals and humans to perform these spells and is responsible for murdering and torturing family members of drug cartels and even random strangers. He was responsible for the murder of the American student Mark Kilroy in 1989 and for killing 15 people in what they called a "slaughterhouse".

Father Yod and The Source Family

I know there are some pretty crazy people in Hollywood, but this is on another level. James Edward Baker, who named himself Father Yod, owned a healthy restaurant in the Hollywood Hills that was very popular. He then started spiritual commune and wanted his members to all live together in one home. He had 14 wives and 3 children. Oh, and he was also in a band called Ya Ho Wha. He just did a little bit of everything.

Members of the Ripper Crew, also known as the Chicago Rippers, were known to abducted 18 women. Most of these women were abducted, raped and mutilated. Four men were caught and sent to jail in the 1980s, but one of them is set to be released soon. The next one will freak you out beyond words.

Also known as the Great White Brotherhood, this cult was led by Anne Hamilton-Byrne. Their main goal was to build a perfect race with over their 500 members. Anne would acquire children at a young age and bleach their hair blonde and inject them with LSD and other drugs, other times starving them and refusing access to the outside world.

Movement for the Restoration of the Ten Commandments of God

This cult broke away from the Roman Catholic Church in Uganda in 1989. The two founders made the foundation of their new group to strictly follow The Ten Commandments of the Bible. They focused on the end times specifically. Their cult came to an end when their church burned down and killed over 900 members.

These folks broke away from the Russian Orthodox Church and called themselves the True Russian Orthodox Church. The founder, Pyotr Kuznetsov, told the followers to reject all processed foods and all their followers believed that barcodes were satanic symbols. Members hid in caves, threatening mass suicide if anyone tried to intervene. Eventually, the members were forced out of the cave because its walls were collapsing in.

Order of the Solar Temple

This secret society was based off of the ideals of the Knights Templar. Their groups lived in France, Switzerland and Canada and is most known for their mass suicides and murders. They also killed a three month old child because one of their leaders believed he was the Antichrist.

This Japanese doomsday cult is responsible for multiple poisonous gas attacks in Tokyo in the mid 90s. They used sarin to attack a subway in Japan, killing 13 people and affecting almost 1,000 people's long term health. This cult is still active today. Next up is a scary mother-daughter duo that would freak anyone out.

Also referred to as The Great Eleven Club, this cult started in 1922 in Los Angeles and performed some pretty dark and twisted acts. A mother and daughter believed they could communicate with angels and resurrect people from the dead. They were found guilty of putting one of their members in an oven, poisoning another member and many of their other members were never seen again.

Hope you’re ready for this one #creeps! This week we’re talking #RochThériault and the Ant Hill Kids — and it ain't… https://t.co/P6XoICACxB
— Twisted Sisters (@Twisted Sisters)1516728589.0

The founder of this cult, Roch Thériault, believed he was a prophet, which made him do some pretty crazy things. The Ant Hill Kids were formed in Canada in the 70s and 80s and they followed strict rules enforced by Thériault. If members wanted to leave, they were severely punished and some of them were forced to break their own legs. At the time of Thériault's death, he had 26 children. He was sentenced to life in prison, where he died supposedly because of another inmate attacking him.

Founded in 1955 in Indianapolis, Indiana by Jim Jones, this cult is known for the Jonestown Massacre, where over 900 people died simultaneously. At its peak, over 200,000 members were apart of the Temple.

Everybody knows how this story goes. Charles Manson started a cult where he ordered other people to commit murders. They gained national attention after they found guilty of the murder of actress Sharon Tate.

NXIVM is a cult disguised as a multi-level marketing organization. It gained serious news coverage because Smallville actress Allison Mack was arrested for being a part of the sex trafficking that was happening within the company. The next one is has been made into a Netflix documentary series, so you know it's got to be good.

If you're looking for a new Netflix series, Wild Wild Country will definitely peak your interest. This series covers the cult Rajneeshpuram that made its home in the hills of central Oregon. Their cult leader Bhagwan Shree Rajneesh drew in many followers and created a utopian city that drew national attention.

In San Diego in 1974, this religious cult started. One of their main beliefs in was in the existence of UFOs. Their leader, Marshall Applewhite, led the group to perform a mass suicide where 39 members killed themselves, believing they would reach an extraterrestrial spacecraft following Comet Hale–Bopp.

You might recognize this cult because of the Waco siege in 1993. Cult leader David Koresh lived in the compound with his members. The ATF and FBI led the siege that lasted 51 days and ended with firearm attacks, tear gas and 76 people died.
How are you doing now that you're at the end? A little freaked out? That's okay, me too. Share this with that one friend who says nothing freaks them out. This ought to do the trick.