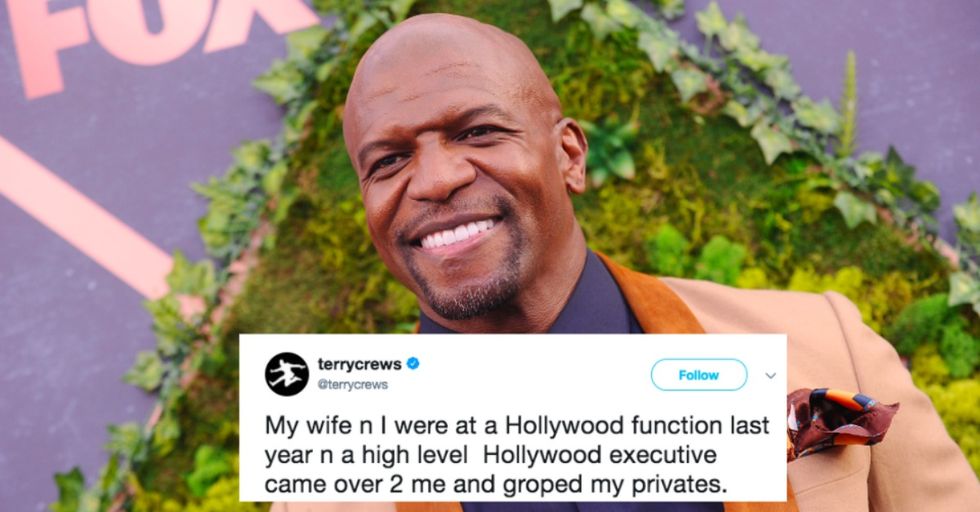 Actor Terry Crews bravely came forward with his own story of sexual assault in the wake of the allegations against Harvey Weinstein. Now, Crews has filed a police report with the city of Los Angeles and plans to press charges against his abuser. As more and more allegations are made public, it's unclear how many will actually result in criminal charges. Crews' very concrete step means he's taking a courageous hard line against sexual abusers and the power they've held until now.

Last month, Terry Crews told the story of his own sexual assault at the hands of a powerful male Hollywood executive.

At the time, he did not name his abuser, instead explaining in a moving Twitter thread that if he retaliated right then and there, at a Hollywood party, he would be "ostracized."

It was the bombshell report about Harvey Weinstein that prompted Crews to share his own story.

Crews explained that he was with his wife at a Hollywood function when "a high level Hollywood executive came over 2 me and groped my privates." He jumped back and stopped himself from "kicking his a**." He knew that if he did, the headline the next day would be "240 lbs. Black Man Stomps Out Hollywood Honcho."

So, Crews explained, he and his wife left the event. But he told what had happened to everyone he knew who worked with this guy. According to Crews, the Hollywood exec called the next day to apologize "but never really explained why he did what he did."

Crews wrote that he understands why women don't take legal action against their abusers. He didn't at the time because he didn't want to be ostracized, which is "par for the course when the predator has power and influence," as they almost always do. But now, Crews has decided to file a police report and make sure his abuser is held accountable for his disgusting actions. Crews told TMZ that he plans to file a civil lawsuit and criminal charges.

Sources have told TMZ that the person Crews named in the police report is Adam Venit, the head of the motion picture group at William Morris Endeavor.

Venit is a high-powered agent who represents top actors like Emma Stone, Adam Sandler, Diane Keaton, and Eddie Murphy. Venit has been placed on leave by the talent agency during the investigation. Reps for WME and Venit have not commented on the allegations.