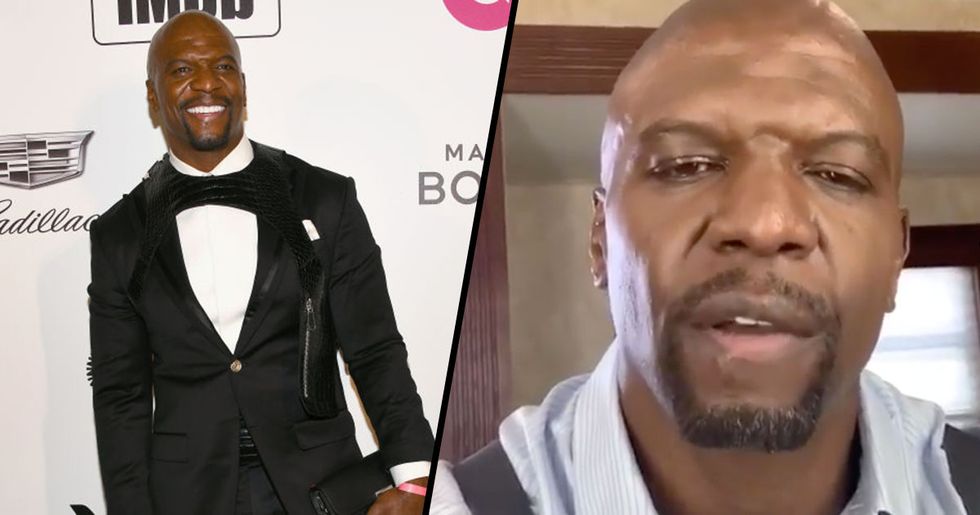 Everybody knows that Terry Crews is a nice guy. If there was an award for a nice guy, it would go to Terry Crews. If the world was burning and there was a spaceship going to Mars, but there were only a few seats, no one would begrudge Terry Crews getting a spot. He's a decent guy, we like him, and so, when someone berates him on Twitter, no one is going to stand for it... not even Terry Crews himself.

Continue scrolling for the scoop.

The drama started at Universal Studios.

Crews was at a public Halloween event at the studios. Sharing pictures on his personal Instagram account, the actor was having a great time.

He took his family along.

The Universal Studios trip allowed Crews an opportunity to spend some valuable time with his family.

America's Got Talent keeps him busy.

And, boy, are we all glad he got that gig. I honestly don't think that there's ever been a better presenter of the show.

When Crews isn't working on Brooklyn-Nine-Nine...

He's busy doing a load of other acting gigs, charity work, and other projects. You can appreciate that, when he's off-duty, the actor and television personality probably doesn't want cameras waving in his face.

The twenty-four-year-old photographer also happened to be at the Halloween event at Universal Studios.

Erica took to Twitter after her encounter with Crews.

I think the spookiest thing that happened last night at Horror Nights was when Terry Crews RUDELY said “UH Nooo” when I asked for a picture
— Erica Contreras (@Erica Contreras)1570391388.0

She described Crews' refusal to get a photo with her as "spooky."

Terry Crews was not about to get ripped online...

And then she has the audacity to berate him on Twitter. The nerve, eh!

Other fans spoke up in defense of the actor.

Terry Crews was applauded for standing up for himself. It was quite clear that Erica was in the wrong.

Everyone was in agreement that Erica needed to take a long, hard look at her actions.

I mean, if Terry Crews of all people calls you out, then you really must have been a bad egg.

Erica decided to release a statement...

Oh dear, she couldn't just accept that she had done wrong. By accusing Terry Crews of being a liar, Erica just made the whole pickle worse.

She hadn't quite grasped what was happening.

Crews had called her out for not allowing him some private time with his kids. For some reason, Erica couldn't seem to grasp that it wasn't actually rude for Terry Crews to decline to get a photo with her.

Eventually, she kind of issued an apology.

I didn’t expect to receive all this negativity and hate over this tweet. I’m a big fan of Terry Crews and would nev… https://t.co/EhEomwiEGh
— Erica Contreras (@Erica Contreras)1570476600.0

She tweeted again saying that she would never want to disrespect Terry Crews or his family... Well, guess what Erica? I'm afraid you did do just that.

I guess we live and we learn...

As one wise Twitter user stated, we must remember that the social media site is. in fact, in the public domain. If we don't want people to read our tweets, we should either make our accounts private, don't tweet hate to celebs, or just don't use Twitter at all, period.

Erica is right about one thing...

What do you think, Terry Crews?

...I'll take that as a "yes, you're right." Continue scrolling to read all about how Greta Thunberg expertly dealt with Donald Trump trolling her on Twitter... Honestly, what a world we live in!