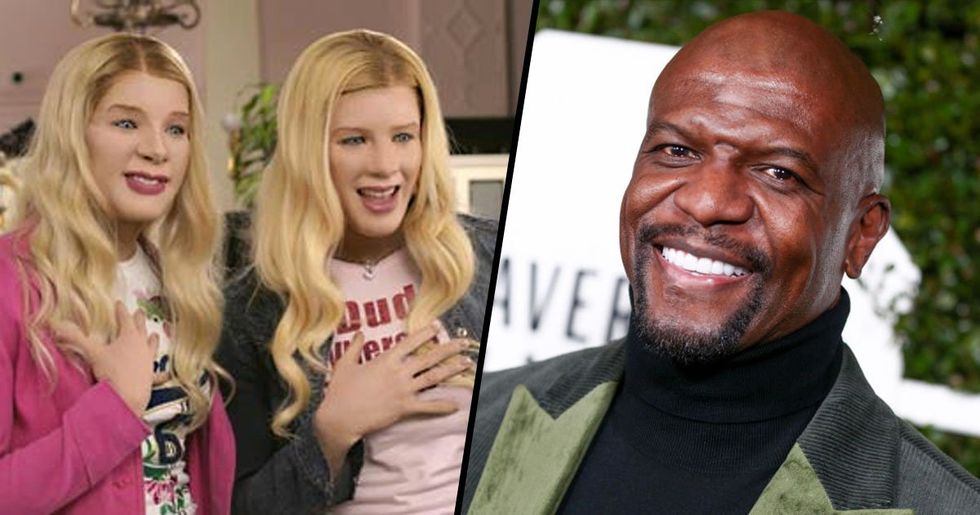 White Chicks is a comedy that's as beloved as it is controversial. It follows the story of two undercover cops who go for a rather... interesting disguise, swapping both their gender and their race in order to protect a pair of socialites from a string of kidnappings. While it may not sound like the makings of a classic comedy, it was extremely well received by audiences. It's gone on to become a cult-classic, with many delighting in its slapstick silliness.

For a long time, audiences have hoped for a sequel to the original movie, but the status of any follow-up was unclear. Star Marlon Wayans has teased potential for another movie, and now romantic lead Terry Crews appears to have confirmed it. Speaking to Us Weekly, Crews discussed how excited he would be for a White Chicks 2 - and says he's sure it's "going to happen." Crews also revealed his reasons for believing in the movie so much.

Although many criticised the film for being low brow and to obvious, it garnered a legion of fans and a cult following, thanks to its silly humor and shock value.

It was essentially a vehicle for the Wayans brothers.

The movie's leads were played by Shawn and Marlon Wayans, pictured here at the Los Angeles premiere - although the two are somewhat unrecognisable in the film itself.

Because they spend the majority of the film looking like this.

The brothers go undercover as a pair of white females, taking gender swapping to a whole new level by throwing transracialism into the mix. Sounds problematic, but for the film, it works.

Another star of the movie is Terry Crews.

He plays basketball star Latrell Spencer in White Chicks, and becomes an unlikely romantic lead when he develops a crush on one of the undercover brothers.

The scene in which Crews takes Wayans on a date is one of the movie's most famous.

The cringe factor is totally huge, as Crews is somehow completely duped by the cop's disguise, and goes all out in trying to impress - in a variety of, quite frankly, horrendous ways.

In the car after the meal, Crews serenades his "lady" with a Vanessa Carlton track. The scene has gone down in history, and is an iconic element of the movie. It made Crews a firm fan favorite.

Because, try as Wayans might, he can't seem to shake Crews off.

Wayans does a ton of acting up on the date to try to extinguish the desire Crews seems to feel for him - but to no avail. It seems whatever Wayans does, it just makes Crews like him even more.

And when all is revealed, Crews is not too happy.

In fact, Latrell is one of the few characters who doesn't seem to get a happy ending, and is just left confused and dismayed. It's no wonder Crews doesn't feel done with the part yet!

Crews has become known as one of the film's best bits.

The endearing nature of his story line, alongside the inherent meme-ability of his scenes, have meant his role in the movie has had a lasting impact. Many point to him as their favorite thing about White Chicks.

In fact, White Chicks is general is still super popular.

In spite of a lukewarm critical reception, the film is not lacking in fans. Since its 2004 release, it has gained a cult following, with many still amused by the wacky, slapstick humor and insane quote-ability.

In fact, fans of the film have long had one outstanding question.

Why has there been no sequel? For a movie with such a dedicated fan following, it seems strange that no one has tried to milk the franchise for a second time around.

Especially when it seems so possible.

Marlon Wayans, one of the movie's biggest stars, has teased on TRL that he'd definitely be down for creating and starring in a White Chicks 2 last year.

In fact, he even shared a mock-up of the poster.

Wayans showed a potential poster for the movie's sequel on his Instagram, promising if it got over 300,000 likes that he'd go ahead with the film. The post currently has almost 500,000 likes, leaving fans wondering what the hold up is.

And now another of the film's stars has spoken out.

Terry Crews has exclusively revealed that he is also very keen on creating the next part of the White Chicks franchise, and is ready to go whenever he's asked.

In an interview with Us Weekly, Crews spilled the beans.

Speaking about White Chicks 2, Crews said, "I’m staying in shape for White Chicks 2.  I will never get out of shape, you know that, right? I will be seventy-five and say, ‘Here we go, I’m ready to go!’"

Crews went on to say he's deliberately making efforts to keep his role.

"I will never, ever get out of shape because that movie’s going to happen one day," he promised Us Weekly. And since he plays a pro-basketball player, we're guessing keeping up appearances is no mean feat!

Crews is undoubtedly an essential part of the sequel.

But with both Wayans and Crews on board, it doesn't seem like there's any reason that White Chicks 2 should be held up any longer!

Aside from White Chicks, Crews is most famous for his role in Brooklyn 99.

Crews's role in the police sitcom is Terry Jeffords, an intimidating figure with a heart of gold. It seems whatever his role, though, people love to watch Crews on their screens.

And it seems people are particularly excited about this latest development.

Now Crews has thrown his hat in the ring, it's made the possibility of a White Chicks sequel seem much more like a reality. People are stoked about it.

The majority of fans have had an enormously positive reaction to the news.

One Facebook commenter writes, "Yes!!! Totally love that movie. A second movie would be great." Another adds, "Come on now! I’ve been waiting a long time for this!!!! This needs to happen already!"

Although not everyone is so emphatic.

In fact, there are some out there who are not so keen on the idea of a sequel. There are a few main reasons people think White Chicks 2 may not be such a good idea.

Some are fine with the movie, but just not with Crews being involved.

Many think Crews is too talented of an actor to be in such a silly, low-brow style of comedy - although there's nothing fundamentally wrong with this style of humor, even if it isn't to one person's specific tastes.

Others are concerned about the racial element of the movie.

The fact that the two leads not only change their gender but also their race for the story is seen by many as inherently problematic. It's certainly got excellent shock value, to say the least.

Some worry about White Chicks 2 in the current political climate.

@usweekly Sure to be the subject of trump’s tweets and fox programs for weeks. Would be cool to hear explanation w… https://t.co/Tlw1rezHDb
— Que Star (@Que Star)1552913986.0

The US President, Donald Trump, is no stranger to a controversial Tweet - and many fear his response to this style of parody. There's no doubt the Wayans brothers would be subject to much public scrutiny if the movie did go ahead.

There is a climate of quick offence online nowadays, so we can't imagine this movie would have an altogether positive response from the internet.

But for some, this isn't a reason not to make a White Chicks sequel.

In fact, some think that the online reception of such a controversial movie would actually work in it's favor, boosting the notoriety of the franchise and the visibility of the film.

Some say the movie is a perfect example of comedy.

White Chicks plays off of society's views of race and gender, and so exists as a reflection of its time. By playing with something that can cause offence, it's guaranteed to get under some people's skin - but for some, that's why it's so funny.

Others think now is the perfect time for the sequel.

There's no denying that race is still a gigantic issue, both in the US and around the world. A movie like White Chicks 2, done right, could be an important catalyst into discussion that need to happen ASAP.

But for some, it's all about the laughs.

And in terms of laughs, Terry Crews is really the biggest star of the original White Chicks. So much so, that many want him to take on an even bigger role in the potential sequel.

We have to say, we're torn on whether White Chicks 2 is a good idea.

But whether it's a success of a giant disaster, you can guarantee we'll be watching - and waiting hopefully for another signature Terry Crews lipsync.