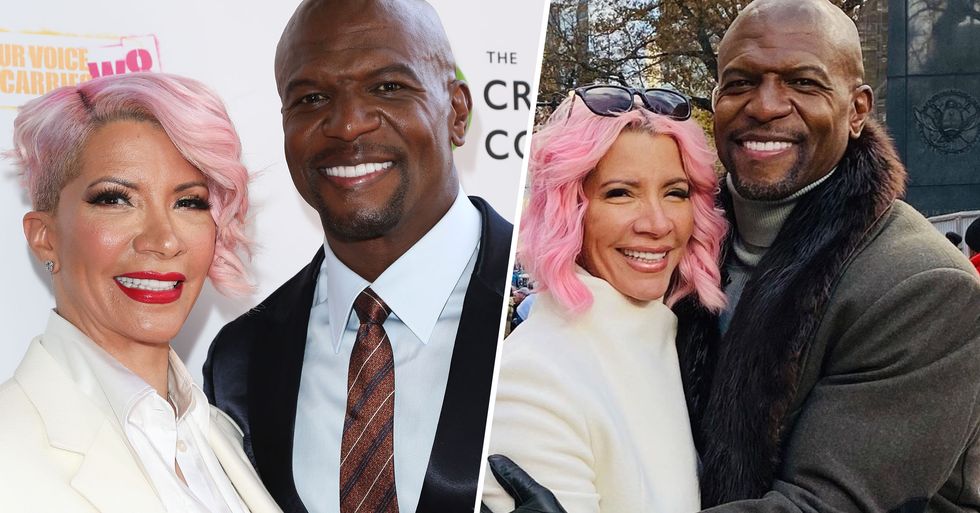 The amazing news has come in that Terry Crews' wife, Rebecca, is now 100 percent cancer-free after beating breast cancer.

Keep scrolling to learn about the family's struggle and how they've come through the other end...

The amazing news has come in that Terry Crew's wife, Rebecca King-Crews, is officially cancer-free.

She has been battling breast cancer for the last few months.

Terry Crews is one of the most iconic faces in Hollywood...

The fifty-one-year-old has a very full resume that stretches back for decades.

As a young man in the 1980s, he started out as an American football player...

He was drafted by the Los Angeles Rams in the 11th round of the 1991 NFL Draft. This career included stints with the Rams, the San Diego Chargers, the Washington Redskins, and the Philadelphia Eagles.

Crews moved to Los Angeles to pursue an acting career after having a long-standing ambition to work in the film industry.

He made several appearances in commercials and music videos...

And despite having never taken acting classes, Crews' breakout role came in Friday After Next (2002) starring rapper-turned-actor Ice Cube, for whom Crews had previously worked as on-set security.

Over the years, Crews has starred in mainly comedic roles...

His hilarious role in White Chicks (2004) rocketed him to fame and he soon became recognized as the muscley comedian that he is known and loved for today.

Alongside his acting career...

Crews is also an avid sketch artist and he advocates tirelessly for women's rights activism.

Rebecca King-Crews has been by his side for decades now, and it's safe to say that they make one of Hollywood's best couples.

They have 5 children together...

And 1 grandchild... we're all thinking it, they don't look at all old enough to be grandparents!

The couple shares a very happy life together...

But disaster struck earlier this year.

Rebecca was sadly diagnosed with breast cancer in late March of this year.

Just 2 weeks after her diagnosis, she underwent a double mastectomy for treatment - which, of course, was unbelievably difficult for the Crews family to deal with.

Nobody deserves to experience this kind of fear.

Speaking to PEOPLE, Rebecca said: "Though it was Stage 1, you're overwhelmed with fear, like cancer is this all-consuming, all-powerful evil entity. I just thought to myself, 'Okay, if they find something, Rebecca, just cut it off and reconstruct it'."

"Our world kind of came crumbling down."

But Crews was determined to stay strong for his wife during this difficult time. "Let me tell you something, my wife is a warrior, and she said ‘hey wait a minute, we’re going to fight, in fact, I’m going to get proactive and we’re going to go in and take care of this right away,'" Crews said during an interview with James Corden of The Late Late Show. "To see the courage this woman had was inspiring to me. It blew me away."

Crews took care of his wife during her recovery...

"It made me more thankful for what we have," he said. "The fact that basically the world stopped, but I got to be her nurse which was incredible, no other time would I have been able to do that."

It has been a very tough couple of months...

But the news we have all been hoping for has finally arrived!

Crews recently spoke to Extra's Billy Bush and revealed this amazing news. "She's amazing, 100 percent cancer-free, recovering so well, but I'm going to tell you, man, it was scary, brother," he said.It was really the most frightening news I've ever received... I'm the most thankful man in the world right now she's doing so well," he said.

We can only imagine his relief...

"It was really the most frightening news I've ever received... I'm the most thankful man in the world right now she's doing so well," he continued to say.

A huge congratulations to Rebecca on her all-clear result!

For more on Crews, keep scrolling to read about the time he put an entitled fan in her place after she didn't respect boundaries...