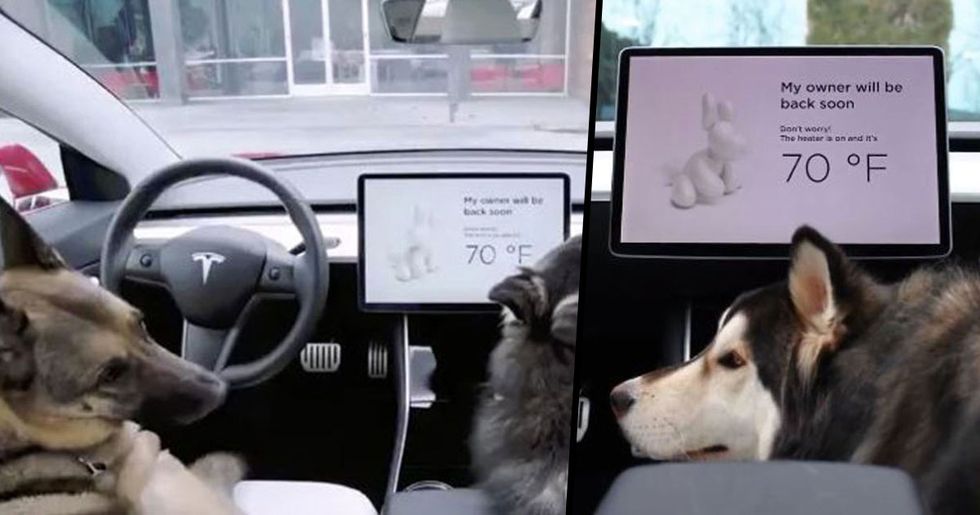 Yes, entrepreneur visionary weirdo Elon Musk's Tesla company have discovered an ingenious new way to pamper man's best friend. This comes after a long year for Tesla, and for Musk himself, who went from the extreme highs of successful space travel to the extreme lows of late night ambien riddled Twitter bouts, failed test launches and even near bankruptcy.

He's a strange man, to say the least, and we're all slightly obsessed with him - he has amazing ideas about the world while coming across quite inhuman.

Since its launch in 2003, Tesla has pioneered the science behind electric cars.

They even sent one into space

Do you remember when Space X sent Musk’s Roadster into the void of outer space? Say what you will, but it’s an incredible image.

Now they’ve had another idea

How many times have you seen a dog locked inside a car?

I think we’ve all seen this a lot. And it’s a real safety hazard for man’s best friend. People have been known to break car windows to save dogs from the portable green house.

Well, Tesla have a plan

Tesla have thought of a way round the ‘hot dog’ problem. And it’s ingenious.

Yes, and it has a screensaver!

The screensaver let’s passers-by know that you're not some kind of dog-hating monster.

Elon Musk is a colourful character, why do we like him so much?

We all seem to love Elon Musk, here’s some reasons why…

There was the time he lit one up with Joe Rogan

This was probably one of the most meme-worthy moments of the last decade.

There was the whole flamethrower thing.

As if he didn’t have enough time on his hands, Musk started helping a distributor sell Musk-approved flamethrowers.

And the Zombie thing after the flamethrower thing.

The thing with Musk is that you can never seem to tell when he’s joking.

And there was that time he was interviewed by Werner Herzog

“Right now, we can’t even get one person to Mars so -“

But it isn’t always laughs with Elon

Musk has actually been party to some pretty controversial events over the years. Here’s a look at them.

The Board of Directors once got worried about his ambien use.

People were concerned that the ambien wasn’t helping Musk sleep, but causing him to write weird things on Twitter.

And the time he called that heroic diver a ‘pedo’.

It was one of the British divers who helped save the boys trapped in cave in Thailand. Apparently they were mean about his portable submarine.

Tesla once laid off 9% of its employees.

'He said Tesla had developed redundancies in some job functions that were no longer necessary.’ That’s cold…

Remember when two different model S Teslas crashed into things at high speed while on autopilot? No? Huh?

When Azealia Banks said Musk was "scrounging for investors".

In an interview with Business Insider, Banks said that Musk had been concerned about getting financing for a potential go-private deal. "I saw him in the kitchen tucking his tail in between his legs scrounging for investors to cover his ass after that tweet…"

Single digit weeks away from 'death'

In 2018, things were so bad at Tesla that Musk said, ‘we were single digit weeks away from death.’

Fire at the Fremont Factory

The Fremont Factory caught fire in June, last year, when a baler overheated. Apparently production of Tesla was not effected.

But these are all just hitches

Musk has had some serious speed-bumps along the way, but what he’s doing, in trying to reduce emissions is really important.

Musk takes the threat of climate disaster very seriously, which is more than can be said for a lot of American public figures right now.

And he’s right, we have to hurry.

Research from NASA shows that Carbon Dioxide levels in the atmosphere are the highest they’ve been for over 600,000 years. So maybe we need Elon more than he needs us?

Besides from his views on climate change…

Besides from his views on climate change, Elon has some pretty wacky ideas about life. Here’s some of his thoughts on different things.

He reasons that we’re living in a simulation.

According to Elon, there’s a staggeringly large chance that we’re all part of a mass-simulation program from the future. Watch the video in the next slide, it’s quite convincing.

But if I’m living in a simulation, do I still need morals?

He wants to link the human brain with computers

He wants to tunnel under LA

Musk wants to create the hyper loop, a super fast tunnel-based transportation system under the city of Los Angeles.