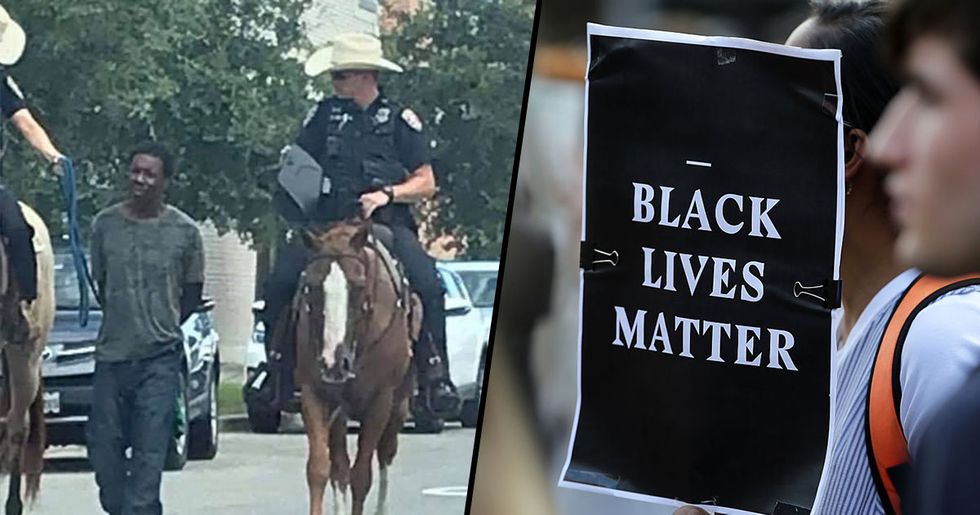 Just when you thought that the world couldn't get any worse, you find out something that truly makes you lose faith in humanity. We're still shaking from the horrific acts of terrorism in the USA this weekend, and, now, thanks to the wonders of the internet, we've witnessed a scene that looks like one of the most shameful pages in a history book. But it happened in 2019.

A man recently posted an image on Twitter that is actually difficult to look at. It showed two Texas mounted police officers walking a black man through the streets of Galveston on a rope - and, yes, the images are even more horrendous than they sound.

What will leave you extremely shocked is the fact that neither officer is going to face criminal charges for what they've done... keep reading for the full story.

It's safe to say that tensions between the black community and the police have been high in recent years.

But, recently, the internet witnessed something truly harrowing.

The incident in question took place in Galveston, a beach city in the south of Texas - and a place not known for being particularly liberal-minded.

Galveston is also famous for having mounted police.

And, this week, two members of the Galveston Police Department were seen on horseback behaving in a manner that seemed hugely archaic - and even more problematic.

The image was shared on Twitter and has truly shaken the internet up.

In it, two white mounted police officers walk an arrested black man through the streets of Galveston, attached to them via a rope.

Many believe that the motives behind the move were racist.

One Twitter user even pointed out the similarity between the badges of the original Houston Slave Patrol and the current Texas Police Department.

And others pointed out the problematic history of the police in the USA.

While they currently are supposed to operate without racial bias, the fact that they have such racist roots is pretty frightening stuff.

In it, the historical abuses of black men in America are compared (and come up horrifically close to) what's going on in Galveston today.

Others made this claim.

While, generally, participating in racial injustices is frowned upon in the USA, some believe that the police and other authority figures can get away with it far more easily.

The man in the pictures, identified as forty-three-year-old Donald Neely, is said to suffer from mental illness, and a vulnerable person should not have been treated in such an obviously problematic way.

Although not everyone sees this as wrong.

Following several warnings, Neely was arrested for criminal trespass. As the police were mounted, walking him alongside their horses was a judgment call they made.

Another shared these images.

@shaunking @galvestonpd Could it be that mounted officers simply made an arrest and are bringing him in? Happens to… https://t.co/eBIU86QROF
— hepbot (@hepbot)1565054545.0

In them, white criminals are arrested by mounted police and stay next to the horses in the same way. Although, as one Twitter user commented, "I don’t see them being walked like a dog. Good try though."

But regardless as to whether or not it's procedure ...

It does seem like the police should have known that there's no way that this would have looked good - and they could have stayed and waited with him until a car came.

And one woman took it a step further.

She viewed the entire act as symbolic of how the Galveston Police Department feel about black people.

And it seems like the police department agree that it wasn't acceptable.

As they've now released a statement claiming that the officers' actions were wrong, saying that they "showed poor judgement" in their actions. You're telling us.

For a city with a potentially racially insensitive reputation, this really wasn't a good look for Galveston police.

Another user posted this image.

The El Paso shooter, who had not just criminally trespassed, but murdered more than twenty people in an act of racially motivated violent terrorism, was taken quite peacefully by police. What?!

Many think that the apology is not enough.

There have been many calls from the public for further action to be taken against these police officers - not only to punish them for their actions, but to hopefully prevent such horrifying incidents happening in the future.

We'll let this speak for itself. Lack of judgment - or something more insidious?

And, naturally, the comments left on the post weren't very positive.

@GSTEPHENC @shaunking @galvestonpd They're probably asking the #WhiteTerrorist if he takes cream and or sugar with his Starbucks.
— Jeffrey Harrell (@Jeffrey Harrell)1565085954.0

It seems to be a growing trend. White folks seem to be getting special treatment, especially by the police. Those who are supposed to be protecting everyone in society are picking and choosing based on their racial preference. Terrific(!)

And now there's been a shocking update on the story.

Two weeks after the initial incident took place, we now have an update on the investigation. A faction of the state's public safety department has deemed the treatment of the so-called "criminal" "unworthy of criminal investigation."

The Texas Ranger Division was one of the two agencies that came to this decision.

According to The Washington Post, they were created to "hold investigative jurisdiction over a plethora of major law enforcement operations in the state, including officer-involved shootings, major crime events, and public integrity investigations."

But it seems like yet another injustice is going to go unpunished.

Are we really surprised that the whities aren't going to be punished? Not really. But that doesn't mean that all of us aren't mad about it.

The officers were even allowed to return to work a few days after the incident!

The President of the Galveston Municipal Police Association said that the two white officers resorted to using the norms of police on horseback and were both "race and gender-neutral" while doing so.

Who "accepts" this treatment?

Let me know, because I've never heard anyone say that these are "the norms" of police on horseback. Dragging man on a rope through the streets. To me, it seems like they were trying to publicly humiliate him.

Regardless of "training," Neely's brother believed that what they did to his brother was "inhumane." Andy Neely told KPRC: "They treated my brother as if he was a dog."

After commenting on Donald's mental health status, she admitted that she did not think that they would find the officer's guilty. However, she still continues to fight for the case, saying that the release of their body-cameras will hold all the information they need.

She said that she believes that it will show the officers “knew the imagery was troubling."

And she also raised a good point, asking for evidence which states that the officers were in the right arresting Neely using such methods. So far, none of the department's policies have been released. She does not believe that this policy even exists, especially not in writing.

But, for now, it looks like the officers are going to get away with it.

If you want to learn more about the pernicious power of institutional racism, check out this viral Twitter thread below... it really does bring to attention the race flaws within our system.