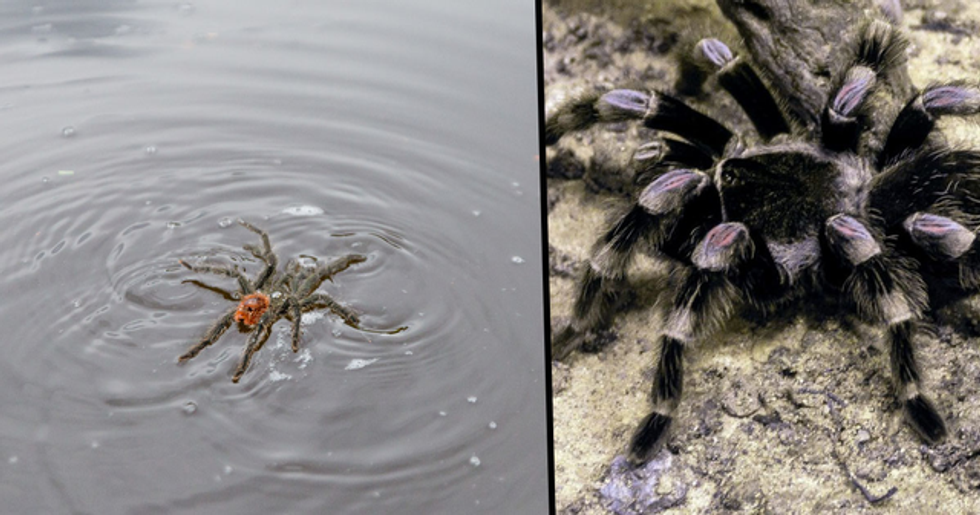 Read on to find out about the most recent monstrosity in the spider world.

The worldwide phobia of spiders...

Spiders are the unfortunate animal that people seem to fear the most. The arachnids have generated an irrational fear amongst millions, and its not quite known as to why this is.

Arachnophobia is very much real...

Arachnophobia is the phobia of any species of spider, whether that's a money spider found scuttling around on the sleeve of your sweater or a huntsman rampaging its way through the outback of Australia.

And the bigger the spider...

The tarantula is one of the biggest species of spider.

This large and very hairy species of spider can differ in size, ranging from the size of a fingernail to the size of a dinner plate.

Forty different species of tarantula are found in the US.

Tarantulas usually reside in forested areas, mainly in tree trunks. The ones that are found in the US reside either in warm deserts in the south-west or are found living on the ground rather than in tree trunks.

Our hairy friends have a varied diet...

Tarantulas eat small critters such as beetles, grasshoppers, woodlice, moths, and other species of spiders. Larger tarantulas have been known to eat larger prey, such as small snakes, lizards, mice, frogs, and small birds.

Despite the millions of arachnophobes out there...

Tarantulas have proven to be a popular household pet. When kept in the correct environment, tarantulas can make fairly pleasant pets due to their gentle temperaments. They're not social animals, though; they must always be kept alone.

And there are many out there who love the eight-legged beasts...

Some folk are super passionate about spiders, and keep many different species as pets. I think I'll just stick to having a pet cat, thanks...

Never the less, tarantulas aren't the most lovable of pets.

I highly doubt that a tarantula will ever overtake the dog in the "best pet competition..."

So how about we just forget about these hairy creatures for now?

Let's just leave the tarantulas to it in their forests and tree trunks; they won't bother us and we won't bother them.

The tarantulas think not...

Turns out, we're not that lucky; we can't just avoid these creatures as you may think we can.

A tarantula was recently spotted in Texas...

And what it was doing there was completely out of the ordinary.

So it turns out, tarantulas can swim.

You heard that right. They can swim.

Looks like it's no longer safe to go into the water...

Forget Jaws, the swimming tarantula is in town! This footage was captured last year at a state park in Texas, and it's literally sending shivers down my spine as I write this.

This (not-so) little guy has done this before...

From watching the video (watch it down below!), it's clear that this tarantula is no stranger to the water.

The spider uses its legs as paddles...

Spiders, including the chunkier species of tarantula, are more than capable of swimming, it turns out! They use their eight legs as paddles, which easily keeps them afloat.

People are not happy about this recent discovery...

The internet is currently losing its mind over the swimming critters, and people are doing what they do best: ranting about it on Twitter.

Even for those who aren't afraid of spiders...

People just aren't digging the thought of being interrupted on their relaxing swim by a huge tarantula - who, by the way, is probably swimming faster than us.

Our worst nightmares are now a reality.

What is it about things in the sea being absolutely terrifying? There's nothing worse than the feeling of something brushing against your foot, and now the chances of that being a spider have just increased. I think I'd much rather encounter a great white shark...

Despite the thought of bumping into a tarantula on a leisurely swim being absolutely horrifying, these furry little critters pose no threat at all to us humans. But, unless you're willing to take the chance of encountering one of our eight-legged friends, maybe its best to stay out of the water this summer... And if you thought that swimming spiders were scary, what do you think about a tarantula devouring a whole possum?