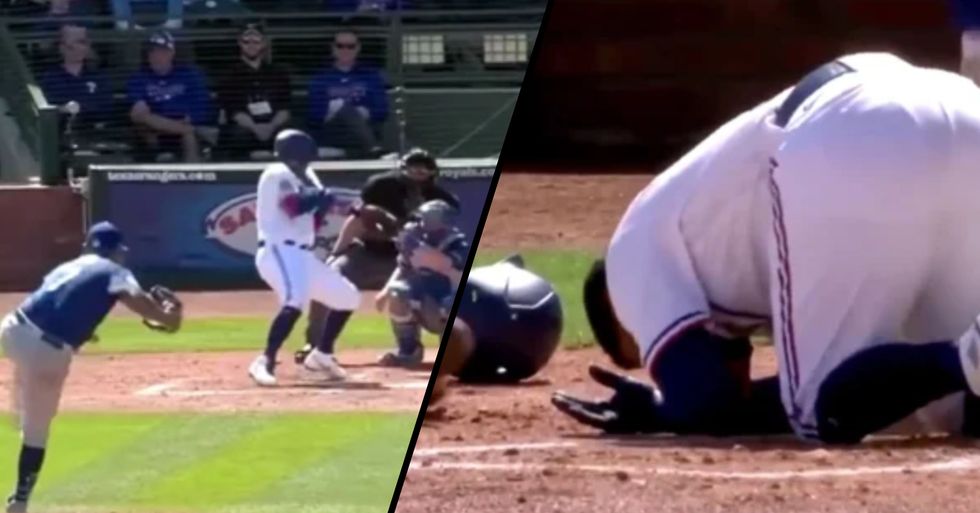 Being involved in competitive sports always comes with its risks. One of the riskiest sports has to be baseball. With pitches traveling at close to 160 kilometers per hour, it becomes a deadly game when things go wrong.

One Texas Rangers player was involved in an accident that left him hospitalized after he failed to get his hands up on time after a fastball hit him in the face. The injuries he sustained were horrific.

Before I begin, I must warn you that this article will be discussing some graphic content involving serious and life-threatening injuries. Please read at your own risk.

Baseball is cemented within national tradition.

We play it as children, watch the game as adults and then pass it down to the next generation.

It is often referred to as "America's National Pastime."

Throughout history, it continues to reflect aspects of our society including social movements and technology.

The sport brings us together.

It allows us to build our pride as a nation and become one.

So, it's important to carry on our love for the sport.

From helping young sportsmen get their foot into the door to honoring the members that came before, the sport will continue to bring the same feeling of togetherness it always has.

However, no sport comes without risks.

And from what we've seen on and off the field, it only takes seconds for a moment of bliss to become a moment of worry.

Baseball injuries are amongst the worst we've ever seen.

Because of how competitive the sport is and the lack of protective gear for players, we've seen some pretty nasty sights, especially in the Major League.

Remember when Mike Cameron and Carlos Beltran had that collision?

2 players in the New York Mets had one of the nastiest crashes we've ever had to witness, with Cameron coming out the worst.

The accident happened while both men were trying to catch a fly ball.

They were left injured but Cameron had to be carried out on a stretcher after sustaining multiple facial fractures. Thankfully, they both recovered and continued their careers in the professional league.

And remember when Tony Saunders' arm snapped on the field?

The young player threw a hard pitch and immediately his arm snapped and he fell to the ground screaming in pain.

At the time, he was considered an upcoming talent in the sport.

However, even though he recovered, just a year later, he broke the same arm and was forced to retire before he even hit thirty.

And back in 1920, this deadly fastball ended the life of Ray Chapman.

During a game against the New York Yankees, Chapman was hit in the head with a fastball.

However, this wasn't just a regular fastball...

It was so powerful that it shattered his skull and cut through parts of his brain, which ultimately meant he couldn't survive the injury. He passed away the very next morning as his body slowly gave up on him.

This is why fastballs are a dangerous part of the game.

In a similar incident, a recent event saw Texas Rangers player, Willie Calhoun, hit directly in the face with a wild ball.

It was traveling at 152 KPH hour when it struck him.

On Sunday, the team took on Los Angeles Dodgers when Julio Urias threw a pitch that injured the batter.

Calhoun fell to the ground where he remained there for several minutes.

In the video, which you can find if you keep scrolling, the ball strikes the batter and as he falls in pain, the catcher jumps forward to check on the player.

Joey Gallo, who also plays for the Texas Rangers, recalled the horrific events...

He told the Fort Worth Star: "He didn’t really say anything. He didn’t answer. He was definitely moaning and his mouth was really hurting. I think he was hearing [us] but he really couldn’t get anything out."

"It’s tough because I’m really really close with Willie. He’s one of my best friends, so to see that happen and him go down like that, it was really, really tough to see that. I just tried to be there for him and make sure he knew we were all around him and trying to help him and just praying that he’s OK."

A CT scan had confirmed that Calhoun had suffered a fractured jaw.

The batter was driven to St. Joseph’s Hospital where multiple tests were run in order to determine the outcome of the fastball and it was heartbreaking for his coaches to hear that he had in fact knocked his jaw out of place.

His coaches went to the hospital with him.

Coach Don Wakamatsu continued to manage the game as the official manager and general manager assisted their player.

However, the pitcher, Urias was also suffering during the game.

He said he didn't feel like himself and was devastated about what had happened out on the field even though injuries like this can happen to anyone.

"I really had a hard time and I didn’t feel like myself out there. I’ve never been in a situation like that."

"Unfortunately, what happened, happened. I pray he’s OK. After the second inning, I kept praying for him. He was in my thoughts. I went out for the third inning and I have to continue my job. I trust in God, put it in the hands of God and go out and focus on pitching."

Calhoun is said to be undergoing more tests.

Here's the full video of the moment:

If you're looking for more sporting news, then keep scrolling.