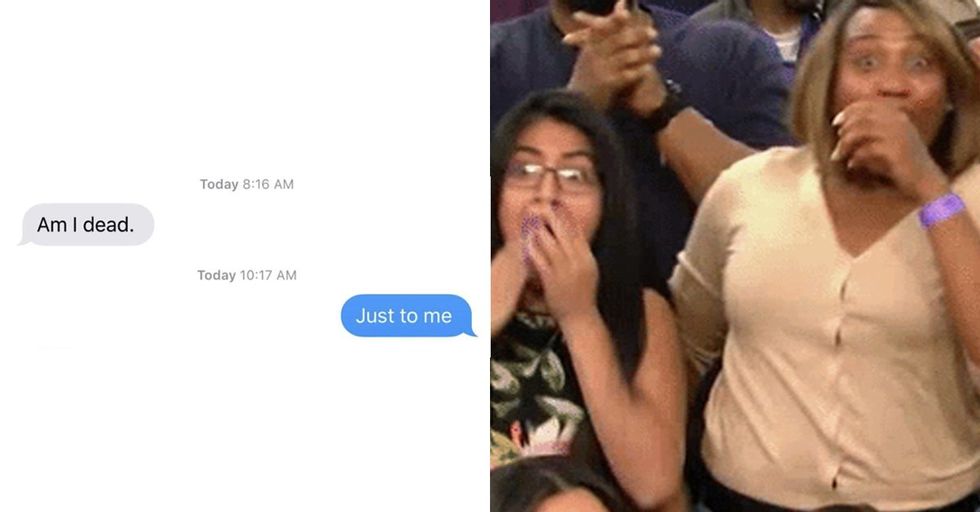 These Texts From Exes Belong in the Clapback Hall of Fame

Breakups can be pretty darn brutal. Even the most amicable split can be accompanied by feelings of sadness, regret, or even anger– and the worst breakups come with a hefty helping of all three.

Back in the days before texting or social media, you could break up with someone and never see them again for the rest of your life. It was so easy!

Now, though, breaking up with someone isn't always so cut and dry. You might still text your ex, or they might watch your Instagram stories. Do you unfriend them on Facebook? Block them on Snapchat? What if you come across them on Tinder? Relationships in this modern age are kind of a minefield.

In the event that you do decide to text your ex, it can go any number of ways. Most of those ways are bad. If you ever find yourself with a message from your ex in your inbox, we recommend you take inspiration from these incredible responses!

You can stop treating people badly. It's that easy.

You know. In case you were wondering why I ghosted you. It's because I am now a ghost.

Weird that I'm the first person you think of when you somehow have a duck to give away, but OK! I will take it! I love ducks!

Hey, you asked. After this, I'm going to stick a few pins in a voodoo doll, too.

"I heard The Witcher was super sick."

You have to be pretty oblivious to ask for something like Netflix deets out of the blue. But to ask for them from an ex? You think this lack of self-awareness had anything to do with the breakup?

Should not have gone out with Paul Revere.

"Hear ye hear ye"? What kind of opener is that? You're not a town crier, and you didn't date the gathered people of Lexington, Massachusetts.

Most people thinking about getting back together have one condition that has to be met, and it's not evidence their former squeeze has changed, or an open assessment of the issues in the previous relationship. No, they're looking for an overt insult. Oh, to be called a baby by someone you've broken up with! *eyes turn into hearts*

It was a pretty good show.

As much as every '90s kid was invested in the Corey-Topanga saga, they certainly don't use it as a benchmark against which to compare their real life relationships. Now, Sean and Angela? That was a couple we can all aspire to be.

My man used his best opening, and he got played. Although, if these people have dated before, you'd think he'd know this would be her response, since she makes her living as a teacher/ pediatric nurse/ party clown.

To really grasp how sad this text is, you have to imagine the act of planning this text. This dude surely used a bulletin board and different colored string to map out all the different letters and responses he needed to have at the ready.

You gotta get yours.

Listen, if you have to put up with sad-sack boys texting yo out of the blue, you might as well get some Netflix deets out of it. This guy better have the HD plan.

Hey, you can't blame her. This is a solid question. Ruining someone else's life is my go-to way to get over an ex. It works!

Avengers assemble... or whatever...

Tony Stark has fought off invading aliens, created AI programs that can solve a litany of humanity's troubles, and snapped away Thanos and his destructive minions. But his greatest contribution to the world? This eye roll gif.

In some UFC fights, the bell rings, the fighters touch gloves, and then one lands a knockout punch that immediately renders the other unconscious. The first guy doesn't even break a sweat. This text is like that.

This one actually makes me kind of sad. The dude knows he's trash, so he takes his shot, gets rejected, and then goes "yup, that's about right."

My man really stepped in it.

Again with the lack of self-awareness? Who are these guys? This guy clearly thought that whatever slime-ball move he pulled that made her hate him so much was such a non-issue that he could casually ask about her job. Yikes.

There is no lower form of communication than mass emails from companies. And then to be called a mass email? It's almost too low a blow.

When someone smacks down their ex over text, there's one style of reply that is always always my favorite: the attempt to take the high road. The fact that these guys think the person they've hurt has any obligation to be kind to them when they lazily reach out shocks me every time.

Nothing puts someone at ease more than saying, "Hey, you know that really annoying thing I do? Well, I'm not going to do it." Because then she knows... you're definitely going to do it.

If at first you don't succeed...

My man not only went for the most boring reach-out text possible... ... but he doubled-down on it. This guy truly believes in the power of "Hi."

The holidays are a perilous time for anyone with a depressing, not-yet-over-you ex. Their requests to hook up will come in many veiled forms. Those who have moved on have to stay vigilant.

Listen, there is nothing more brutal than the "haha" tapback. It shows that the person receiving your text is not only laughing at you, but they care so little about you they're not even taking the time to type it out themselves. Imagine getting one "haha" tapback and literally ever reaching out to that person again.

Not all ex-texts are bad.

Sometimes, even though the relationship wasn't meant to be, people maintain their physical connections. But I've got to assume this is just someone trying to get some Netflix deets.

Ask the Eight Ball at your own peril.

I like to think this guy thought the girl was actually giving his offer enough consideration to ask her Magic Eight Ball. But then, in this overly optimistic version of the story, this guy realized it was an animated still from The Simpsons. That must've been crushing.

You called it, chief.

Nothing like sending self-defeating aphorisms over text. Girls love that. They told me. All of them.

Chrissy Tiegen gets it.

This is an expertly deployed image, of course. But the most striking part of this text? The attempt from the dude to laugh it off with an "lmao". That truly bummed me out.

Uh, yeah. She definitely misread your text. We know you were in no way trying to hook up again. Because the kind of guy who would reach out to their ex out-of-the-blue and pretend nothing was wrong would never do that.

In the entire history of human civilization, has a more depressing "ok np" ever been texted? I consulted a world history expert who has multiple PhDs and she said "absolutely not."

Well, the blocks start comin' and they don't stop comin'...

Either this guy has access to multiple phone numbers or he worked super hard to find a way around them to send this text. And you can see why — it is such an important text, with so much relevant content. Not sure how this girl would've lived without this information.

While we're both hoping for things...

See, these texts blow my mind! Why would you send a nice text like this when the other person clearly hates you?! Read the room, everyone!

Get the doctor in here.

In all my days, I've never seen a more devastating text. The only thing those bubbles could indicate is that this man's buddy found him lying face down and picked up his phone to let whoever killed him know that the police would be arriving soon.

Oh man, those tap backs are so upsetting. Really, guy? You love that she has a boyfriend? I can't imagine you do. I just can't.

So this guy is the type to a) say "gello" instead of "hello" and b) send cat memes. Any thoughts about why she might've broken up with him in the first place?

I don't know where this person found that magnetic poetry, but I'm going to need my own set ASAP. You never know when it might come in handy.

Sure, you could just eat the food on your plate. But where is the fun in that?

The No. 1 rule of texting your ex: Never type up a response when a GIF will do quite nicely. They're probably not worth the effort.

Break up with someone and then try to get them to do your homework?! That's a pretty bold move, my dude. I don't see it working out very well for you.

This response is so brutal that I'm feeling embarrassed, and I had literally nothing to do with the interaction. Oof. There's no coming back from that one.

Ooh, I totally would get back together with you, except I have one million reasons why that would be the most terrible idea in the world. Maybe next time! (But probably not.)

Imagine feeling comfortable enough to text someone you haven't dated for at least three years. At 2:54 in the dang morning!

Oh, what time were you thinking? Actually, it doesn't matter. The answer is no, never, not in one million years.

Oh, you said don't roll my eyes. I must have misunderstood. What are you going to do about it? Break up with me?

I was in the shower. For a month. Anyway, what is it that you wanted?

Yep! I even changed your photo to something a bit more appropriate.

Not sure what's so hard to understand about that. I guess you should stop texting it.

That should clear things up. Maybe you should save that picture to your phone and look at it every time you feel the need to text me.

Ooof. Another brutal response. Although I am very curious about why the ex-partner was asking whether they were dead.

Short, simple, and straight to the point. Be like this person.

I just want to make sure you noticed that I blocked you on Facebook as well. Right before I also block your number.

You walked straight into that one, my friend. But you can walk straight outta my life!

Of course, the ex-partner asks if they're still single. Incredible. Amazing. That's really something.

There's a reason you haven't seen me. We broke up. That's how that works.

I'm gonna be busy forever, actually. Have a nice life! Or a bad one! I do not care!

You seem to have a hard time grasping the concept of a breakup. Let me clear things up for you.

Sending a GIF is one thing. Sending an emoji? The same one? Over and over again? That's just amazing.

Weird how that works.

I'm also really happy, have a full social calendar, am saving more money than ever before, and I don't feel like I have an albatross around my neck at all times. Weird!

Did they need to include the "boom roasted" at the end there? No. But I am very glad they did. Share this with someone who's going through a tough breakup. This will make them feel better!