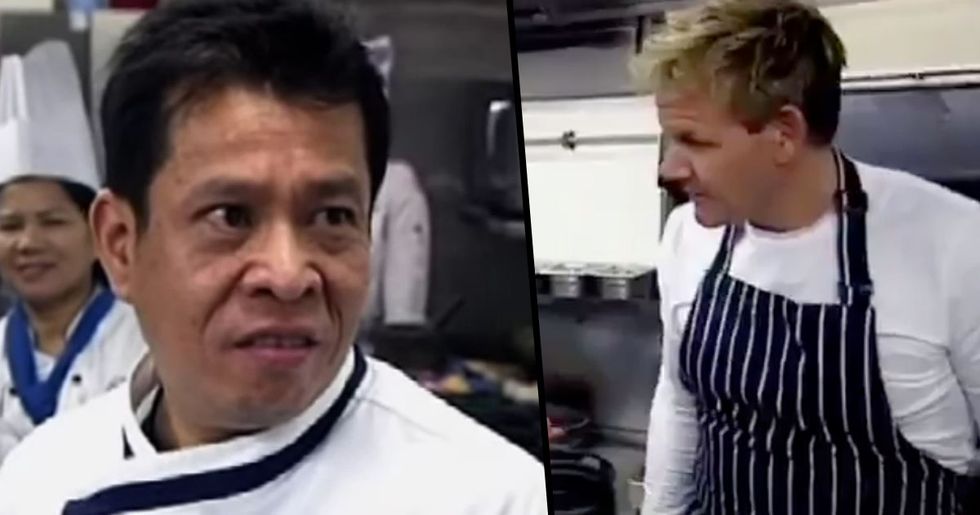 Gordon Ramsay is known to be one of the most critical chefs to ever grace the planet.

He seems to take pleasure from shouting at people; there must be something about watching grown adults cry that brings this man joy.

From his tweets roasting people's homemade dishes to his use of colorful language in Hell's Kitchen, we can't deny that Ramsay has a mean streak.

But he may have had his work cut out for him with this one particular chef...

Here's Gordon Ramsay doing what he does best: yelling.

Ramsay's antics on Twitter have been growing in popularity; his savage comments about people's food have become a trending topic on the platform. Users tweet a photo of their best (or worst) dishes and tweet them to him in hopes of receiving a positive review. Spoiler alert! Most of the time, they are not positive.

Here's one of the many reviews.

One person on Twitter decided that she could handle a review from the critical chef, so she bravely tweeted about her sister's bacon. The outcome was just as bad as the quality of the photo. I mean, what more can you expect when you present Gordon Ramsay with burnt bacon scattered on a white, polystyrene plate? It isn't going to look great, is it? Ramsay's reply was highly insulting, but I'm sure that Sarah appreciated his little play on words.

Here's one more for good measure.

Ramsay decided that he didn't like the look of one patient's hospital food and, if we're being honest, neither do we! What I can only assume was a very bad attempt at an omelette, was described by the user as "intestinal matter". Sounds delicious. Ramsey went for a more charming reply this time, saying that "it needs to be put down!". Maybe we'll just stay away from hospital food... Here's a look at a more appealing meal!

Pad Thai: a delicious blend of sweet and salty flavors.

This dish is considered Thailand's national dish. The name originates from a Chinese dialect, which literally means "stir-fry rice noodles," in Thai style, of course. You would expect an experienced chef like Gordon Ramsay to know how to make such a popular dish, but apparently, he doesn't! Not all that well, anyway...

Let's take a look at the legend that absolutely dismantled Ramsay's Pad Thai.

Chef Chang, a renowned Thai chef, was watching over Ramsay as he prepared Thailand's national dish for some monks. You can probably tell, he doesn't look very happy, but you wouldn't believe what he actually said!

Here's the full clip that had the whole of the internet in fits laughter.

Did you cringe, too? It was all going so well at the start. Ramsay and Chang were both joking around about how low the ceiling was in the kitchen. You would think they were buddies, but it all changed when Ramsay presented his Pad Thai to Chang so that he could have a taste.

We couldn't believe it either.

Being such an experienced chef, you would think that Ramsay understands the basics of the dish he's cooking, but according to Chef Chang, he did not. The funniest part is probably the confusion on Ramsay's face as he stares at Chang's disapproving look. The Thai chef then proceeds to tell him about all the things wrong with the dish. "This is not Pad Thai." Ouch.

The shoe is now on the other foot.

I’ll leave you with this legendary response to arrogant Gordon Ramsay thinking he can cook Pad Thai better than a T… https://t.co/f5LO6oyYAw
— marcus (@marcus)1555242915.0

Users took to Twitter to comment on the little altercation between the two chefs. It was about time that Gordon Ramsay had a taste of his own medicine! The GIF of Chef Chang's snarl became a viral reaction that we won't ever get over.

Maybe Ramsay should just stick to cooking the things that he knows well, like a good ol' beef Wellington!

Can't go wrong with a classic, can you?

And as for Chef Chang...

From the bottom of our hearts, thank you for one of the most awkward, yet funniest, clips to ever be uploaded to the internet. We appreciate it.