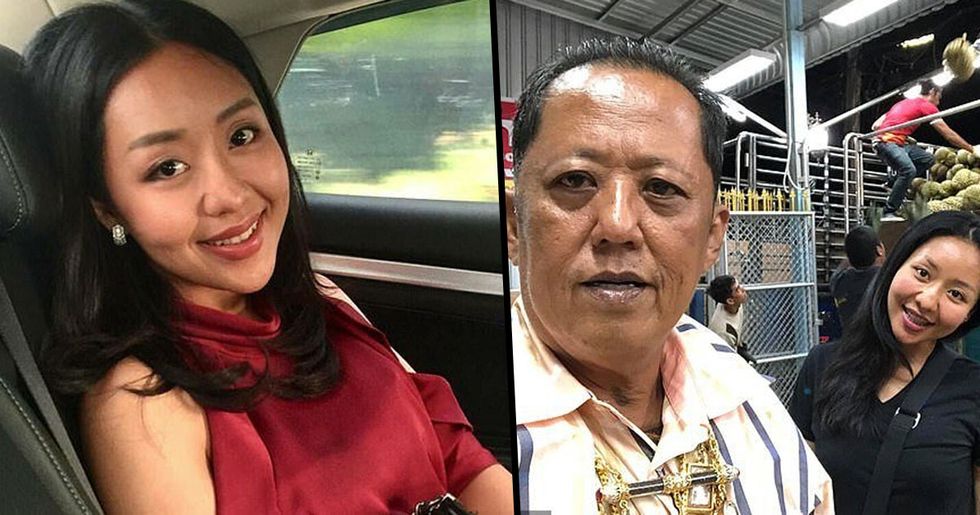 We can all imagine the feeling - wanting our children to find someone special, someone that makes them happy when we no longer can. But this man from Thailand may have taken things a bit far.

Arnon Rodthong, 58, is the owner of a thriving durian farm (those stinky fruits you see in Market stalls and contemplate buying for a friend as a joke), and he’s taken his daughter’s potential relationships into his own hands. Recently, Rodthong posted ad on social media, offering suitors of his daughter 10 million Thai Baht ($300,000) to take his daughter’s hand in marriage. The ad also specifies that the recipient of the ‘reward’ will also be gifted control of his durian farm after he dies.

I subscribe - as I’m sure many of you do - to the view that one should tell their children they’d be best served by following their ‘heart’. Choosing a future for themselves and settling for whoever they want to settle for.

Rodthong is willing to give up all his material assets to help his daughter, Karnsita Rodthong, find a good husband. Listen to the pitch.

In the ad he noted that…

Karnsita speaks English and Chinese fluently, is a virgin and has never had a boyfriend… Yeah…

He’s committed to this

In Thailand men are expected to put down a large dowry for future wives - but Arnon is willing to waive all this. Isn’t that nice…

But hold on a second - he doesn’t want just anyone

Rodthong isn’t open to just anyone applying - he has clear criteria for applicants.

He doesn’t want a philosopher

"I want someone to take care of my business and make it last. I don't want a person with a bachelor's, or master's or philosopher's degree."

He also said that he wants diligence

"I want a diligent man. I just want someone with a hard-working attitude. That's all."

Hard working enough to reply to ad for a husband that they found on the internet - that sort of hard working.

Doesn’t he have sons?

Yes, he does (not that I think that should make much of difference), and he’s bypassing them for an in-law. Ouch. That’s not going to be much fun round the Christmas table.

So how does his daughter feel about this?

The daughter in question, Karnsita Rodthong, wasn’t as upset as you might have thought she was after finding out her father had marketed her online.

She was a bit ‘surprised’

"I first found out about my father's post when my friend's showed me. I was surprised but I can see the funny side to it, too."

I suppose this love of ‘diligence’ runs in the family

"It is true that I am still single. If I have to get married with someone, I only want him to be a diligent and good person who loves his family."

This isn’t going to be easy

It turns out Karnsita wants the money from her father too. Specifically, she wants to use it to go to Korea for plastic surgery.

How many offers has she got?

She won’t say. But apparently she’s been inundated with appeals.

Thailand has a culture of commodifying marriage

We’ve all heard of Thai brides marketing themselves to western men. It’s not exactly the same in this case. But the culture of commodifying marriage certainly runs under the story.

Since the early 1900s, young Thai women have been marketed to western men - usually by their family, in search of a more prosperous life.

Many of these women are known as ‘Mail Order Brides’, the practice of listing yourself in catalogs to be selected by men.

It’s not just common in Thailand

Thailand is the most famous for the practice, but it’s also common in former Soviet countries and Latin America.

The practice began as far back as the 1800s

It emerged in America, with frontier Asian workers and American men.

But the International Marriage Agency, only truly began in the last few decades, and has exploded with the birth of the internet.

The largest Thai bride online site in the world is truly bizarre.

But this story runs slightly against the grain

The Rodthongs are something of an anomaly in this regard, seeing as they already have lots of money.

Often, Thai women are married off to wealthier westerners

Some sterling documentary work by the BBC’s own Louis Theroux led to this slightly harrowing light on the reality of Thai dating services.

So what does the internet say about all this?

Well the comment section has actually lit up with responses.

I have no idea where one would apply. I think Rodthong wants people to DM him.

And some God-fearing applicants

Why can nobody online string a proper sentence together?