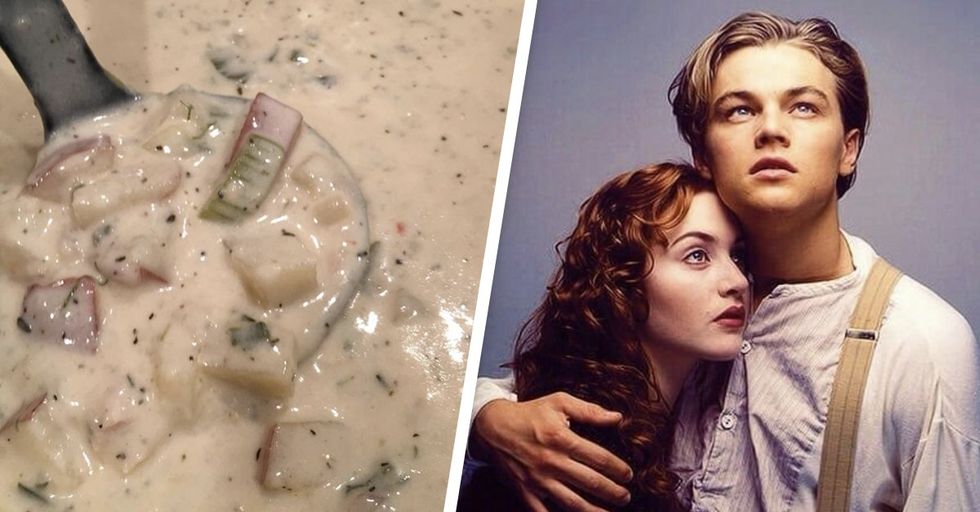 The day: August 8, 1996. The place: on the set of the movie Titanic with the cast and crew filming in Nova Scotia. The chowder: poison.

This is not the plot of a detective movie; it's a real thing that happened to the cast and crew while they were filming the movie Titanic. Yes, that Titanic: the worldwide sensation that broke box office records everywhere. The one that brought floppy-haired Leonardo DiCaprio into our homes after he won an ill-fated game of cards, made Kate Winslet a star, and gave us the sweet, sweet flute melodies of "My Heart Will Go On," which played incessantly in every elevator for the next five to eight years, whether we liked it or not. But we did. Oh, how we did.

This is an entirely accurate and insane story. Ok, the chowder wasn't poison, exactly (nobody died, don't worry), but it was laced with drugs. PCP, to be exact. And the story gets weirder and weirder from there. Why don't we talk about this crazy event more? Well, we are about to.

Ok, so first the details, because this story is so weird, we need to nail some things down.

The Titanic crew was in Nova Scotia, filming the scenes set in present-day. (The ones where Old Rose tells the story of what happened on the Titanic.)

They were just about to wrap up filming before moving to Mexico.

There they would film the flashback scenes on a scale model of the Titanic.

Just a little side-note here, that means when you see Jack looking like this in the movie:

All freezing and hanging on to the side of a door in the Atlantic Ocean...

All piña coladas and soaking up the Mexican sun. (Ok, they probably also worked really hard, but you know there were some piña coladas.)

Back to Nova Scotia. That night the crew did what anyone would do in Canada: have a chowder party.

According to the crew, the chowder served when they broke for dinner was amazing and people were going back for second bowls.

But that's when disaster struck.

The chowder was not what it seemed.

After the crew dug into their seafood dinner, they noticed they started to feel kind of weird.

According to an interview with one of the crew members in Vice, people started having a hard time getting stuff done.

At first, they thought they must have all gotten food poisoning from the chowder.

But they didn't feel sick so much as very high.

Just for the record, Kate Winslet and Leonardo DiCaprio did not eat the drug chowder.

They weren't there for the Canada filming.

But you know who was?

Allegedly, Cameron made himself throw up after feeling the effects of the chowder.

Although this hasn't been confirmed.

Once the crew realized there was a problem, they all went to the hospital.

Yes, all of them. Or at least all of them that had eaten the chowder, which was about 50 people.

According to a member of the crew, the hospital was nuts.

Everyone was super high off the chowder, and nobody could stay still.

The crew was put into separate hospital rooms but kept leaving their rooms to hang out with each other.

Apparently, it was complete chaos, because the crew was so high.

Allegedly there was a conga line that took place in the hospital.

People were racing wheelchairs around the hospital hallways.

Basically, it was exactly what you would expect if 50 people all got high and went to a hospital at the same time.

But why had the chowder gotten them high?

I mean, seafood isn't exactly a hallucinogen. Nobody goes around peddling mussels along with their LSD.

After some testing, it was revealed that the chowder had been laced with PCP.

PCP, or Phencyclidine, is commonly called angel dust. It's a hallucinogenic drug that can cause an intense high, an "out of body" feeling, and irrational behavior. (Like a hospital conga line, maybe?)

But the real question was why was there PCP in the craft services chowder?

Who put it there?

According to the Titanic crew, it's still a mystery.

Nobody knows who the spiker was.

Although some people do have some guesses.

Apparently, a crew member was fired the day before because they were causing trouble with the catering staff.

Some people guessed maybe the crew member who was fired, laced the chowder with PCP so the catering staff would get fired.

Which they did. So apparently it worked.

I guess somebody had to take the blame.

Maybe one of their chefs just spilled the tub of PCP they keep next to the stove into the chowder?

Other people on the crew suspect it was a prank by one of the crew members.

But that's a terrifying prank?!?!

The Halifax Police Department even investigated the incident for two and a half years.

But were never able to find any answers.

We may never know what happened.

But luckily, everyone was okay.

Everyone rode out their high in the hospital and there were no complications.

The hospital gave them all a charcoal drink to clear out their systems.

The crew went back to work and finished filming the rest of the movie without incident.

And went on to win Best Picture! So apparently even drug chowder couldn't stop Titanic (different story for icebergs, though).

But we will always have the Titanic Chowder Incident: one of the weirdest things to ever happen in Hollywood.

I hope Old Rose was part of the conga line.

Of this spoonful of PCP-laced chowder.