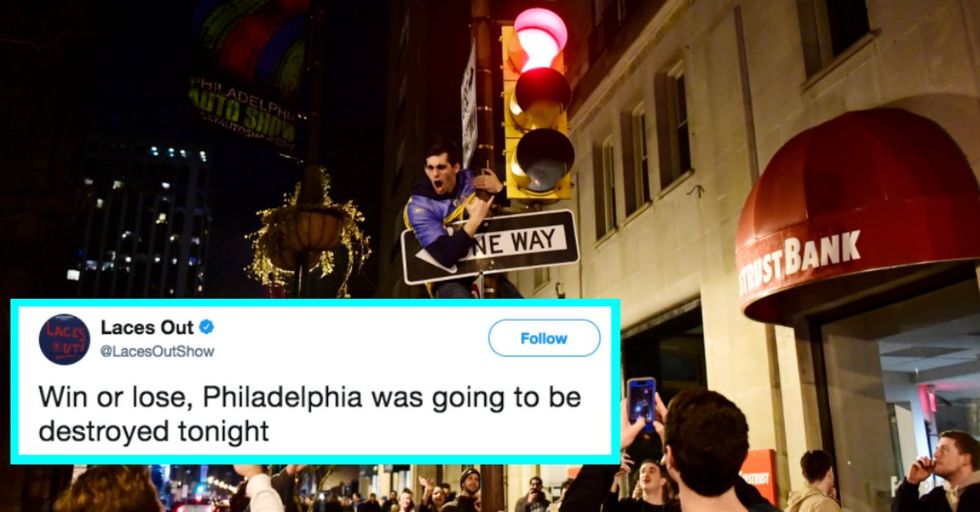 Folks, the Philadelphia Eagles won the Super Bowl for the first time ever last night. That's a big deal.

And they beat Tom Brady and the evil Patriots. That's possibly an even bigger deal!

Philly is a historical city known for icons such as the Liberty Bell, Rocky Balboa, and the cheesesteak. So you know these people know how to party. And party they did, all over the streets, doing crazy things, in celebration of their first NFL championship in franchise history.

As a generally peaceful, lazy person, I have a hard time understanding what it takes for a person to think it's a fun, good idea to stand in a crowd and violate someone else's property. But these Philly kids seem to all be on the same page, so bully for them!

Now this is a good bit of fun! Still, I can't help but be worried for the people in the apartments surrounding these fine folks who have an early morning tomorrow...

Another Thing on Fire

Ah yes, the classic February ritual of burning a Christmas tree in the street, dancing around it, and disparaging Tom Brady. This is what undoes the six more weeks of winter that grumpy groundhog predicted.

Maybe you saw the title of this slide and read the text of the tweet and were still like, "There's no way a Philly fan ate horse poop off the ground just because he was happy the Eagles won the Super Bowl." You'd be wrong, my friend. Very wrong. But we haven't even gotten to the craziest celebration yet...

Here's a thing that you and I already knew that the people of Philadelphia learned very quickly last night: Lamp posts weren't meant to be stood on and shaken around. Who'd a thunk?

What could go wrong when 30 people climb up on a piece of fabric covering some flimsy metal bars?! Obviously nothing! Obviously, everything will be A-OK!

A Respectful Line at Modell's

The line at the Modells in Cheltenham stretches from front to back of store. People keep breaking out in the Eagles… https://t.co/13EoxcLB8e
— Tamala Edwards (@Tamala Edwards)1517803235.0

An Engagement for the Ages

Sports Illustrated pointed out that this woman got engaged in the middle of a Philadelphia street "WHILE HOLDING A 40." And you know what? She wouldn't have it any other way.