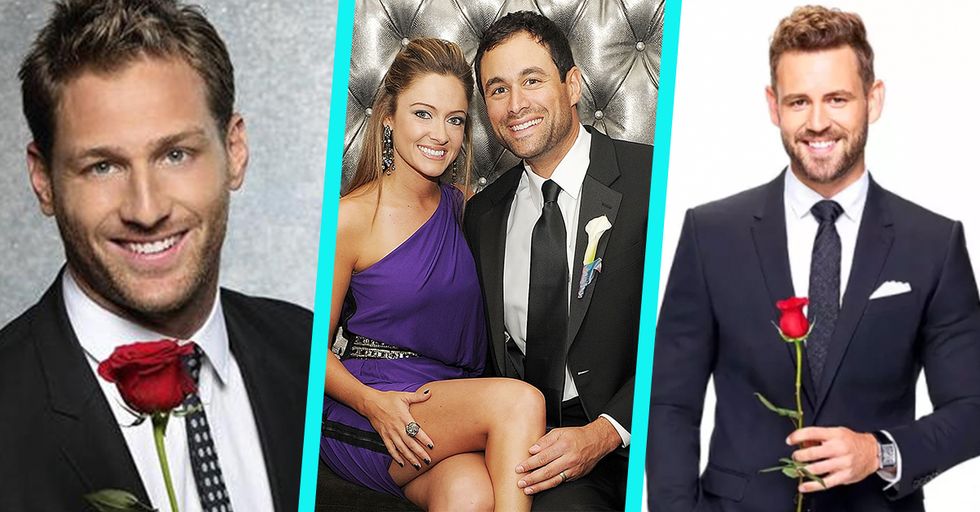 The 10 Worst Bachelors Of All Time, Ranked

The most controversial ranking of competitors doesn’t belong to the Winter Olympics. It belongs to The Bachelor! For 22 seasons, we’ve seen single men come and go on ABC’s schmaltziest dating show competition, with all but a few (okay one) flushing their showmance down the toilet once cameras stop rolling.

Given the fact that Arie is being called “one of the worst Bachelors of all time," we thought it’d be worth taking a look at the even worse dudes that preceded him. Here they are.

Despite The Bachelor’s spotty track record in finding love for its rose-wielding suitors, some Bachelors have at the very least entertained us over the years. This one did not. In fact, he skeeved us out big time. What with his chin-cupping and smarmy flirting, Juan showed us the true meaning of ick. The only redeeming factor about Juan’s season was the coup that the bachelorettes almost waged against him, armed only with pepper spray and curling wands.

Villain to some, rebel to others, Brad ended his first stint on the Bachelor by rejecting BOTH of the final women trotted out before him. He went home alone, spurned by ABC and viewers alike, but lived on in Bachelor history for a time as the one that got away. Although Brad came back to redeem himself in season 15, I still like to remember the guy who thumbed his nose at the machine. Even if he ultimately became part of the machine. He was the anti-hero we need in these uncertain times. Sigh.

He christened the series with his American Psycho looks and matching personality, scaring/enthralling women everywhere into believing this Bachelor experiment just might work. The fact that this is the face that launched 22 seasons still baffles the mind.

He was awful, then he was more awful, then he was maybe a tiny bit not so awful. Nick practically made a career out of starring on some iteration of The Bachelor franchise, finally returning in Season 21 to do some hard core crying, kissing, and rejecting. Also, he gave the worst after show interviews ever. THE WORST. (Did he have a personality chip implanted and removed in between filming and press junkets?)

Holy shit! That was the collective reaction when Jason Mesnick pulled what is now called a “Jason Mesnick" on his final choice, trading her in shortly after the finale aired for runner up, Molly, who he is still happily married to today. Sure, Jason and Molly are the success story Bachelor Nation hangs its hat on, but can the show really be credited with a relationship borne of the hot mess Season 13’s finale was? Thumbs down, Mister.

Ben WHO-nik? Exactly. You were trying to forget him, but here he is. Ben was the hipster answer to too many seasons of “bro" Bachelors. He had the floppy hair, the beachy shirts, and the annoying bouts of indecision we’ve come to expect from He Who Owns Vineyards. He was also incapable of making good decisions, which led to the worst possible match in the end – a woman who went on to write a nasty book about his dumb ass. Oh well. All press is good press…I guess?

Speaking of vineyards…Andrew Firestone owns one too! Or rather, his ultra wealthy family does – along with hotels, real estate development out the wazoo, and probably a castle somewhere. The better looking version of Brad Flajnik, Andrew came off like a 2-dimensional version of a Bachelor cardboard cutout. Looking at him from certain angles, you might think, “Yeah, he seems like an actual functioning adult!" Alas, he turned out to be just as much of a man-child as 99% of our Bachelors are, which we saw when he later dumped Jen Schefft and went on to marry a model.

His name was Byron, as in Lord Byron, The Boring. Although he gave us some sweet moments, like proposing to his #1 gal in Spanish so her Cuban-born parents could understand him, the entire season was mostly an excuse for picturing Byron in better hairstyles while nodding off in between commercial breaks. Plot twist: Byron’s fiancé, Mary Delgado, was brought up on domestic battery charges for allegedly punching Byron in the face in a 2007! Despite the drama, the couple stayed together until 2009, when they broke up.

Fine, we couldn’t leave him off the list after all. I mean, we were promised a sexy racecar driver, and what we got was a horny 36-year old with a limited grasp on adjectives. Have we not suffered ENOUGH?!? Do we not require – nay, DESERVE – a Peter in our lives?!? When Arie was announced as the next Bachelor, a giant question mark went viral through our virtual consciousness. As in: Why the hell are they trotting this dude back out? From what scrap pile of fallen Bachelors did they pull this random wreckage? Oh well. Now, we’re all in this together, so we might as well sit back and relax as Arie makes a giant mess of this season. After all, that’s amazing TV too.