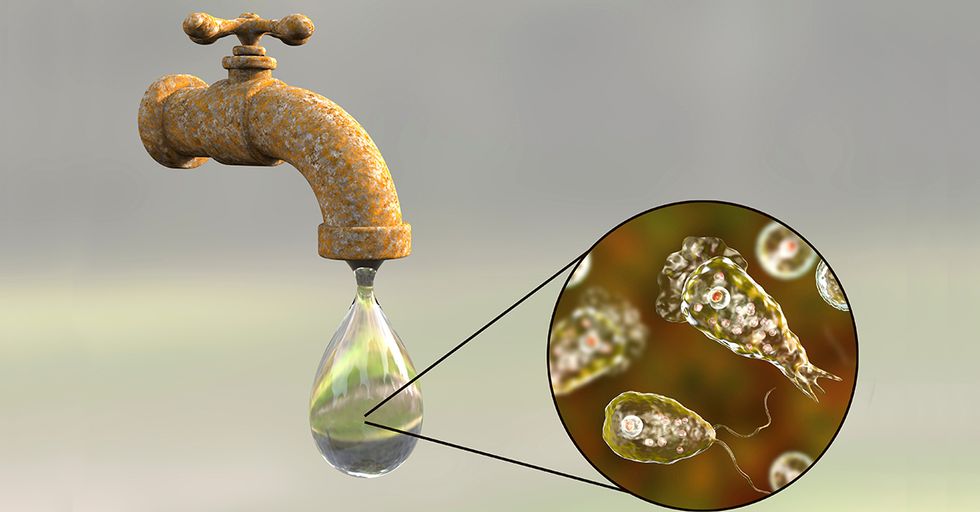 The 12 Scariest Things That Actually Exist in Real Life

There are so many amazing things that exist in the world. There are rainbows and puppies and chocolate bars... you get the idea.

This list isn't about those things. It's pretty much the complete opposite.

I hope you got a good night's sleep last night, 'cause you probably won't be able to drift off anytime soon after you learn about these terrifying things that actually exist in real life.

Take a good look at this picture. What do you see? A lovely babbling brook, right? It looks like the perfect place to have a picnic or maybe dangle your toes into the water. It's only about 6 feet across. Maybe you want to try to jump across?
I wouldn't do that if I were you. That brook is known as the Bolton Strid and according to local legend, every single person who has ever stepped foot in it has been sucked under the current and killed. Just below the surface of the water is a network of chasms and caverns — perfect places for human bodies to end up after they've been swept up by the deceptively strong current.

No, it's not just a silly plot point from Talladega Nights. Invisible fire is real and every bit as dangerous as fire with visible flames. In fact, it's probably more dangerous exactly because you can't see it as it blazes.
As you probably already know, different chemicals and gases burn in different ways and with different-colored flames. Borax burns with bright green flames, whereas copper chloride burns blue. And methanol flames are almost completely colorless. Here's a video of racecar driver Rick Mears' car burst into invisible flames.

You know how hornets are already terrifying? Well, the universe took that into account and apparently thought, "Let's make 'em gigantic, too!" Enter the Asian giant hornet. It's also known as the yak-killer hornet, but don't let that fool you. It's sting can also be lethal to humans (even humans who are not otherwise allergic to hornets). OK, I'm done thinking about these guys. Let's move on to something else.

Stick with me, here. I know what you're thinking. The Sun is great! It makes plants possible, which in turn make oxygen possible. Maybe you've grown accustomed to the Sun you used to draw in the corner of your childhood pictures. Usually wearing sunglasses. But that isn't quite accurate, is it?
That's more like it. If you're not afraid of the Sun, let me just remind you that this thing has the ability to burn you from 93 million miles away. Not to mention the fact that at some point, the Sun may very well explode and kill us all. (By the way, if you're really looking for a good time, do not read the "Timeline of the far future" Wikipedia page, K?)

Do you like walking around, having control over your limbs, and speaking? Well then, Locked-in syndrome is not for you.
People with Locked-in syndrome are fully awake and aware of what's going on around them but are almost completely paralyzed. On the bright side (?), they can still blink and move their eyes around. Usually.

Sleep paralysis is a slightly less scary version of Locked-in syndrome because it generally only lasts a couple of minutes. That being said, if you're a sufferer of sleep paralysis, each episode may feel like an eternity. You may hear things that aren't actually there. This can include hearing hissing or humming or even screaming voices. If you're really unlucky, you can see some kind of supernatural creature sitting on your chest, suffocating you. Interestingly enough, sleep paralysis isn't even the worst thing can happen to you in regards to sleep. That honor goes to the next thing on the list...

People who suffer from insomnia can't fall asleep. People who suffer from Fatal Familia Insomnia (FFI) can't fall asleep...and then die.
People with FFI have insomnia that gets worse and worse. Eventually, they may start having hallucinations, delirium, and confusional states like what you see in dementia patients. The average survival period for people diagnosed with FFI is 18 months. And there's no cure.

Imagine waking up in the middle of the night and realizing there's suddenly a hand around your neck, choking the life out of you. Now imagine that that hand is your own.
That's an example of something that can happen to people who have Alien hand syndrome. On the bright side, most people with the syndrome don't experience things like self-choking. But it's a possibility, and I think we can all agree that this is creepy as all get-out, right?

Maybe you consider your life to be pretty safe. You wear your seatbelt, exercise regularly, and stay away from junk food and water containing brain-eating amoebae. As it turns out, though, it might not matter.
While rare, Sudden Adult Death Syndrome (SADS) is exactly what it sounds like  — sudden, unexpected death that occurs in adults. The condition affects people who appear otherwise healthy.

I'm gonna tell you the good news first: The Bigfin squid won't kill you! (Hooray!) But that doesn't stop it from existing and haunting your nightmares!
The Bigfin squid lives in the deepest parts of the ocean and has only been spotted a handful of times. So that's even more good news. But look at those arms! They can be up to 26 feet long! That's gonna be a big ol' NO THANK YOU from me.

(Note: This picture is a screenshot from this video which shows the worm in action. I don't recomment watching it but I guess I can't stop you.) These parasites typically lay eggs in water. Bugs drink the water, and badabing badaboom —  they now have a parasite. The eggs eventually grow into a worm which makes a beeline for bug's brain. Then the worm takes over the bug's brain and makes the bug kill itself by drowning. And the entire cycle starts all over. But don't worry. They don't go after humans. Usually.