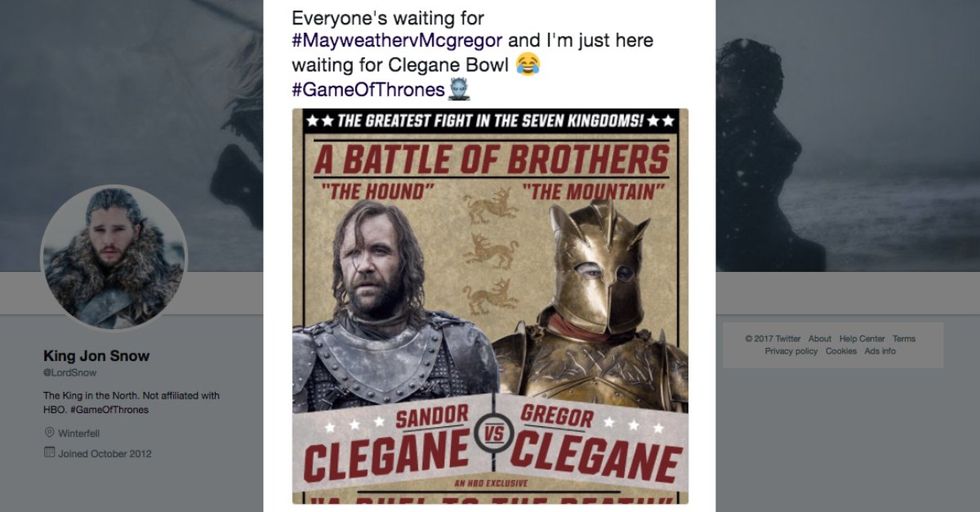 Last night's Game of Thrones finale was nothing short of crazy. From the King's Landing get together, which was essentially the worst family reunion of all time, to the undead dragon blowing blue ice-fire, the finale was a non-stop thrill ride of OMG moments, and obviously, the Internet was up in arms.

From the die-hard fans to the vocal detractors, there was no shortage of reactions to the episode...

First up, that super terrible pow wow in the Dragon pit at King's Landing.

Everyone was like, "Wait, are you trying to kill me? Or is it you? Oh wait, everybody wants to kill everybody. Cool cool, just making sure."

And don't forget Euron's reaction when he found out wights and White Walkers were land-only creatures.

Never seen anyone peace up out of a meeting that quickly. It was like the Dragon pit was his office and he just discovered it was 3pm on his last Summer Friday.

Next up, Littlefinger's death scene.

Considering he had absolutely no idea he was about to die painfully by way of the dagger that started the whole feud between houses, Littlefinger's WTF face felt more than appropriate. With that in mind, we fully support the nomination for Littlefinger to replace Blinking White Guy.

And then there's that sexy incest scene.

We know how that sounds, but seeing Jon and Dany finally get it on after an entire season of slow building sexual tension was pretty satisfying. At least we know they don't know they're aunt and nephew yet, so that makes it... sort of better?

And if you think the news we got about Jon's parentage is going to deter us from shipping this relationship....

Anyone else feel like The Hound carried the wight crate just to show his brother he was still buff?

TBH it felt totally unnecessary, but I guess if my brother was a Frankenstein monster in armor who had once pushed me into a fire, I might be kind of bitter too.

Superbowl LII? No thanks. We'll be here placing bets on The Mountain vs. The Hound.

Also, just stop underestimating the badassness of the Stark sisters.

They didn't go through 7 seasons of actual garbage to execute each other in their ANCESTRAL HOME. Have a little faith.

We also saw Sam Tarley come back to Winterfell, which was pretty neat, except the only person he could find was Emo Stark who refuses to go by his given name now that he's an all-seeing eternal Raven.

Feels as if like Sam was like, "You're very weird now, Bran, but tip of the hat to you for knowing everything that's ever happened in the universe. Not gonna fight you on that one."

Overall though, people are just really upset about having to wait another year to see their favorite show again.

Because seriously, WHAT HAPPENED TO TORMUND. He needs to be okay so he and Brienne can have enormous, battle-ready children who conquer the Earth with loyalty and great hair.

HBO, why must you do this to us?

We are all Pablo Escobar, alone, on his lonely compound in this scenario.

We are also all sad Jon.

Waiting patiently for Sunday nights to be less awful again.

To be honest, 2 years is just like, a rude amount of time to make us wait.

But like the (still living) watchers on the wall, our watch has not ended.

Many agreed that this was their favorite season yet.

And they wouldn't be wrong.

Anyway, in the meantime....