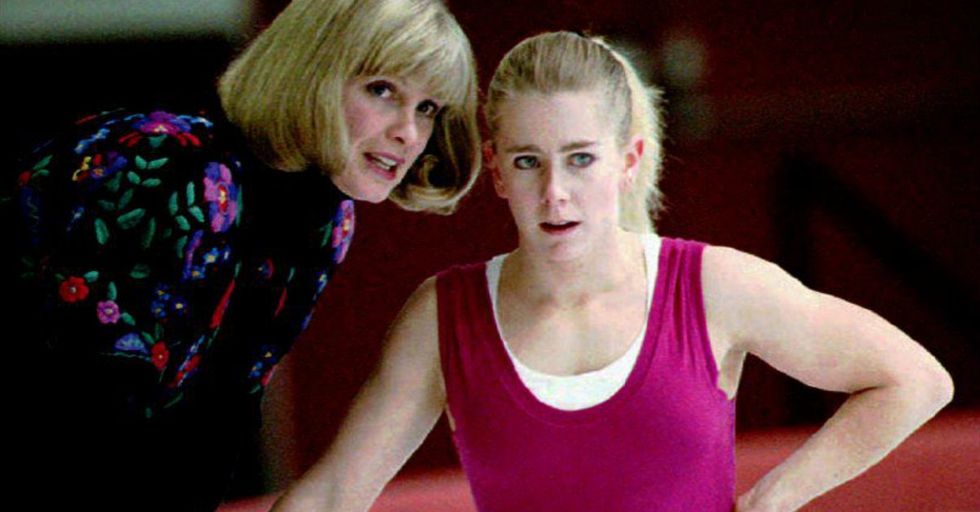 The 15 Craziest Moments from 'Truth & Lies: The Tonya Harding Special'

Truth & Lies: The Tonya Harding Special aired on ABC tonight and we were very, very there for it. With the release of the movie I, Tonya this December and the impending (and probably much less scandalous, but there’s still time) Winter Olympics this February, the time is right for once again bringing up one of the craziest stories in professional sports. If you aren’t familiar with the basic details of the Tonya Harding-Nancy Kerrigan figure skating/leg bashing scandal of 1994, please review here. And then join us as we give a run down of every crazy detail in Truth & Lies.

The special starts with accusations that Tonya’s mother was abusive.

As ABC puts it, Tonya grew up on the “wrong side of the tracks". She practiced skating in a public skating rink in a mall in Portland, Oregon. Her mother worked several jobs to support her and her skating, but according to Tonya, she was also abusive. In the special, Tonya claims that he mother beat her on multiple occasions and at one point threw a steak knife at her. In an interview, her mother claims that Tonya is lying about the abuse and that she never threw a knife at her. She says, “No, why would i throw a steak knife at anybody. She’s lied so much, she doesn’t know what isn’t a lie anymore" To which Tonya cooly responds, “Take a lie detector, biotch, prove it, because I will."

She’s funny. She seems calm and collected throughout the interview. At one point interviewer Amy Robach asks her if she cares what people think about her and Tonya sarcastically replies that she doesn’t, only to then roll her eyes and admit: of course she does. But at the same time she also doesn't seem very...sorry about what happened to Nancy. Maybe it's because it's been 23 years of America hating her, which honestly would be understandable, but she does kind of come off as a little chilly about the whole thing.

Despite her mother and against all odds, Tonya managed to become one of the best figure skaters in the country.

For a time, Tonya was the only person in the country who had ever landed a triple axel in competition. The special shows the famous video of her landing it, as soon as she pulls it off, her face lights up and she throws her arms in the air. She has these thick, muscular legs that would give most of the annoying Crossfitters on your Facebook timeline a run for their money. It’s no wonder she can jump so high, spin so fast. But after that moment, according to Tonya, her life changed entirely. She says in the special, “Everything about life after that point became confusing."

Soon after, she met Jeff Gillooly, the man who would eventually plan the attack on Nancy Kerrigan.

Tonya says in the special that they met at the ice rink, where he would come to watch her skate. But things turned sour quickly. According to Tonya, he became abusive. She tells a story of the first time he hit her: when she bought nachos at a 7-11, he knocked them out of her hands, called her fat, and hit her across the face. “I didn’t have a pair of pants back then, I had a skating dress," says Tonya. Others in the special suspect that once Jeff started seeing money come in from Tonya’s skating, he became obsessed with making sure she was going to win. In the special, Tonya claims he once pointed a gun at himself, and then her, and pulled the trigger. He didn’t hit her, but she was scared for her life. But Tonya says, “Nobody believed me ever, for any abuse, ever."

The special also likes to point out that Tonya was a little bit irresponsible, she smoked cigarettes and arrived at the Olympics a week late in 1992.

But like, who hasn’t been 22 years old? Most of us could barely make it to Biology class on time at 22, much less France. And this was kind of the charm of Tonya Harding, she wasn't an ice princess, she was just like us. In the special she talks about how she hated wearing skating dresses, she would rather wear Levi's. She liked working on cars. She has an edgy double pierce.

In 1994, just before the Olympics, a man attacked Tonya's competitor Nancy Kerrigan as she was getting off the ice at a practice in Detroit.

The man ran up to Nancy and hit her several times in the leg with a police baton. One thing you may not have known about that attack: instead of just running out the door he then ran through a glass door, shattering it. Everyone thought it was just a crazed fan, but it turned out to be a friend of Jeff Gillooly’s, Sean Eckhardt. Sean Eckhardt claimed he was Tonya’s bodyguard, but Tonya shuts that down pretty fast in the special, calling him "dumb as a post." Which may not be so far from the truth considering this is a man who chose to shatter a glass door with his head instead of the police batton he was holding after attacking Nancy Kerrigan and apparently used his own credit card and his real name to check into a hotel in Detroit when he stayed there for the hit.

So after this is when things start to get really crazy.

This Tonya Harding special as both horrifying and fascinating at the same time and I can't look away. #TonyaHarding https://t.co/HnvAdBvO8H
— Jay (@Jay)1515724529.0

Nobody suspected Tonya until they found out that she knew Eckhardt. This is only a few weeks before the Olympics which both Tonya and Nancy have now qualified for despite Nancy’s injury and the suspicions that are now starting to stir up around Tonya. The girls are going to have to compete, together, at an Olympic games even though Tonya maybe got a large man with an inability to walk through sliding doors properly to hit Nancy Kerrigan in the knee with a police batton. It’s wild.

What’s even more wild is that Tonya has to go home to Oregon to practice on her home rink, which if you remember, is located inside a shopping mall.

So every time Tonya goes to practice, the entire mall is filled with people watching her including reporters, fans, and probably people who are like “wow, I picked a really bad time to go to Claire’s"

Then two weeks before the Olympics, Gillooly pleads guilty to assault charges and Tonya admits that she found out he was involved after Nancy was hit and didn’t say anything.

But because this is basically a movie, Tonya still goes to the Olympics in Norway. According to her, she felt she had every right to be there because she had earned it.

The girls compete and Nancy wears the same outfit she was attacked in!

She breaks out the infamous white lace leotard and you better believe it was on purpose. (Or at least the people interviewed in the ABC Special do). Tonya doesn’t do much to help her image: she pulls off her microphone and leaves during an interview with Connie Chung.

When it’s Tonya’s turn to skate, she’s nowhere to be found.

The clock starts ticking down, and if Tonya doesn’t show up, she’s going to be disqualified. I’m not making this up, this is really what happened. According to Tonya, her laces were malfunctioning. She runs out onto the ice seconds before she would be disqualified and starts skating but then her laces break (maybe? Or they are too short? It’s kind of unclear but something goes on with her laces) so she skates over to the judges and tells them, and they let her start over. She doesn’t do so hot. But Tonya says in the special, “I did the best I could under all the circumstances."

In an amazing twist, neither girl ends up winning the gold!

Oksana Baiul, a Ukranian skater, ends up getting gold, Nancy gets silver and Tonya gets a devastating 8th place. But according to Tonya in the special, she thought Baiul deserved the win. This may be personal bias, but looking at Nancy Kerrigan from a 2017 perspective, she does kind of seem like a mean popular girl from a Mary Kate and Ashley movie. America got to see a glimpse of this Nancy soon after she lost to Baiul, when a camera caught her complaining that Baiul was holding up the medal ceremony because Nancy thought she was re-applying her makeup. She said, "So she's going to come out here and cry again, what's the difference?"  Of this comment Tonya said in the special, "She needed to stop whining, let the gold medalist have a few minutes to absorb it. She just won the Olympics, give her a few minutes... I just thought that was rude of her."

Tonya ends up pleading guilty to hindering the prosecution after she returns home but not before an insane accusation based on trash.

A restaurant owner ends up finding a bag of trash in her dumpster that contains a handwritten note by Tonya with the name of Nancy’s practice facility on it, but it’s never proven that Tonya actually wrote it. According to her in the special, Tonya says it wasn’t her that wrote the note. Tonya ends up getting banned for life from figure skating, has a leaked sex tape, gets into boxing and wears an awesome shirt that says “No Comment". Life definitely wasn’t easy for Tonya once she got home. She became a national villain. But according to Tonya in the special, she doesn’t hold bad feelings for Nancy. She says, “She’s got her life, I’ve got my life, we both have wonderful lives and that should be all that matters."

The special ended with Tonya on the rink, doing jumps, spins, and generally looking pretty badass. She’s not allowed to coach or compete professionally, but it hasn’t stopped her. Tonya says of her life since the scandal, “The only thing you can do is take one step forward everyday into your future and do the best you can."

Nothing will ever bring me greater joy than this photo of Tonya Harding dodging a reporter while wearing a sweater… https://t.co/8HPx5uXLpu
— keaton kilde (@keaton kilde)1512752773.0

The special doesn’t exactly answer this question, but it does reveal one big piece of previously unknown information. Tonya claims that she had in fact heard Gillooly and his friends talking about taking out a skater before the incident, but she still claims she had nothing to do with the attack. So maybe we will never know. But for now, please let us know if you have access to that No Comment t-shirt.