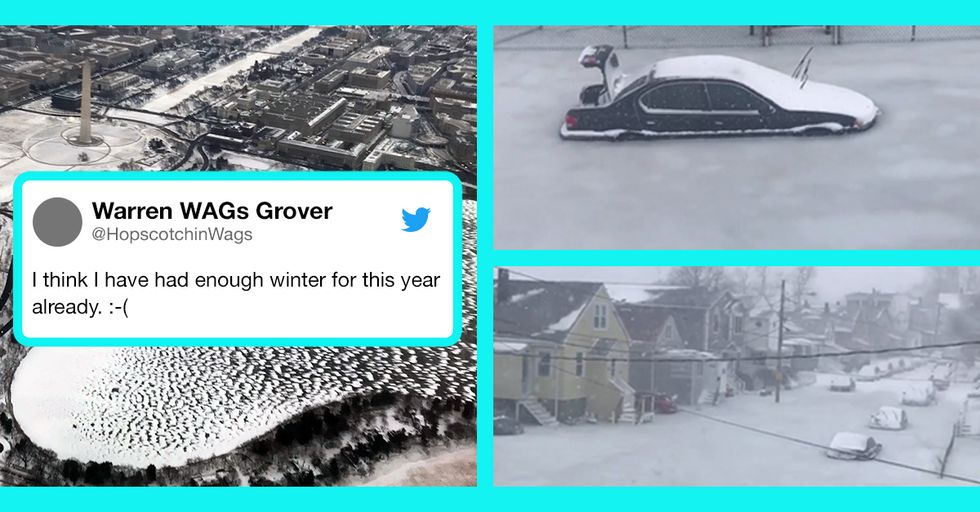 Have you ever heard of thundersnow?

No, I didn't  make it up – it's a real thing, promise. Thundersnow is when there's lightning and thunder during a snowstorm. It happened this week in New England. Scratch that. A LOT of things actually happened this week, all across the Eastern and central portion of the United States, because why?

Because thundersnow, that's why!

In case you've been living under a rock (or on the West Coast), a historic cold front hit the East Coast this week.

It was caused by a "bomb cyclone," another weather-related word I had to look up because it didn't seem real.

What is a bomb cyclone, you ask? Well, my dearest darling, pull up a chair and let me – well, Time – soothingly explain very complex weather phenomena.

The morning after yesterday's peak, the extreme #bombcyclone and its influence in the atmosphere downstream to… https://t.co/528sPfknVd
— Stu Ostro (@Stu Ostro)1515165455.0

According to Time, "a bomb cyclone, scientifically known as an explosive cyclogenesis, typically brews over the water where drops in barometric pressure can make it an extra forceful weather event."

Alright, I'll level with you here. No idea what the heck cyclogenesis is.

Point is, the bomb cyclone hit the Eastern front with all the power of – well – a bomb cyclone.

Consequently, it gave the US the coldest weather it's seen in 100 years, as well as a few very peculiar and tragic side effects.

The first horrific side effect of the winter weather were the deaths.

Winter Storm Grayson, which is what meteorologists are calling this chilly advent of nature's fury, has killed 12 people thus far, and not for the reason you think.

When you are exposed to the cold air... your body attempts to protect the core, which explains why your hands and feet get cold first. Your body also begins shifting where it allocates fluids, which causes you to produce urine and explains why standing in the cold causes the urge to pee. This will also make you slightly dehydrated, said Tipton. Your blood will essentially thicken in the cold, making blood clots more likely, especially for older people who are prone to the condition.

As an antidote, wear warm clothes, stay inside where it's warm, and maybe pull out that bottle of whiskey you've been saving for a special occasion. It's a blizzard out there.

If deadly cardiac side-effects weren't enough, Grayson is also coming for your electronics.

That's right, your precious cellphone is under threat. Why? Because the darn thing won't turn on. People on social media are reporting that it's so cold, their precious iPhones are failing to boot. The horror.

Cellphones aren't the only piece of tech affected by the bomb cyclone, 'Ol Betsey is at risk too.

Who is 'Ol Betsey, you ask. Why, it's your car, your ride, your Jalopnik (is that a real word for car? Seems like it). And don't pretend you don't call your car 'Ol Betsey or some other weird name either. In any event, poor 'Ol Betseys all across the Eastern seaboard are frozen solid. You know what they say – when it snows, it freezes.

You know what else the snow is affecting? The wildlife. To be specific, sharks.

The apex predators of the oceans are getting owned by a bigger, badder predator than they ever anticipated - Storm Grayson, which is literally turning them into sharksicles. NPR reports that frozen thresher sharks are washing up on Cape Cod. They cite the  Associated Press, which writes: "Authorities believe all the sharks succumbed to cold shock. Cape Cod Bay's surface temperature sank to 41 degrees last week. Scientists believe thresher sharks are impaired when exposed to waters below 44 degrees."

Sharks aren't the only cold-blooded creatures falling victim to the cold, iguanas also aren't thriving either.

The poor dears are literally dropping out of trees in Florida. As Ron Magill, a spokesman for Zoo Miami, told The New York Times, iguanas roost in trees for the night, but when "the temperature goes down, they literally shut down, and they can no longer hold on to the trees." Which means it's raining iguanas in Florida.

Burmese pythons, those dreaded exotic invaders, are also suffering the ill effects of the cold.

Being coldblooded reptiles, the poor slitherers don't do well in cold snaps. As NPR notes, they "took a hit in 2010," which was the last time Florida had a considerable cold snap.

The cold snap is bad for reptiles all around, because the sea turtle is also in the mix.

"When the water temperatures drop, stunned sea turtles may float listlessly in the water on or near shore," the Florida Fish & Wildlife Conservation Commission said in a statement quoted by the Miami Herald.

Heartbreakingly, our pets are also suffering the effects of the cyclone.

Multiple reports of outside pets being found frozen solid have dominated the media. Dogs, especially, but also cats and horses too. If you love your pet, keep her inside during this brutal winter snap.

Awards season is starting, but many East coast airports are either shut down, or operating at limited capacity. The New York Post reports:

The weekend of parties leading up to Sunday’s [Golden Globes] awards ceremony kicks off Thursday with W Magazine’s annual bash at the Chateau Marmont, where guests are expected to include Jennifer Lawrence, “Wonder Woman" star Gal Gadot, Mary J. Blige, Salma Hayek and others. But the guest list could dwindle if snowbound New York VIPs can’t make it.

However will we cope?!!

The bomb cyclone is not all bad news, however.

Some people are living their best life ever.