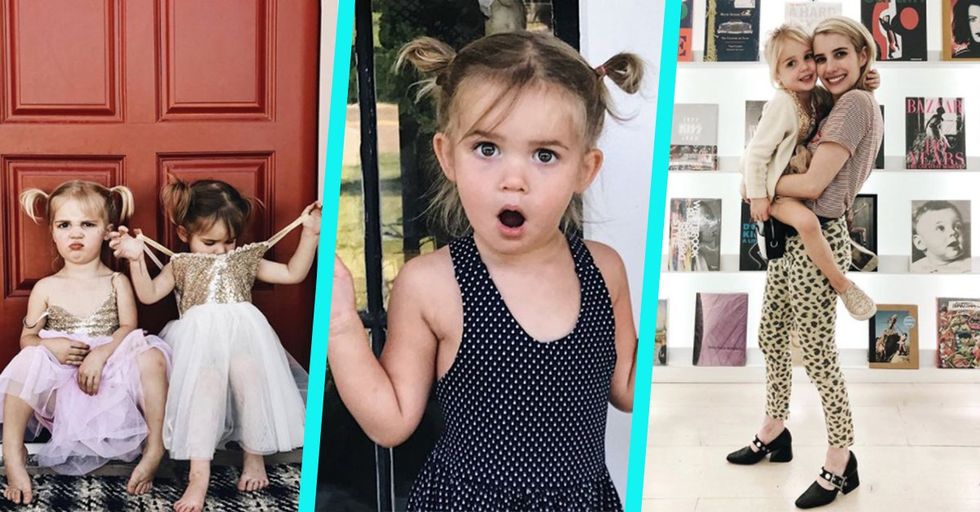 The 15 Weirdest Details About the Lives of Child Instagram Influencers

The term "Instagram Influencer" is nothing new. Since the boom of Instagram and its popularity, we've seen influencers pop up more and more. If you're confused as to exactly what an influencer is, don't fret. It's basically those really beautiful people on your feed with thousands and thousands of followers who get paid to literally just post pictures and travel.

But because the world is constantly one-upping itself, there is now such a thing as a baby influencer.

Are we in an episode of Black Mirror? Here are 15 of the craziest details regarding what it's like to be an Instagram influencer and still need to have a nap time.

They get stopped on the street all the time.

Mila Stauffer is famous and she's only 3-years-old. Thanks to her mom, Katie, Mila has a following of over 3 million. THAT'S INSANE. SHE'S A TODDLER. In a piece for BuzzFeed, Stauffer explained how her Instagram-famous daughter once got kissed on the cheek by a man while walking down the street. "I would never do that to a little kid. But they were from, like, France, where that’s normal. Like, that’s how they greet people or whatever," Stauffer told BuzzFeed. Ummm, okay.

People invite them to fly across the country.

When Mila first started getting attention, she had invites pouring in for her to come out to Los Angeles. "Can you guys come to LA the first week of March?" a person commented. "I’ll be there then and I’d love to meet you guys!"

People want to take a picture with them even though they're just 3-years-old.

And it happens so much that Mila has started to preemptively approach others, knowing they'll want a photo. "Whenever we’re at the store, sometimes she’ll go up to someone and say, 'Do you want to take a picture with me?'' Stauffer told BuzzFeed News. You have to wonder who these people are that want photos with a toddler.

Their mom will be able to quit her job.

This is perhaps the most wild. Stauffer's full-time job is to now just manage her daughter's Instagram presence. And she's got her hands full; Mila is the most featured, but her twin sister Emma shows up quite often, too (although she's a little more camera shy).

They'll make potentially hundreds of thousands of dollars on Instagram posts that they have no idea how to create.

When asked about how much money Stauffer makes off of her daughter's pictures, she didn't answer. However, the CEO of the influencer marketing agency, Mediakix, explained how it works: "Instagrammers of her size can get paid anywhere from $10,000–$20,000 per post, depending on the brand and campaign/partnership," they said in an email. "For video posts, the rate is higher, but ranges vary more for video based on the brand requirements." That is a lot of money...

They can make their families more money than their parents' careers.

Stauffer told a Fox news outlet that she made more money with Mila's pics than her husband made as a doctor. This is the world we live in, people.

Some of the top influencers can make half a million dollars a year.

It all comes from brand sponsorships, which also makes things complicated. It's often hard to tell when an influencer posts a genuine snapshot of their real life, and when they're posting an ad.

Baby influencers are held by celebrities.

Like this picture of Emma Roberts holding Mila. Does she even know who is holding her? Does she realize that she is not like other 3-year-olds? So many questions.

When making an Instagram video, a baby influencer will be fed the lines from their parent.

And it will often take awhile to make. For instance, Stauffer explained that if Mila isn't in the mood for a video, she's careful to not force her to make one. It can take up to 3 days to complete a video.

When that happens, Stauffer often tells Mila that she'll get a treat if they complete the video.

"There’s definitely been times when like, 'Please, if we do this, we could just go get ice cream,'" she explained. "Cause Emma just is a little bit difficult, when it comes to pictures and stuff. She just doesn’t want to do it." Ice cream in exchange for a post that will pay around $10,000? Sure, count me in!

They also have a set number of photos they need to get to sponsors in a day.

Stauffer explained to BuzzFeed that on an average day she has to take x amount of pictures for sponsors, but also takes normal photos so the feed doesn't feel too branded.

And sometimes, it can only take 5 or so minutes. It all depends on how cooperative Stauffer's children are being.

People are very invested in the life of Mila and her sister, Emma.

According to BuzzFeed, one woman told Stauffer that a video of Mila helped keep her from committing suicide. They've done paid partnerships with tons of companies like Amazon and Duracell.

They even have meet-and-greets with their fans.

Stauffer's also had some interest from Hollywood. "There are talks with real companies for a TV show that Kaitlin [Stauffer's older daughter] would be more writing and be in, and it would be a sitcom," Stauffer said.

Despite the negative feedback that comes with the fame, Stauffer refuses to pay attention to those judging her.

"Most people have jobs — this just happens to be mine. And it’s like it’s not acceptable [to some people] and it just kind of sucks," she told BuzzFeed. Whether you agree with Stauffer or not, it's bizarrely mesmerizing to know that we live in a world where a toddler can have a social media following of over 3 million. Welcome to the future.